Like Beer? The Craft Brewing Scene in Greeley is Hoppin’

Raise a frosty glass – or even an entire pint – to Greeley's five craft breweries. 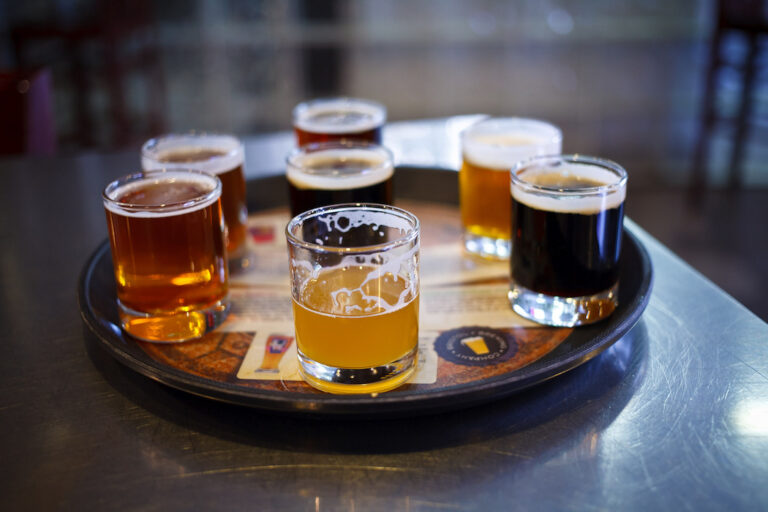 Beer enthusiasts feel right at home in Greeley. The city has five craft breweries, each serving up unique, flavorful brews created with quality in mind.

Established in 2006 as Greeley’s first craft brewery, Crabtree Brewing Co. offers seasonal flavors – like Chunkin’ Pumpkin in the fall and Cucumber Ale in the summer – as well as year-round options such as Oatmeal Stout and Ginger Bee. Prefer to enjoy your beverage of choice at home? Both growlers and pints are available in a variety of flavors.

Crabtree also has a tasting room where visitors can sample all the current on-tap options, and every Friday at 6 p.m., the brewery hosts Firkin Friday – an event that allows attendees to try various cask-conditioned beers, which are carbonated by a slight fermentation. Other weekly events include trivia and game nights.

Downtown Greeley’s Brix Taphouse and Brewery serves up a rotating selection of 60 craft beers from Colorado’s top breweries, as well as a selection of original Brix brews. Brix-made options include the Schriver Pilsner, Blondie on the Block, Anniversary Ale (an Irish red ale) and Horne’s Bookstore Porter.

Hungry? Brix offers tapas like bacon-wrapped dates and pretzel bites, flatbread pizza and paninis, and Belgian waffles are served every Sunday for brunch. The taphouse and brewery also hosts weekly events such as “Painting and Pints” on Mondays, live music on Wednesdays and trivia on Thursdays.

Also located in downtown Greeley, Wiley Roots Brewing Co. uses as many local ingredients as possible to create its craft brews. Wiley Roots, founded in 2013, has a selection of flagship options including the Super 77 Wheat; Deep Roots Chocolate Porter; Red Wiley, which has a slight caramel sweetness combined with an American hop profile; and Off the Tracks IPA, a refreshing, citrusy beer. Seasonal brews, such as Apumpalyptica – an imperial pumpkin ale brewed with locally grown pumpkins – are also available.

While Wiley Roots doesn’t offer food items, patrons are welcome to bring their own or have meals delivered, and food trucks are typically on site during the spring and summer months. Brewery tours are available by appointment to parties of 10 or more at no cost, and various special events take place each month.

WeldWerks Brewing Co. serves its craft concoctions in the heart of downtown Greeley’s Creative District, with brews like the Raspberry Hefe and Coffee Stout on tap. Open since February 2015, the brewery is the newest addition to the city’s craft beer scene.

Like Wiley Roots, WeldWerks doesn’t serve food, but guests can bring their own or have food delivered to the brewery – and a selection of area restaurants partner with WeldWerks to offer a discount to customers ordering from the taproom. Weekly events include an all-day happy hour on Mondays, “Bites and Brews” on Tuesdays, trivia on Wednesdays, and live music and food trucks on Fridays and Saturdays.

Seasonal brews are also on tap, and the brewery hosts weekly events like trivia on Mondays and Wednesdays, open mic nights every Thursday and live entertainment on the weekends. Although food trucks are often on site, patrons can have food from area restaurants delivered to Broken Plow, too.