In other parts of the country, farm-to-table is a trend. In Des Moines, it's a way of life. 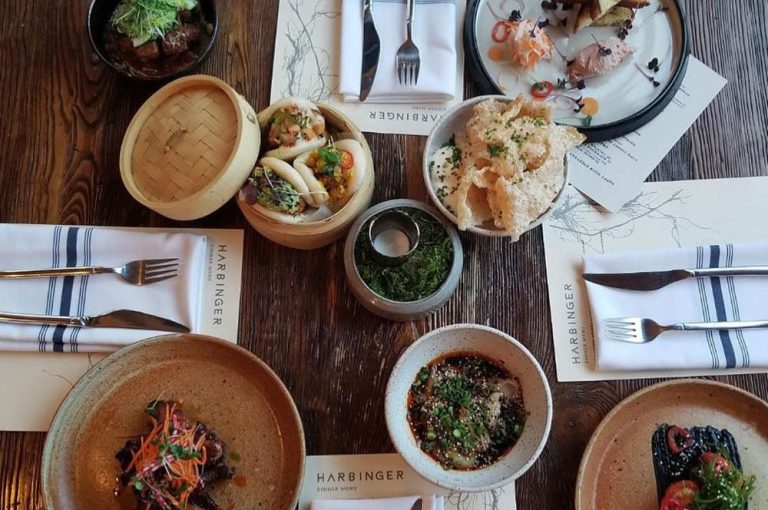 Folks love to dismiss the middle of the country as flyover states they pass on the way to other, more interesting spots. But the people of Iowa have a secret that’s just starting to get out: we eat better than most anywhere in the country.

Who wouldn’t want to live close to all the freshest ingredients? On the coasts they love to talk about farm-to-table cooking as a culinary movement, but here in Iowa, that’s just the way of life. We know where our food came from, have often talked to the farmer and know that when a restaurant talks about local ingredients, they actually mean the farm down the road and not somewhere within 200 miles.

We’re laid-back, but we also have serious respect for farmers and farming and we appreciate restaurants that put the spotlight on flavorful, fresh ingredients and let the fabulous flavors of well-grown and raised food shine. Nowhere does that better than Harbinger, where the menu is vegetable-focused and everything from the bar top to the plates were made in Iowa. You’ll find international influences, but ultimately, Harbinger is about celebrating home.

The Iowa Taproom works on the same principles. This large beer hall is in an old tire manufacturing building that dates back to 1882 and has a bar top salvaged from the 1880’s, reclaimed wood, historic signs and more pieces of Americana that celebrate all things Iowa. There’s a repurposed grain silo from which more than 100 beers are on tap (!) and all are Iowa-made. The massive space has all kinds of hidden treasures that bring back local nostalgia. You’ll find the very best in Iowa beers here and they only have plans to add more taps.

We also know that the best food doesn’t have to come with a big price tag. The food scene in Des Moines reflects that with options for every budget. There’s just as much amazing food available at small cafes and pizza joints are there is at some of the best restaurants in the state. Food snobs might not have Des Moines on their radar as an up-and-coming food city, but that’s their loss. It just means shorter wait times for the rest of us.

We can’t imagine missing out on the delightful, unbelievable and maybe over-the-top deliciousness of a night at Fong’s Pizza. Crab Rangoon pizza might not be traditional, but it’s also not to be missed. We never knew we needed a tiki bar cocktail lounge pizza place, but now we don’t know how we’d live without it.

Fong’s isn’t the only place serving up tasty drinks to accompany their eats. There’s been a bit of a cocktail renaissance here and there’s something for everyone. It’s not just cocktail bars or lounges, though we have those, too. You’ll also find an extensive and interesting cocktail list with a stellar food menu at many of the newest and most delicious spots in Des Moines.

When you’re feeling swanky and looking for an upscale and sexy night out, check out the unique cocktails and food with a view high above the city at Republic on Grand. The views of the sunset are spectacular and the cocktails are unlike anything you’ve ever tried to mix together yourself. In summer, you’ll have a front-row-view of the fireworks that follow Iowa Cubs games.

There’s a delightfully irreverent gift shop based in Des Moines called Raygun where you can buy t-shirts emblazoned with slogans like, “Des Moines: French for ‘The Moines’” and “Iowa: 75%… END_OF_DOCUMENT_TOKEN_TO_BE_REPLACED

RoCA is combining old-school standards like Sazerac and beef carpaccio with house-made Aquavit liquor and empanadas. It’s a nod to the smoky lounges of the past, but brought into today with fresh ingredients, unique recipes and an industrial vibe in its repurposed home.

When you’re feeling like relaxing with friends in a laid-back atmosphere, check out the mid-century, retro lounge vibe of Hello, Marjorie. An homage to one of the owner’s grandmothers, the cocktail list is an updated throwback full of gin, Galliano and rye whiskey. The large space feels like it could be in someone’s vintage basement and there’s just a really cool, easy-going vibe that permeates the space.

That same welcoming, feels-right-at-home vibe is what makes Firetrucker Brewery such a popular spot. Iowans are no strangers to great, hearty beer, but Firetrucker is more than just a craft brewery. Located in an old firehouse that locals say used to be the center of town, Firetrucker has that small-town pub atmosphere where it feels like a gathering place. It’s spot near the High Trestle Trail makes it a popular stop for bicyclists and the large outdoor beer garden is the perfect place to soak in the sun and while away a few hours.

There must be something about serving up suds in unique locations here in Des Moines, because when Peace Tree Brewing out of Knoxville decided they needed a local taproom, they converted a WWII era Quonset hut. The unique, industrial spot has a curved ceiling, a wall of windows and some of the most interesting beers made in the state. Known for their Belgians and sours, you won’t be disappointed by anything they have on tap.

The city is only improving from drawing in businesses like Horizon Line Coffee, whose owners left southern California for the pace, affordability and charm of Des Moines. Now a standard part of many Des Moisners days, this local shop that roasts their beans on-site is the perfect example of what makes this city so great.

Des Moines is an interesting and eclectic city and the food and drinks scene really reflects that. From great cheap eats thanks to Drake University’s college population to James Beard-nominated chefs elevating simple, Midwestern staples, you really can’t go wrong when you go out to eat. Far from boring, the vibrant and unique energy is pulling in folks who love the low cost of living, abundance of ingredients and opportunity to become a part of the community.

Capital City airport is known as the gateway to Iowa and beyond.