Transformative projects are boosting quality of life and economic opportunities in every corner of the state. 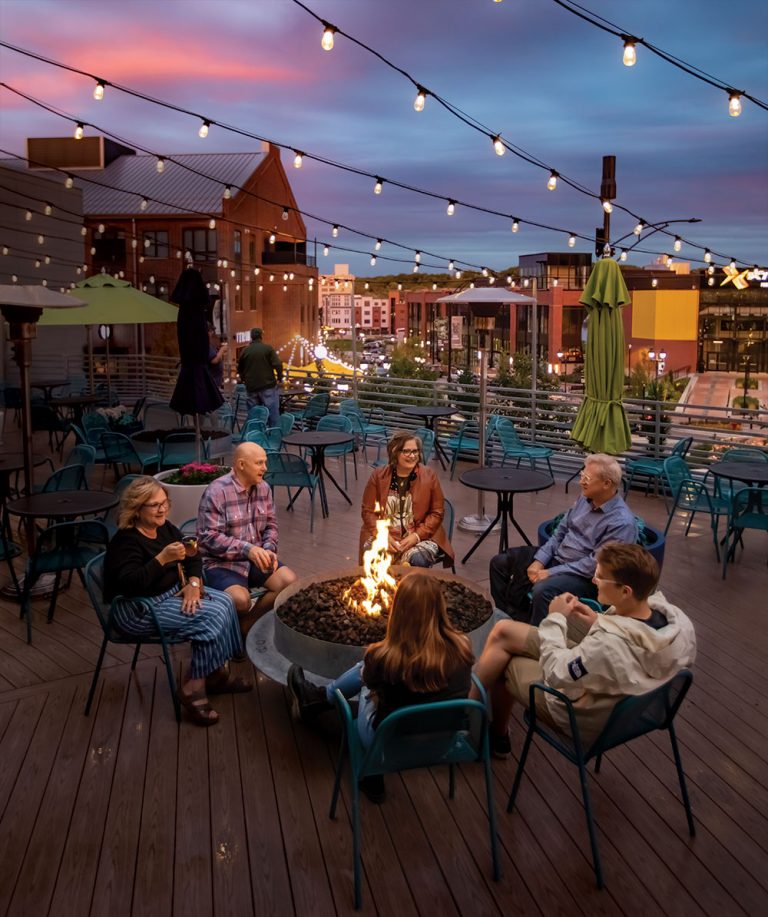 Iowa is investing in its community spaces and experiences. Downtowns, parks and gathering places are being renewed through local-, regional- and state-level funding. Transformative projects through initiatives like the Iowa Reinvestment District Program are improving quality of life and economic opportunities in every corner of the state.

In 2021, for example, the program committed to reinvest $100 million in new state hotel/motel and sales tax revenues in approved districts.

In Iowa City/Coralville, a $12 million state reinvestment resulted in the ongoing development of the Iowa River Landing. This premier destination connects downtown Iowa City and the University of Iowa to a mixed-use district of residential, retail, dining, health care, cultural and outdoor recreation spaces, among other things.

“The convenience of having an all-in-one neighborhood is an attractive environment. It differentiates us from other communities,” says Nick Pfeiffer, vice president of marketing and communications for Think Iowa City.

In 2020, the Xtream Arena & GreenState Family Fieldhouse became the
newest major regional attraction. Home to the Iowa Heartlanders hockey
team, the Xtream Arena hosts major musical artists, the University of Iowa
volleyball team and other large-scale events. The fieldhouse also serves
as an economic engine, bringing a steady stream of visitors
to the area’s plentiful restaurants and hotels.

Reinvestment District funds are being used for revitalization projects in Des Moines, Waterloo, Muscatine, Mason City and Grinnell, among other communities. Small businesses, like the Grin City Bakery in Grinnell, are flourishing after facade and infrastructure improvements were made downtown.

Grin City Bakery is housed in what was once a blacksmith shop that was built in 1917. Prior to the bakery utilizing the space, it housed a dairy, a beauty salon and other businesses.

The city identified a need for a bakery downtown, and a father and son, Bill and Andy Molison, went into business together to fill the void, opening Grin City.

“We sell out every day, literally every day,” Bill says. “The City of Grinnell has paid close attention to their downtown retail and historic district. The return of a bakery has been on the top of everyone’s list.”

All Smiles in Grinnell

According to Rachael Kinnick, president and CEO of the Grinnell Chamber of Commerce, development in Grinnell is focused on mixed-use projects in its Historic Downtown and Campus Confluence Reinvestment District. In this area, where Grinnell College and the area’s downtown intersect, funding has provided a new stage, a pavilion and play areas at Central Park. “Community pride and usership are up,” Kinnick says. “It’s encouraging people to get out and explore it.”

Visitors and residents are also enjoying the Hotel Grinnell and event space after its creative renovation. Built in 1921, it originally served as a junior high school until 1978 and was later used as office space for the city before being revamped as a hotel.

“It’s been a wonderful addition to our downtown space,” Kinnick says. “It’s a way to bridge the campus to our community and help with density and that visitor experience.”

The small town of Jefferson is experiencing a renaissance through its partnership with Main Street Iowa and the robust support of its community. After grant funding and facade improvements to 13 dilapidated downtown buildings, the city stepped in to do even more through forgivable loans and matching funds, says Jamie Daubendiek, president of Jefferson Matters: A Main Street and Chamber Community.

“The downtown area reflects the rest of the community with its energy and beautification efforts,” Daubendiek says. “All of these spaces have drawn events and gatherings, big and small, to downtown. The focus of the improvement projects is to benefit all current residents, attract newcomers and enhance the experience for our visitors.”

People are taking notice of the banners on city lamp posts, flowers dotting the downtown streets, and sculptures on the plaza. The small community of Jefferson is making a big statement for historic preservation and beautification efforts across the state.

“For a rural community of 4,300 residents, Jefferson has become an example of what can happen through awareness of historic reservation techniques and creating ways for properties to make improvements,” Daubendiek says. “Partnerships are the key to success.”