8 Cool Things to Do in Iowa

Tour the Capitol Building, ride The Monster, and much more. 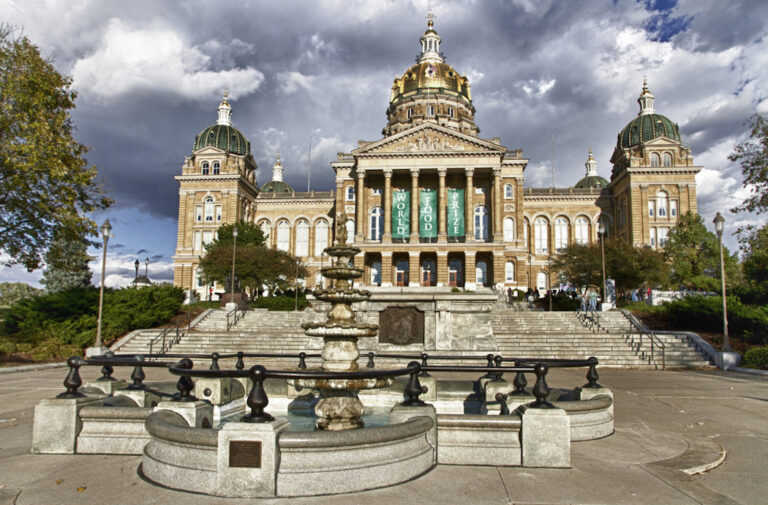 Iowa / Courtesy of Jason Mrachina under a CC 4.0 license.

Among the safest states in America is Iowa, which enjoys four distinct seasons, a diverse economy and an excellent university system. There are also many things for residents and visitors to do in The Hawkeye State, such as:

Gold? Yes, see the 23-karat golden dome along with the governor’s offices, legislature wings and Supreme Court chambers during a free guided tour of the Iowa Capitol Building in Des Moines. Also worth seeing is an impressive grand staircase, flags carried by Iowa regiments in various wars, and porcelain dolls representing the 41 Iowa First Ladies.

Pack up the kids and drive to Dubuque to visit the National Mississippi River Museum & Aquarium, where wildlife from the Mississippi River and Gulf of Mexico are showcased. This Smithsonian Institution facility attracts 250,000 visitors a year who can get close to giant catfish, frogs, turtles, rays, octopi and river otters.

Travel to West Branch and tour the Herbert Hoover National Historic Site, which preserves the 31st President’s birthplace as well as a one-room schoolhouse, a Quaker meetinghouse and Hoover’s grave. Also available is the Herbert Hoover Presidential Library & Museum that contains hundreds of artifacts pertaining to the President and his wife, Lou Henry Hoover.

Gather your courage and ride some of the most exciting roller coasters in America during a trip to Adventureland Amusement Park & Adventure Bay Waterpark. The tourism destination in Altoona has more than 100 rides, including a recently opened “The Monster” that measures 13 stories high and includes a 133-foot vertical lift hill and five full loops.

Motor to the Iowa 80 Trucking Museum in Walcott where more than 100 vintage trucks are on display. The exhibit ranges from a 1910 Avery Farm Wagon to a 1983 Ford 9000, and the building also features 300 original gasoline signs and 24 vintage gas pumps. A restaurant is on site.

Explore Scandinavia within the United States in Decorah, a small town that has several Scandinavian-themed downtown stores and restaurants along with the Vesterheim Norwegian-American Museum. The museum offers more than 24,000 artifacts inside 16 historical buildings, and Decorah also celebrates Scandinavian heritage each summer during a Nordic Fest with parades, music and ethnic food.

Board the Boone & Scenic Valley Railroad that travels from Boone to the old coal-mining town of Fraser and back. Passengers ride in 1920s-era coach cars, and the train travels at a maximum speed of 12 mph. The beautiful and fun excursion ranks among the most popular attractions in Iowa each year.