A roundup of good places to eat in Marion 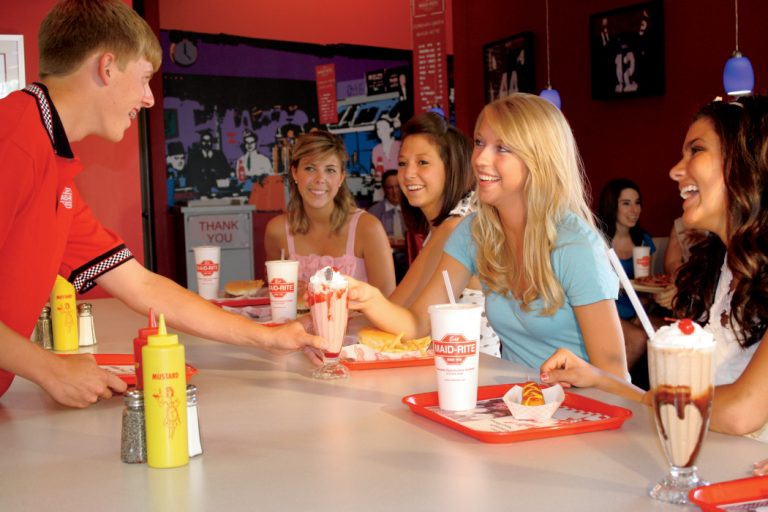 There’s no reason to go hungry in Marion, where you can satisfy a craving for cookies, coffee, loose meat (more on that later) or Mexican food in a haunted house. Here are a few restaurants that locals recommend:

Zoey’s Pizzeria is known for superb Chicago-style, thick-crust pizzas, which bear names like the Zoey and the Z-Taco-ey (yes, a taco pizza), and equally special thin-crust pizzas. Zoey’s is also the home of the Zookie. The what? Imagine a warm 9-inch chocolate cookie, topped off with ice cream and whipped cream. Just the thing to follow up that pie.

Marion, IA’s Recreational Offerings Provide Something for Everybody

Another Road Brewing opened its new taproom on Ninth Street in July 2016, where it continues to draw beer-lovers with intriguing brews that might include such unique blends as Jasmine’s Apricot Pharmhouse or Imperial Smoked Habanero Stout. There’s food, too – stay tuned for what the new kitchen will offer.

Find yourself in the heart of the ‘50s when you sit down to fill up at Marion Maid-Rite. A local favorite for decades, the bustling eatery serves an expansive menu of sandwiches, fries of all descriptions, soups and salads. The best-loved specialty would have to be Maid-Rite’s famous loose meat (seasoned ground beef) sandwich, declared by its first taster to be “made right.”

Wit’s End Coffeehouse is more than a place for coffee drinks, tea and homemade baked goods enjoyed by the fireplace or on its charming three-season porch. It’s where you’ll also find cool books, artwork and any number of artful and intriguing things you’ll want to take home with you.

Be afraid. Be very afraid. Okay, maybe not all that afraid, but keep in mind that the Marion location of Carlos O’Kelly’s is rumored to be haunted – in addition to serving some tasty Mexican food. As the story goes, a girl who fell to her death from a Ferris wheel, part of a carnival at the site of the restaurant many years ago, still wanders at night. Ghostly happenings on-site include falling dishes, flying glasses and strange apparitions – none of which have affected the food.