If you love the outdoors, a trip to Ketchum lets you choose your own adventure. 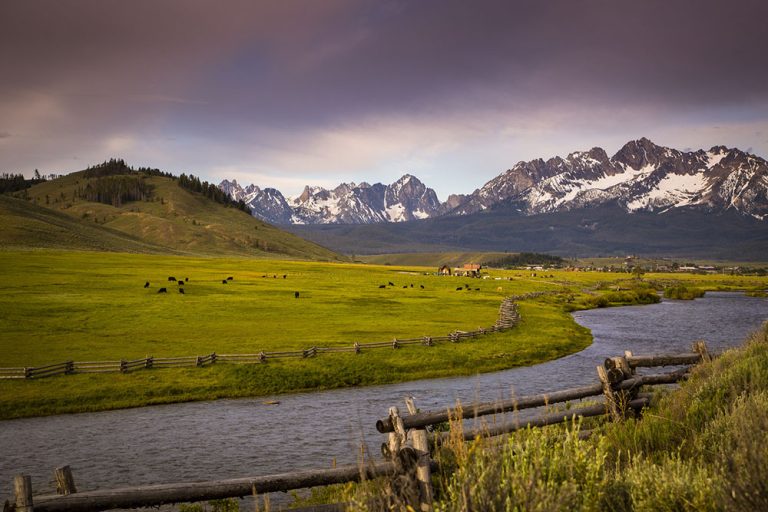 Welcome to Go There, a Livability.com series about travel and how to maximize your time in some of our favorite cities. Do you have a place in mind that we should visit next? Let us know! Today, we’re sharing our weekend getaway guide to Ketchum, ID.

There’s a feeling of excitement and fresh energy in Idaho’s Sun Valley region right now. Modern hotels, restaurants and bars are breathing new life into this region, long heralded for its luxury ski area. Soon, Ketchum will be full of skiers and snowboarders – many who have never been here before – thanks to Sun Valley Resort joining the popular Epic Pass this season. Work is also underway to add 380 new acres to the ski area’s terrain and install a new high-tech chairlift.

There’s never been a better time to visit Ketchum. Here’s our weekend getaway guide for making the most out of your trip to Central Idaho.

You’ll definitely want to book a room at the Limelight Hotel, located right on Ketchum’s walkable Main Street. The hotel, owned by Colorado-based Aspen Skiing Company, opened three years ago as the first new hotel in Ketchum in nearly 20 years.

The first thing you’ll notice when you walk through the Limelight’s front doors is the massive lounge, which has a bright, open design and comfy seating areas that give it a living room vibe. The rooms and suites are also light and airy, with contemporary furnishings and plenty of space to spread out and get comfortable.

The hotel goes above and beyond to make sure your stay in Ketchum is awesome. For starters, they’ll pick you up from the airport (which has direct flights from Denver, Salt Lake City, Los Angeles, San Francisco, Seattle and Chicago) in their complimentary shuttle, which is handy if you don’t plan on renting a car (and honestly you don’t really need one here).

To get around town, simply call the front desk and the shuttle will drop you off and pick you up. Rather drive? The Limelight has another nifty transportation-related amenity: a complimentary vehicle is available to all guests. The hotel also has complimentary cruiser and fat bikes for guests to use.

If you’re like me and you dread leaving your dog at home while you travel, you’ll be happy to know the Limelight and Ketchum itself are extremely dog-friendly – if you have dinner in the Limelight’s Lounge on a weekend, chances are you’ll spot at least half a dozen dogs curled up under the table at their owners’ feet.

The Lounge, which has several cozy fireplaces, is also a hip spot to catch live music or grab some happy hour or apres-ski drinks. Their fresh-baked pizzas are definitely the main attraction, but the small plates (like the fresh-cut Idaho truffle fries) are also great for sharing or snacking.

There are also two outdoor hot tubs and a heated pool here, which is the perfect way to spend a winter afternoon as snowflakes fall.

Even better? There aren’t as many people here as you might find in other adventure hubs, so you’ll have more of the wilderness to yourself. Ahhh, peace and quiet.

There are too many hiking and mountain biking trails to list here (it’s also a super popular spot for gravel riding, a special type of cycling on dirt roads), so we wanted to focus on some of the other outdoor recreation options in Ketchum instead.

If you’re into skiing or snowboarding, you’ll want to head to Sun Valley Resort. Not only will you find world-class terrain here, but you’ll also get to experience a huge part of skiing history. (If your interest is piqued, you can learn even more about the area’s ski legacy at the Regional History Museum in Ketchum.)

Opened in 1936, Sun Valley was America’s first destination ski resort. What does that mean exactly, you ask? Though skiers regularly flocked to the slopes in Europe for vacations in the early 1900s, there wasn’t anything quite like that in the United States. Inspired by this European trend, the savvy chairman for Union Pacific Railroad saw an opportunity to increase passenger traffic by building a luxury ski resort along one of the rail lines. He searched far and wide for the ideal mountain, eventually landing on the Sun Valley region. Fun fact: Sun Valley also operated the first three chair lifts in the world.

Thanks to a sophisticated advertising strategy, the glamorous resort attracted Hollywood stars and celebrities like Clark Gable, Marilyn Monroe, Ernest Hemingway and several members of the Kennedy family (you can see many of the celebs’ skiing snapshots on the wall of the Duchin Lounge). Just think: you’re basically skiing on the red carpet!

History aside, the resort offers more than 3,400 vertical feet and 2,000 acres of skiing and riding terrain for you to enjoy today. New to skiing? Head to Dollar Mountain, where you can learn at your own pace. There are also lots of cross-country skiing trails here, too.

If you’ve never been fly fishing but you’ve always wanted to try it, now is your chance. With the Big Wood River running right through town, you don’t have to trek far to do some epic fly fishing in Ketchum.

You will want to go out with an experienced guide if it’s your first time (or even if you’re super experienced). They know where the fish like to hang out, they know where to cross the river and they know the right kind of flies to use for every situation. A guide will also get you set up with a fishing license so you don’t accidentally end up fishing illegally! And don’t worry about waders and waterproof boots, as they can provide those, too.

During a recent visit to Ketchum, I went out with guide Amanda Bauman of Silver Creek Outfitters. Bauman is a total badass – she’s one of the only female guides around, and she also runs a catering business and teaches kindergarten. We spent about four hours on the Big Wood River together and Bauman expertly instructed me on everything I needed to know about fly fishing.

I can’t guarantee it, but you’re likely to catch a lot of fish here – rainbow trout, mountain whitefish, brown trout and brook trout, to name a few. Depending on the season and the fish, this is mostly a catch-and-release sport in Idaho (with a few exceptions).

How Women Are Shaking Up Idaho’s Outdoor Industry

If the two outdoor hot tubs at the Limelight aren’t enough for your aching muscles, you’ll be happy to know there are several hot springs to choose from here. Many of them are relatively undeveloped, too, so you’ll be able to soak up the surrounding nature … while you soak.

Be sure to stay up late enough to do a little stargazing, since Ketchum sits within the 1,416-square-mile Central Idaho Dark Sky Reserve. The Limelight even has a telescope on its main floor and also offers dark sky dinners in a backcountry yurt with an astrophysics professor.

If you ask a local where to have dinner, you’ll undoubtedly get a resounding answer: Rickshaw. It’s a cozy, Asian fusion restaurant with a fire pit out front and a ping pong table in the garden (there’s typically a waitlist).

For a completely Instagrammable experience, head to The Boho Lounge, a dreamy new restaurant that opened in Ketchum this spring. You’re welcome to take your shoes off at the door, then pick a seat at a conventional table or on cushions on the floor (owner Hannah McNees was inspired by a trip to Bali). There are classy and fun cocktails on the menu, (like the Rosemary Salty Dog, with vodka, rosemary syrup and fresh-squeezed grapefruit juice), as well as tons of innovative and creative entrees. If you’re vegan or vegetarian, The Boho Lounge has so many options you won’t know what to do with yourself.

The Pioneer Saloon is a Ketchum classic, with tons of rustic decor, including old Wild West photos, mounted game and pioneer-era firearms. The saloon is best known for its steaks, prime rib and other meats, but even if you don’t stay for dinner, grab a drink at the bar up front to soak in the ambiance.

In my opinion, you really get to know a new city when you hang out at the local brewery for a beer or two. And that sentiment holds true in Ketchum, where you’ll find 25 beers, wines and ciders on tap at Sawtooth Brewery. Folks are nice here and the beer is diverse and delicious.

Both Perry’s and The Kneadery are good lunch options, with an array of sandwiches, soups, salads and brunchy items on their menus. Also stop by Warfield Distillery and Brewery, which is in the middle of a 12,000-square-foot expansion project.

Millennials, Gen Xers Share What They Love About Twin Falls and Southern Idaho

Ketchum’s shopping is a funky mix of high-end luxury stores and hardcore outdoor outfitters. There are a handful of art galleries here, too.

Lost River Outfitters and Silver Creek Outfitters have an impressive selection of fly fishing gear and outdoorsy apparel (Silver Creek also carries upscale clothing, shoes and accessories). For your four-legged friends, be sure to stop by Thunderpaws Pet Shoppe, where you’re likely to see one or two adoptable kitties lounging in the sun near the window.

If you’re into thrifting, Ketchum has a great shop called The Gold Mine Thrift Store. Your purchases at the store support the Community Library and you’re sure to snag some awesome finds here (when I visited, I scored some gently used Lululemon apparel!). There’s also a charming antique shop called Antique Alley, which is filled to the brim with funky treasures.

The Trailing of the Sheep Festival, held every October, is the ultimate Sun Valley celebration. This quirky festival celebrates the region’s sheep ranching history, which dates back to the late 1860s. For many years, there were more sheep in Idaho than there were people!

The festival has a fun backstory, too. In the early 1990s, residents were getting fed up with sheep using a local 20-mile bike path on their way to winter grazing areas. The sheep were a bit, ahem, messy, leaving behind their droppings for bicyclists and hikers to find later. The Peaveys, a local family that owned the Flat Top Sheep Company, decided to introduce the community to the sheep and invited residents to “trailâ€ behind the sheep to keep the bike path clean.

7 Weirdly Specific Holiday Festivals Around the US

Since 1996, the festival has been a wildly popular annual event, attracting visitors from all over the world. The main event is a sheep parade down Main Street in Ketchum featuring some 1,500 sheep. But there are tons of other activities, ranging from sheepdog trials to cooking classes to wool crafting workshops.

Mountain Humane, the region’s animal shelter, just built a $16 million state-of-the-art facility funded by private donations. The 20 acres of land the new shelter sits on was also donated. Now that is some serious animal love.