5 Awesome Things That Surprised Me About Indianapolis

There’s so much more to Indianapolis than race cars and Ron Swanson’s favorite steakhouse. 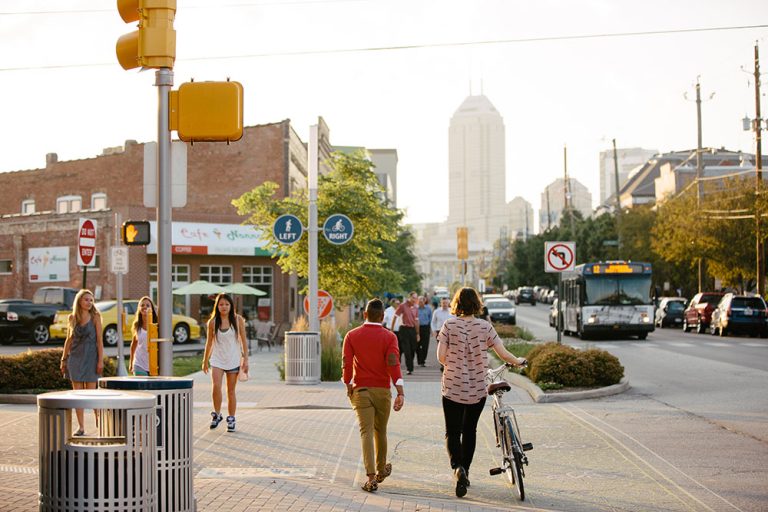 When you think about Indianapolis, what do you think of? Even though I’m a fellow Midwesterner, my knowledge of Indianapolis pretty much starts with “car racing” and ends with “occasionally featured in plot lines of the TV show ‘Parks And Rec.'”

But there’s so much more to Indianapolis than race cars and Ron Swanson’s favorite steakhouse! I recently visited Indianapolis and I was pleasantly surprised by what I found.

What would you and your family do with an extra $82,000? Work fewer hours? Take that trip you’ve been dreaming of? Accept the super fulfilling job with the lower salary? So many things are possible when your mortgage is more manageable. The cost of living in Indianapolis makes those things possible.

When you think “Water + Midwest,” are you thinking of Minnesota? Or the cities that border the great lakes? Me, too.

But the White River runs through the heart of Indianapolis and the city has made the most of it. You can kayak or pedal boat – right in the middle of the city! Or you can just admire the river from White River State Park, the country’s only urban state park.

Best Places to Live in Indiana

Indianapolis’ other surprising water feature? Canal Walk Indy. This three-mile canal has fountains, ducks and geese, sweet little cafes and even gondola rides! It’s the perfect spot for an afternoon walk or run. The canal is also lined with beautiful homes and condos. You can get a taste of what it’s like to live there by booking this gorgeous Airbnb that overlooks the canal. Just $95 a night? Yes, please.

The first time I spotted a beautiful, professionally-rendered mural in Indianapolis, I thought it was a lovely one-off. Then I turned the corner and spotted another one. And another.

According to the Indy Arts Guide, there are more than 260 murals or pieces of street art in Indianapolis. And that number is going up every week! The art ranges from inspiring quotes to Renaissance-style still-lifes to pieces honoring Black History.

4. The Many Farm-to-Table Restaurants and Farmers’ Markets

Farming is big business in Indiana – agriculture contributes $31.2 billion to Indiana’s economy. So I shouldn’t have been surprised by Indy’s obvious love of farmers’ markets and farm-to-table restaurants

In fact, Indianapolis has EIGHT farmers’ markets. The city’s original farmers’ market opened in 1886 and operates year round – moving inside November – April.

And the city boasts heaps of farm-to-table restaurants that showcase all that amazing produce. Traders Point Creamery, the state’s first organic dairy farm, has its own restaurant – in a barn! The menu features dishes like pan-roasted chicken breast with spring vegetable barigoule and wild onion pesto.

The aptly named Locally Grown Gardens has seasonal menus to celebrate produce at its most delicious. Customer favorites are the berry pies, sliced tomato plate and zucchini bread.

If you care about college or professional sports I’m sure you’re rolling your eyes right now. But I entered the city limits of Indianapolis knowing less-than-nothing about the local sports scene.

When you spend more than 10 minutes in Indianapolis, you’ll be schooled on the importance of Larry Bird, Reggie Miller and Bobby Knight. You’ll hear all about Peyton Manning and Marvin Harrison. You’ll see racing references everywhere in honor of the Indy 500.

Even if you’re not a huge sports fan, being around people who are excited to support world-famous teams and athletes is just dang fun. Even if you – like me – can’t tell the difference between a tight end and linebacker, it’s fun to buy a seat in the nosebleeds, order one of those giant stadium pretzels and soak up the enthusiasm. Indy offers plenty of options for sports fans both casual and diehard.