5 Cool Cities in Kansas Where the Arts Are Thriving

Looking for cool towns and cities where the arts are thriving? Take your pick from these creative havens in Kansas. 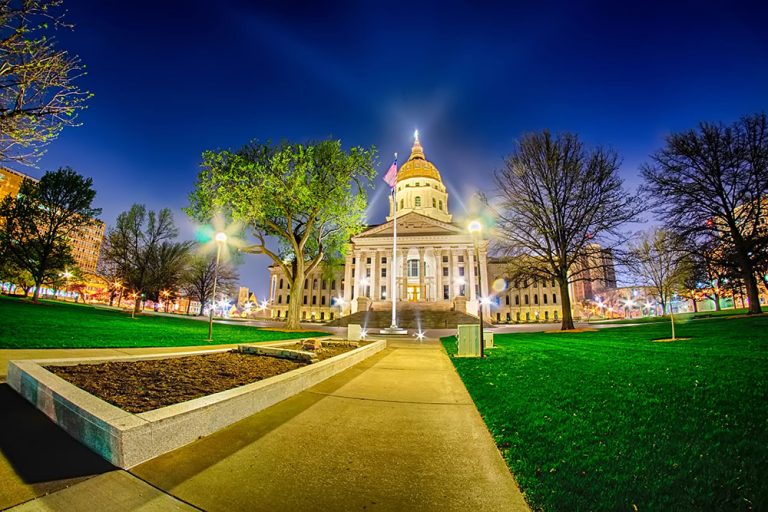 When it comes to awesome creative scenes, cities like Portland, Miami and L.A. tend to get most of the credit, but anyone living in the middle section of the U.S. knows that imagination and inspiration isn’t limited to the coasts.

Take the state of Kansas, for example, where there are not only plenty of places to appreciate fine art and great music, but also a bounty of artistic works that reflect the state’s proud abolitionist past, strong Native American traditions and culture of quirky creativity and individualism. Whether you are driving through the Sunflower State as part of a cross-country road trip, visiting family and friends, or looking to relocate, here are five Kansas towns that work hard to foster the arts and the creative spirits of the people living there.

If you’ve ever sat down with a glue gun and an eclectic array of random objects with the intention of creating something awesome, you need to visit Lucas. Located halfway between Kansas City and Denver, this small town of around 400 people celebrates creativity and ingenuity by showcasing grassroots art made by self-taught artists.

The Lucas Grassroots Arts Center, located on the town’s main drag, gives visitors a good overview of what grassroots art is, and includes a short tour of the gallery’s collection of work by midwestern grassroots artists. A motorcycle made of soda can pull tabs, a sculpture created with objects found at the bottom of a lake, and a covered wagon carved from limestone are just a few examples of what’s on display. The $8 tour includes a walk over to the nearby Florence Deeble Rock Garden, where the site’s home has been transformed into an installation by artist Mri-Pilar called Garden of Isis, which features re-fashioned Barbies, baby dolls and mannequins.

Best Places to Live in Kansas

The “Garden of Eden,â€ the attraction that originally put Lucas on the map, consists of a historic home and a funky concrete sculpture garden, both built by a fellow named S.P. Dinsmoor. A civil war veteran, Populist politician and retired school teacher, Dinsmoor came to Lucas in 1904 at the age of 64 and worked on the home and the 150 concrete figures in the Garden of Eden until he died at 89. The themes of Dinsmoor’s sculptures include an unlikely combination of religious scenes and populist political statements. The informative $8 tour of the site culminates with the opportunity to step into Dinsmoor’s crypt to peep at his mummified corpse.

An artistic tour of Lucas is not complete without a pit stop at the Bowl Plaza Public Restroom (yes, you read that right). Decorated with mosaics inside and out, this toilet-shaped structure has been voted as the second best restroom in the U.S.

This college town in eastern Kansas, which was once home to the late Beat generation writer William S. Burroughs, is brimming with creativity and has an art scene to match (it’s no wonder it was named one of Livability’s Top 100 Best Places to Live). The best way to see what local artists are doing in Lawrence is attending the monthly Final Friday events that feature artwork and entertainment throughout the historic downtown and the neighboring East Lawrence arts district. The downtown Lawrence Art Center is the city’s hub for both visual and performing arts classes as well as community theater and art exhibitions.

Lawrence also has a great music scene, with both national and local acts performing regularly at the Bottleneck, historic Liberty Hall and the movie-theater-turned-music-venue Granada. The Jazzhaus, an upstairs candle-lit bar overlooking downtown, and the Replay Lounge, a rock-n-roll pinball bar, are also beloved local venues. On Wednesday evenings in the summer, the Lawrence City Band plays concerts in the historic gazebo in Lawrence’s picturesque South Park, which also hosts the Kansas State Fiddling and Picking Championships every August, as well as the Art in the Park art fair every May.

Want more? Get your museum fix at The Spencer Museum of Art on the University of Kansas campus, which has a respectable collection covering ancient to contemporary art.

Situated just a few miles south of I-70 in central Kansas, the small town of Lindsborg is sometime called “Little Sweden USA,â€ but in addition to its Swedish heritage, Lindsborg is known for its thriving arts community of more than 60 working artists as well as its collection of working studios and galleries.

Lindsborg has two museum dedicated to the work of well-established artist who made home their homes there. The Birger SandzÃ©n Memorial Gallery is named in honor of the Swedish-born painter and print maker who came to Lindsborg in 1894 to teach language and arts at Bethany College. The gallery houses a large collection of SandzÃ©n’s work and works of hundreds of other artists. The Red Barn Studio Museum was the studio of the prolific painter and craftsman Lester Raymer, who often used recycled materials in both his art, and drew heavily from Spanish and Mexican folk art traditions.

Each year during Holy Week, Lindsborg’s Bethany College hosts the Messiah Festival of the Arts, which features the Bethany Oratorio Society’s performances of Bach’s “Passion According to St. Matthewâ€ on Good Friday, and Handel’s “Messiahâ€ on Easter Sunday.

Coronado Heights, a 300-foot hill just outside of Lindsborg, boasts the dubious claim of being the place where Spanish explorer Coronado gave up his ill-fated quest to find the fabled Seven Cities of Gold.  But the funky stone castle built by the Works Progress Administration (WPA) in 1932 at the top of Coronado Heights is the perfect place to take in a sunset and view of the sweeping Kansas plains.

As the largest city in Kansas, it’s no surprise that Wichita delivers in the arts category. With a massive Chihuly chandelier as its lobby centerpiece, the Wichita Art Museum is known for its extensive glass collection as well as its collection of art of the American West, which includes 20 works by Charles Russell. The Ulrich Museum of Art at Wichita State University specializes in modern and contemporary art and has a lovely outdoor sculpture garden.

Wichita’s landmark Keeper of the Plains, a 44-foot steel sculpture designed by Native American artist Blackbear Bosin, rises majestically above the confluence of the Big and Little Arkansas rivers. While it’s an impressive piece any time of the day, it is best viewed in the evening, when the statue is illuminated for 15 minutes by a ring of fire created by a collection of fire pots at the base of the sculpture. The nearby Mid-America All-Indian Center features nearly several other pieces of Blackbear Bosin’s artwork and a variety of other American Indian craftwork.

The capital of Kansas has been fostering a growing art scene in recent years with a monthly First Friday Art Walk in the burgeoning North Topeka Arts District, but it’s only fitting that some of Topeka’s most iconic art is painted right on the walls of the capitol building. Kansas is proud of its history as a free state and John Steuart Curry’s famous capitol mural “Tragic Preludeâ€ is a dramatic reminder of the state’s fiery anti-slavery movement. Topeka’s Brown v. Board of Education National Historic Site memorializing the 1954 decision to strike down racial segregation in public schools is another point of pride for Kansas. In 2018, the Topeka community, under the direction of Michael Toomis, completed a colorful community mural exploring themes of justice, which sits directly across from the site.

The collection at the Mulvane Art Museum on Washburn University’s campus focuses on American art of the 20th century, and the museum’s free, family-friendly ArtLab give kids a chance to explore their creativity through activities involving painting, printmaking, pencils and Legos.