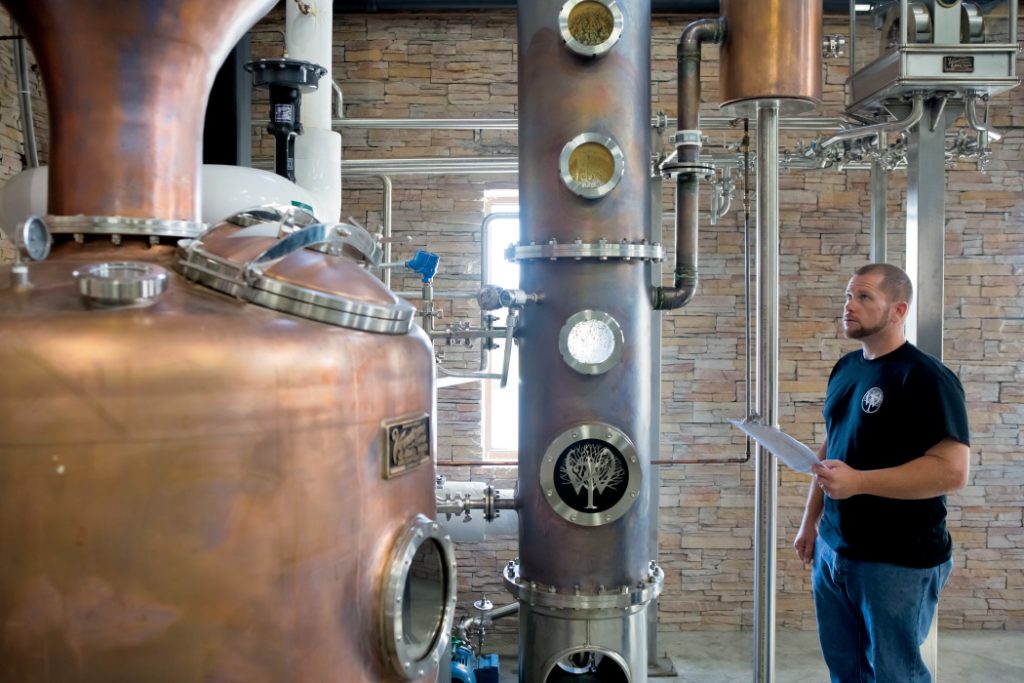 Danville and Boyle County proudly continue the long tradition of spirits production that has been a vital part of the state’s history since colonial times. For example, Boyle County resident Zachary Baeker and his family and in-laws produce a Brazilian rum called Espirito XVI Cachaça that is available in six states, and their Ambrabev company also makes a cane-juice-based Boteco Vodka.

Also in Boyle County is Jane Barleycorn’s Market & Bar, which doesn’t produce spirits but offers regular classes on wine and spirits tasting at its Danville location. Also in Danville, Wilderness Trail Distillery, which formed in 2012, has already expanded into its current location on the 21-acre historic 1859 Willis Grimes property on the rural edge of the city.

“From here in Danville, we are already producing and have launched a Blue Heron Vodka that is available in 20 states, and we make a Harvest Rum that is sold in Kentucky, Michigan, Pennsylvania and Nevada,” says Shane Baker, who with business partner Patrick Heist is co-owner of Wilderness Trail Distillery. “We have also released a Settler’s Select Rye Whiskey, but as for our Wilderness Trail Bourbon, we want all of our bourbon to fully mature at least five years before it goes on sale to the public. That’s why our bourbon’s launch date isn’t until December 2017.”

Baker and Heist first became business partners in 2005 when they started a company called Ferm Solutions, located behind Centre College. The two entrepreneurs have engineering, microbiology and marketing backgrounds from the University of Kentucky, and they put their collective knowledge together to make Ferm Solutions a highly regarded consultant and problem-solving firm that advises 150-200 spirits-based companies throughout the United States and beyond.

“We work with hundreds of distilleries each year, providing technical advice, startup suggestions, engineering information, expansion recommendations and more – we are considered at the top of the game in the distillery industry,” Baker says. “Because of confidentiality agreements, I can’t divulge what distilleries we’ve helped over the years, but if you walk down an aisle in any liquor store, just about every other step you take will feature a bottle from a customer of ours.”

Discover the Top 10 Fun Things to Do in Danville, KY

Ferm Solutions is a vibrant business with 15 full-time employees, now relocated to the Willis Grimes property. Meanwhile, Baker’s and Heist’s love of distillery science and marketing led them to begin their second enterprise – their own Wilderness Trail Distillery.

“We can currently distill about 1,400 barrels a year, and once we begin our bourbon sales, bottles of Wilderness Trail Bourbon will only be available for sale in Kentucky for a while,” Baker says. “Then we will slowly go regional and maybe then national. We are not interested in making a lot of product, just the best-tasting product that can be made.”

Baker adds that Wilderness Trail uses corn and wheat purchased from Caverndale Farms, three miles away in Boyle County, and the company’s Harvest Rum is made with Kentucky sorghum instead of imported molasses. Wilderness Trail Distillery is one of 10 sites on the increasingly popular Kentucky Bourbon Trail Craft Tour.

“We began offering tours in 2013 and had 500 visitors that year, and that number rose to more than 7,000 tours in 2016,” Baker says. “We have a beautiful visitor’s center and a tasting room onsite, and our tours provide people with a look at the science we use along with the ambiance. They learn that we even use the temperatures and winds from the knobs area of Boyle County to our advantage in the aging of our bourbon.”