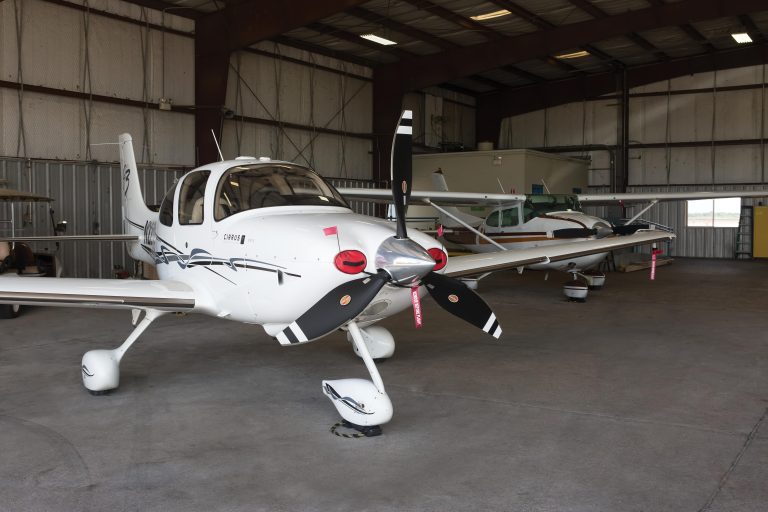 At Lake Charles Regional Airport, about 140,000 passengers are served annually with daily United Express flights to Houston and American Eagle flights to Dallas-Fort Worth.

“We have a 6,500-foot concrete runway that is the same size as Chicago Midway, so we can handle planes up to 737s,” says Heath Allen, Lake Charles Regional Airport executive director.

Discover the Booming Business Climate that is Southwest Louisiana

The airport accounts for 1,600 direct and indirect jobs in the region and delivers about $225 million annually in economic activity. In 2017, Lake Charles Regional upgraded its entire LED lighting system, replaced all perimeter fencing and opened a rental car maintenance facility.

The airport also includes a 580-acre industrial park that now houses 32 business tenants, including helicopter operators ERA Helicopters and PHI, which serve oil and gas industries in the Gulf of Mexico.

Chennault International Airport, a former Air Force base in Lake Charles that is now an industrial airport, provides a $300 million  economic impact.

With more than 1.5 million square feet of space within Foreign Trade Zone 87, Chennault International features rail service that offers a direct link to and from the Port of Lake Charles. For distribution companies, the airport is also less than a mile from Interstate 10 and the I-210 bypass.

Chennault serves as a home base for companies involved in industry sectors such as distribution and logistics, manufacturing, new technology, service industries and transportation. Its tenants include Northrop Grumman, Million Air, Landlocked Aviation Services and Louisiana Millwork.

The convenience of having an industrial airport provides manufacturers in the five-parish region with “just in time” air cargo service. More than 1,500 people draw paychecks at Chennault. Airport officials are also exploring an inland port  and have hired an engineering consultant to determine the development potential.

A third airport contributing to the economy of Southwest Louisiana is Beauregard Parish Airport (BPA). Officials there expect the airport to contribute even more in the foreseeable future now that 1,100 acres of onsite property has been achieved with Louisiana Economic Development site certification, the second-largest in the state with the designation.

The Beauregard Airport property also joins the region’s other smaller certified sites, including two at Chennault Airpark and one at Industrial Park East owned by the Port of Lake Charles.

“Our new industrial mega-site is like the start of a new era in Beauregard Parish,” says Avon Knowlton, director of economic development for the City of Deridder and Beauregard Parish. “The property was certified in December 2016 and we already showed it about 12 times to corporate prospects during the first half of 2017. We know it is only a matter of time before we have our first company move in.”

The airport offers a 5,495-foot runway and access to rail. U.S. 171 and 190 are within five minutes of the site. The property is close to the Fort Polk Army Base, the state’s largest employer.

“The mega-site would be ideal for defense and aerospace contractors to locate,” Knowlton says.

BPA currently houses business jets as well as charter aircraft, and the airport has a financial impact of about $2 million a year.

“There are many projects being announced throughout the region these days, and we want to be in the discussion for future deals,” Knowlton says. “This mega-site will play a big part in the future of Beauregard Parish.”