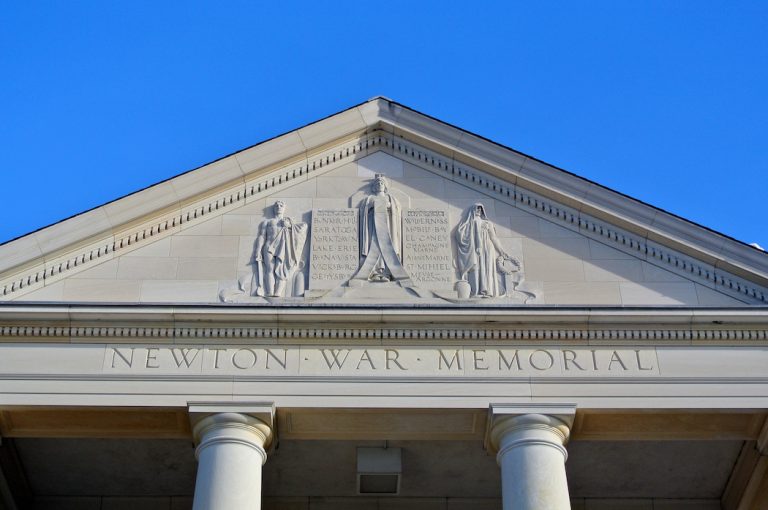 Newton / Courtesy of Lorianne DiSabato under a CC 4.0 license.

The city of Newton is the namesake for the Fig Newton cookie, and Newton is also home to the challenging Heartbreak Hill section of the Boston Marathon. This community settled in 1630 and now offers an upscale quality of life, historic homes, top schools and unique neighborhoods, and Livability.com ranks Newton among the 100 Best Places to Live for 2016. The local economy remains robust, and here are eight major employers:

Taking care of Boston College students is the goal of Boston College Health Services, whether a student has a health emergency, a concern about nutrition, or a bad case of flu. The health services campus center is open 24 hours a day and works closely with nearby Newton-Wellesley Hospital.

The nonprofit organization has an agency in Newton dedicated to helping provide a better future for vulnerable children in Zambia, Africa. The model of Communities Without Borders pairs needy communities in Zambia with more affluent communities in the U.S. in order to build trust and friendship between the two communities, thereby increasing opportunities for the Zambian children.

The staff at Newton-Wellesley Hospital oversees about 4,500 births and 56,000 emergency room visits each year, and the 265-bed medical center with 1,000 physicians provides services like surgery, obstetrics, orthopedics and psychiatric care. Newton-Wellesley is also the teaching hospital for Harvard Medical School as well as Tufts University School of Medicine.

A destination for Jewish engagement for social, cultural and fitness activities is the Jewish Community Center of Greater Boston, which has amenities like meeting rooms, tennis courts, a weight room, indoor track and basketball courts. Also on site are a year-round indoor swimming pool and a summertime outdoor pool.

Wegmans Food Markets has a store on Route 9 in Chestnut Hill (a village of Newton), and the supermarket features departments like a full deli, pharmacy and bakery. Wegmans is an 83-store chain with stores in Massachusetts and five other states, and the family-owned company celebrated its 100th anniversary in 2016.

Savings plans for families who want their children to eventually attend college is the mission at Ascensus College Savings, and today the company is helping more than 6 million Americans prepare for the future. Ascensus, with 30 years of experience, also offers customized programs to help U.S. citizens get ready for retirement.

Specializing in treatments for patients who deal with substance abuse issues, Bournewood Hospital in Chestnut Hill offers services such as methadone detoxification, a halfway house, opioid treatment and inpatient rooms. The medical center treats about 10,000 people a year and also features programs that help patients wean from prescription drugs.