Eat Your Way Around Quincy, MA 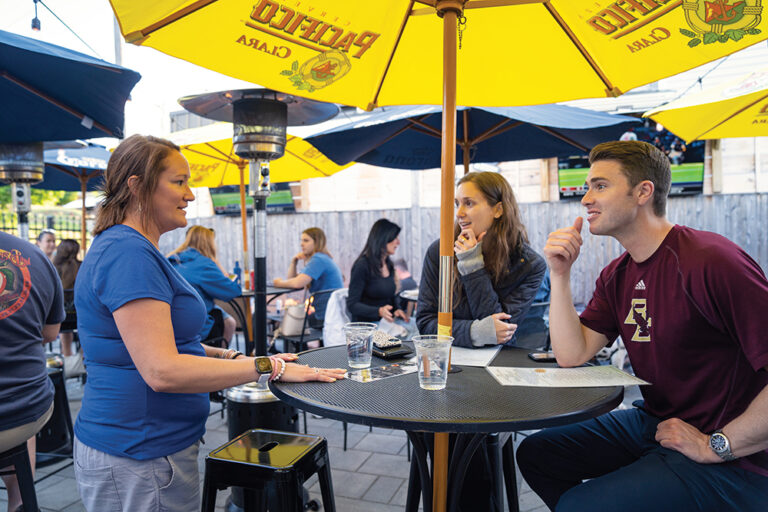 Far more than a Boston bedroom community, Quincy is a vibrant and diverse community made up of can’t-miss restaurants, bars and entertainment venues.

From fresh, locally sourced seafood to ethnic specialties, Quincy’s restaurant scene thrives on diversity. Burke’s Seafood serves fresh fish, shellfish and lobster daily in its restaurant and on-site market. Tony’s Clam Shop, a family favorite for over 50 years, offers a tasty menu of fish, shellfish and even Middle Eastern specialties from the Kandalaft family. For fine dining, ALBA Restaurant is the place to be, especially on summer evenings when the rooftop deck is open to diners.

Every day is Taco Tuesday at Pearl & Lime, a popular bar and restaurant. A delicious assortment of tacos and empanadas and an easy-going vibe keep locals coming back.

Pho So 1 is one of Quincy’s newest additions and the third-such restaurant for owner Tuan Nguyen, a first-generation Vietnamese immigrant. Nguyen serves up recipes she learned from her mother, including traditional pho dishes.

“There’s no better place to build a business than your home.”

Co-founded by another immigrant, Jimmy Liang, Fuji at WoC features sushi and creative Japanese fare. Liang immigrated from China as a young boy and moved to Quincy in the third grade. He started working in restaurants at age 14. By age 18, he was a head chef at the Apollo sushi restaurant in Boston. Then at 19, he opened his first restaurant, Fuji, in Quincy, with his best friend, Peter Tse. Today, the pair own and operate nine Pan-Asian restaurants in the region through the Fuji Group, including Fuji at WoC, Shabu, YoCha and B Cafe in Quincy.

“When I wanted to open my first Japanese restaurant, there weren’t any in Quincy. I thought to myself, why be in Boston and pay the high rent and have to fight everybody for market share when I can be in my own backyard where I grew up, where people know me and, at the same time, introduce a new cuisine to the city,” Liang says. “So after working in Boston, I came home and decided to build my business in Quincy because it’s my home. There’s no better place to build a business than your home.”

“We have a ton of different types of cuisines in Quincy. At one point, I believe the city of Quincy boasted more than 80 different cuisines —Italian, Irish, Filipino. The dining scene in Quincy is huge. It’s exciting,” he says.

Quincy boasts a burgeoning craft beer and cocktail scene. For example, at The Pour Yard, the drinks are the star of the menu. Its outdoor

dining and drinking space features an herb garden which shows up in the specialty cocktails) and famed igloos that keep the libations flowing during the Massachusetts winters. The Pour Yard serves more than 20 types of beers, including from local brewer Widowmaker Brewing.

Started “Quincy is full of people who are looking to support local — whether it be restaurants, businesses or art.” – Ryan Lavery, Widowmaker Brewingby a group of friends and beer enthusiasts, Widowmaker operates the Kilroy Square Beer Garden, a seasonal beer garden in Quincy’s city center, in the evenings, Thursday through Saturday. Widowmaker began as a homebrew project in owner and co-founder Ryan Lavery’s basement.

“Quincy is full of people who are looking to support local — whether it be restaurants, businesses or art.”

“You have people like Devin Adams, who owns The Townshend, and Palmer Matthews, who owns Pearl & Lime and has honestly mastered the art of mixology. Then you have Assembly, which is one of the better craft beer bars in Massachusetts,” he says.

Growing up on the South Shore, Lavery says Quincy was the regional epicenter, so it made perfect sense to open a beer garden here.

“Quincy is full of people who are looking to support local — whether it be restaurants, businesses or art,” he says. “There are obviously a lot of people who commute to Boston for work, but when they get home, they want something to do locally. So, opening the beer garden in Quincy was an easy decision for us.”

Whether catching a New England Free Jacks rugby game at the new home stadium, Quincy’s Veterans Memorial Stadium, or checking out the local acts at PorchFest Quincy, the annual summer music festival, there is always something to do.

“Laid back but always a good time” is how musician Emily Allyn describes the city’s music, arts and entertainment scene.

Allyn, a regular performer at PorchFest and The Pour Yard, says live music is a significant part of Quincy’s culture. Music is everywhere, from small venues to big stadiums to local bands to national artists, including the Quincy Symphony Orchestra. Or when it’s not game day, Veterans Memorial Stadium has been known to host music festivals too.

“Quincy is great for musicians because there are just so many places to play,” she says. “The Pour Yard might be my favorite place to play – the owners and staff are so great, and the atmosphere is so comfortable and fun — but I also like Paddy Barry’s and Off the Hook. Plus, there is an amazing community of musicians in the area, all who are incredibly supportive of one another.”