New development projects around downtown bring together the old and new. 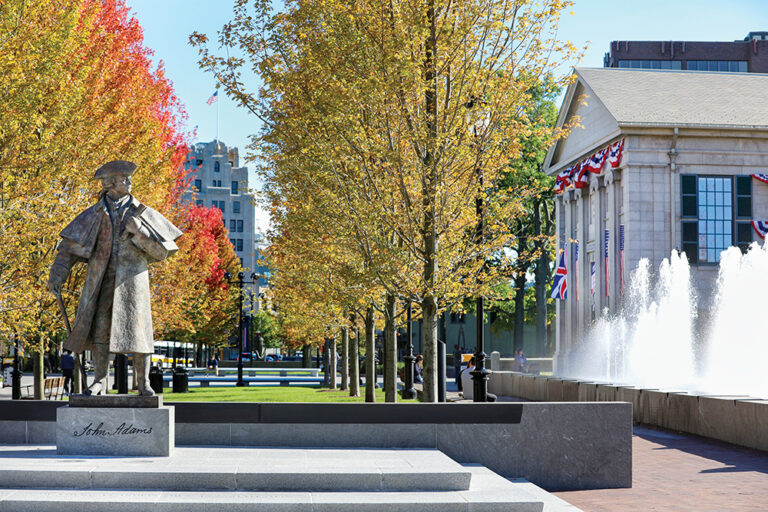 In downtown Quincy, it’s not unusual for a historical landmark to neighbor a growing office building or a trendy new restaurant. That’s the city’s charm — it’s steeped in history yet forward-thinking.

Less than a mile from Adams National Historical Park, significant downtown developments are in progress, including green spaces, residential and commercial properties, and infrastructure.

“When I ran for mayor, everyone told me I had to do something about the downtown. Downtown Quincy was shoppers-town USA from the 1940s to the 1970s. The advent of the mall became the decline of downtown like it did for so many other communities,” says Quincy Mayor Thomas Koch. “Since I’ve been elected, we’ve made investments across the city, not just downtown. Older cities like Quincy can’t remain stagnant — you either grow or go in the other direction. Overall, I think it’s been a tremendous improvement. We are proud of the work we’ve done as a team.”

“The combination of having available land, support of local leadership and the proximity to Boston and transportation sold us on Quincy,” says Margarita Kvacheva, CEO of LBC Boston. “We feel at home. Everyone has been very much on board in helping us succeed here. They showed us the ropes and introduced us to key members.”

“We feel at home. Everyone has been very much on board in helping us succeed here. They showed us the ropes and introduced us to key members.”

Known for its historical roots, Quincy hasn’t lost sight of its heritage despite its development.

“The historical aspects have positively affected our projects,” says Kvacheva. “It makes it feel like a neighborhood and as if the new buildings have always belonged here.”

Having grown up in Quincy, Kerri Lynch-Delaney, owner of 16 Restaurant, says even though a whole lot has changed, it still offers the same “towny” feel.

“It’s nice to see a change. Growing up in Quincy, there was tons of stuff to do here. But as I got older, everything left. The mayor has started to turn things around. It’s nice to see restaurants everywhere and people coming downtown,” says Lynch-Delaney. “We’ve been at the 16C Restaurant for six years. There’s a lot to be said that I’ve been here for six years, and now I’ve bought and am planning to open Kilroy’s on the Square (originally Tully’s). Everything the city is doing is great, and it will get better from here.”

And new developments, including infrastructure, are in the works throughout the city.

Along with mixed-used development, a three-level performing arts center is being developed in the Quincy Center to highlight the city’s robust art scene and attract residents and visitors downtown. Only a 10-minute walk away, Ashlar Park will be a modern apartment community with abundant open space and spectacular amenities spread across 15 acres, and it’s set to begin leasing in 2023.

The Massachusetts Bay Transportation Authority (MBTA) is leading the way in future-thinking infrastructure. In spring 2022, MBTA broke ground on a new bus maintenance facility, accommodating up to 120 battery-electric vehicles. The North Quincy MBTA Station was also recently transformed into new apartments, retail space and a parking lot for commuters. The Abby, for example, is a luxury apartment building that opened in 2021 and is inspired by the iconic Abigail Adams.

“Quincy has everything you can ask for — great public transportation, clean parks; it’s safe and walkable,” Kvacheva says. “We love Quincy and are looking forward to bringing more projects in front of the planning board within the next 12 months.”