From joyous art installations to world-class museums to underground galleries, Detroit is buzzing with creative energy. 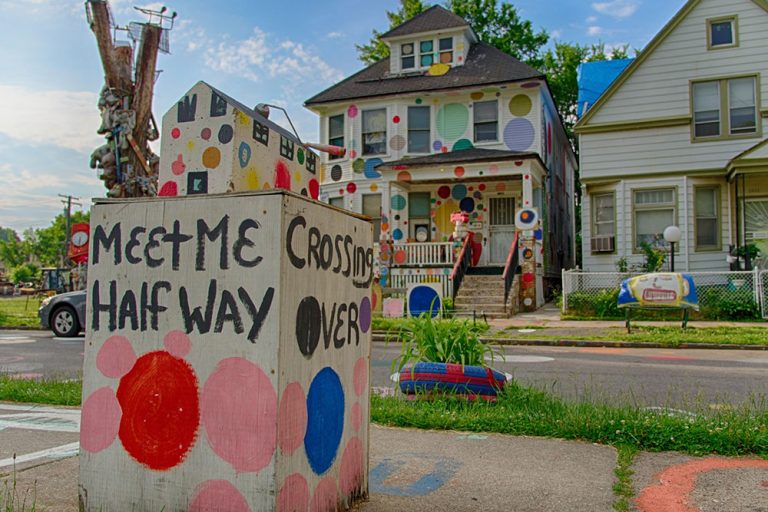 Detroit / Courtesy of Mike Boening Photography under a CC 2.0 license.

After all the city has been through, “creative” isn’t always the first descriptor that comes to mind when you hear the word “Detroit” – but maybe it should be.

With dozens of galleries, an influx of innovators and a rich history of public art, Detroit is a fantastic place for millennials (or anyone, really) who are looking to build a life of creativity. Here’s why Detroit’s arts scene is worth watching – and perhaps joining…

1. The public art is world-famous.

Detroit’s most well-known public art piece is probably the Heidelberg Project, a world-famous project that transformed urban blight into a space of creativity and hope. This found-art wonderland was created in the 1980s by artist Tyree Guyton, who returned to the Detroit street he grew up on and was devastated to find a decaying neighborhood. He enlisted the help of his grandfather and local kids to paint abandoned homes, create sculptures out of discarded objects, and revitalize their neighborhood through the power of art.

That ethos – creating something beautiful out of whatever resources are available – defines much of Detroit’s public art scene. Take, for example, The Belt, a “culturally redefined alley” in the center of the city. The project transformed an abandoned stretch of the city into a vibrant public space full of murals and installations.

Another legendary piece, the MBAD African Bead Museum by Olayami Dabls, stretches across nearly an entire city block. The space was created to celebrate African heritage and features a bead gallery along with eighteen outdoor art installations, murals and mosaics.

Of course, art is also woven into the fabric of Detroit’s everyday infrastructure. The Detroit People Mover, the transit system encircling the city center, displays notable pieces of art in each of its stations. You can hop on and off the train to view Detroit-inspired creations like statues, tile mosaics and murals – gallery-quality pieces available to all for a People Mover fare of 75 cents.

Detroit honors its creatives each year with Detroit Art Week, a self-guided tour of the city’s art and culture. Open studios, galleries, museums and artist talks are all available for soaking in the culture. The scene is so renowned that art fans flock to Detroit from around the country to experience it.

Detroit’s galleries offer a little bit of everything. There are stunning commercial galleries like Simone deSousa Gallery, created by an artist who wishes she’d had something like it to show her early work in, and Playground Detroit, a gallery that doubles as a creative talent agency whose cofounder cut her teeth in the New York art world. Additionally, nonprofits like Detroit Artists Market, which is dedicated to nurturing local artists and displaying contemporary work.

There are even major corporations involved in the scene: In 2018, Red Bull Arts opened a “noncommercial arts program” in Detroit offering residencies, fellowships, grants and experimental exhibition spaces.

The bottom line? No matter what type of art or artistic community you’re into, there’s a gallery for you here.

4. Even the food is creative.

Detroit’s food scene is an art in and of itself. Anthony Bourdain, after eating his way through Detroit, called the city “magnificent.”

Eastern Market, one of Detroit’s most famous food hubs and one of the country’s oldest year-round public markets, attracts innovative food artists from around the U.S. Candy Bar, a speakeasy-like bar in Detroit’s newly opened Siren Hotel, offers customized cocktail recipes amid plush pink velvet walls, a disco ball, and a blown glass chandelier. When you eat in Detroit, the creativity extends from your plate to the wall decor all the way to the design of the furniture you’re sitting on. It’s a delicious and beautiful experience.

5. The architecture is incredible.

Even during Detroit’s lowest points, its beautiful architecture stood as a proud reminder of its strength. Detroit is designated as a UNESCO City of Design, and the city even has its own annual design festival. Detroit is famous for its breathtaking Art Deco buildings, which shine like retro beacons among downtown’s more modern skyscrapers. Beloved city treasures like the Fisher Building and the Guardian Building (seriously, you need to see the ceilings in there) are just the tip of the iceberg. The skyline is a sight to behold.

6. Innovative spaces blend art and immersive activities all over the city.

Detroit is a land of multi-hyphenate venues, and this is especially true when it comes to art. Cozy establishments like the Cass Cafe, a family-operated restaurant that’s been around since 1993, long before Detroit’s current revival, offers up food, drinks and a rotating gallery of cutting-edge works. (Their slogan, perhaps unsurprisingly, is “no TVs, just art.”)

There’s also the stately Scarab Club, a space that’s been around since 1907 to celebrate art in all its forms, from music to poetry to visual creations. Fans of art gather there for readings and discussions. Additionally, the club’s renowned costumed balls have been the stuff of legend for decades.

Of course, Detroit also has room for spaces that push boundaries, so you’ll also find quirky establishments like Popps Emporium. The space includes a gallery, communal hang-out space, tool library, and even a space for bartering among friends and neighbors.

7. There are rogue DIY art spaces for every interest.

If you’re looking to try something new or different creatively, Detroit has the community to make it happen. Here, you’ll find all kinds of art venues thriving in the most unique of circumstances.

Case in point: 1XRun, a space devoted to “creative populism” that creates and sells limited-edition online art prints in small batches. Another innovative space, What Pipeline, exists to support and present experiment solo art projects, and it’s a great place to check out pieces that will take your mind to places you never knew existed.

The Detroit Institute Of Arts has one of the largest art collections in the US, with more than 100 galleries spanning half a million square feet. The building itself, with its beautiful Beaux-Arts design, is a piece of art all on its own.

The DIA’s most famous work is Diego Rivera’s Detroit Industry Murals, a National Historic Landmark series of 1930s frescoes depicting auto workers at the Ford Motor Company. Gazing up at them from the museum’s Rivera Court, and getting lost among the 27 panels, is a humbling and awe-inspiring experience.

Nearby, the Charles H. Wright Museum of African American History houses the world’s largest permanent exhibit on African-American culture, including more than 35,000 artifacts and materials. Every summer, the museum hosts an annual African World Festival, a free, three-day celebration.

Another local treasure trove is the Museum of Contemporary Art Detroit (known as MOCAD), which famously bears the words, “Everything is going to be alright” in neon across its outer wall.