Experience the Muskegon Lakeshore Through the Eyes of Artists

Explore the vibrancy and history of this West Michigan gem through its numerous sculptures and murals. 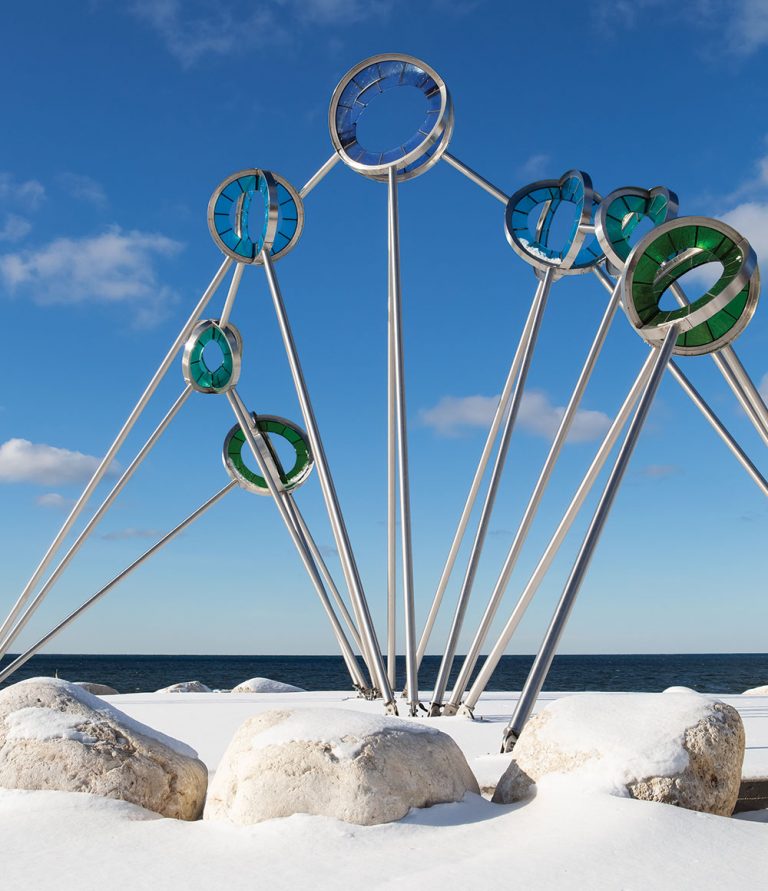 The Muskegon Lakeshore region’s natural beauty is obvious, with its lakeshore and rolling hills serving as major attractions. But there is more to the region than its scenic beauty. That includes a thriving arts scene in Muskegon that carries with it a tradition of public works that date back more than a century.

Since 2018, Muskegon has invited several Michigan artists, many of them from within the region, to create murals, sculptures and monumentally scaled public works.

“We have a wonderful opportunity to install public artworks that are uplifting, positive and reflective of the community and help in the redevelopment of Muskegon.”

The MuskegonCity Public Art Initiative started with $250,000 in seed money for 10 projects that came from a special fund in the Community Foundation donated by Patrick O’Leary, who was CFO of SPX Corp. when it was headquartered in Muskegon and remains a major supporter of community initiatives.

“These new installations are already joining Muskegon’s 50-plus pieces of permanent public art that have been added to the city over the past 100 years,” says Judy Hayner, director of the MuskegonCity Public Art Initiative.

Each piece of art connects to the region’s history in some way, even dating back to prehistoric times.

Moxie, a large-scale, lifelike mastodon sculpture emerging from a manhole in front of the Lakeshore Museum Center, references the mastodon being the official fossil of Michigan. There are 19 other mastodons hidden in locations around town, creating a scavenger hunt, appealing to locals and visitors alike.

The Muskegon Rails Project is another effort fully funded by the MuskegonCity Public Art Initiative. Rusted railroad bridges along Seaway Drive in Muskegon, Muskegon Heights and Norton Shores have been transformed by murals, including the works of Dan Parker (“Happy”), Ed Irmen (“Flora and Fauna”), Ashley Nash (“Pride and Opportunity”) and Jimmy Cobb (“Calm and Quiet”).

Cobb, a Muskegon native, is a senior at the Milwaukee Art Institute and started creating murals when he was in high school. “It’s been an exciting evolution learning what works and what people like, so you learn to speak that language,” Cobb says. “I can see my style change over the years, but also how Muskegon has unfolded and grown. It’s becoming a little art community.”

Cobb first worked on two murals featuring sunflowers and signage for The Valkyrie restaurant, a casual dining venue in North Muskegon. He then connected with the owners of Blended Furniture Market to do a large mural featuring flowers on the side of the store to commemorate the third anniversary of their eclectic home goods shop in 2019.

Making Waves Along the Lakeshore

Another young local artist, Jubenal Rodriguez, has been making waves with his murals, too. The graduate of Kendall College of Art and Design in Grand Rapids is behind a large mural on Third and Monroe streets featuring four Black children with the uplifting message, “Hope Equals Power,” along with a selfie-friendly mural at Rake Beer Project.

Rodriguez got his start as a dishwasher. His relationship with the restaurateurs behind The Deck, a beachfront restaurant at Pere Marquette Park on Lake Michigan, led to him painting beachy sunset-inspired scenes on the side of the restaurant.

“Public art is showing up everywhere and improving the city. Money is being put into it but it’s also giving people a chance to bloom and grow.”

“We wanted to do something fun with bright colors that was beach-themed and really related to the city, especially because people were complaining that the shipping containers used to expand the restaurant didn’t belong on the beach,” Rodriguez says.

Also, “A City Built on Timber” sculpture, which was erected in 2020 at the entry to Muskegon County’s Heritage Landing, honors Muskegon’s Lumber Era.

Move to Muskegon, MI (and Bring Your Job With You!)

Here, you can find great resources to work remotely while enjoying lakeside living.

Another recent addition is a mural titled “What Defines Muskegon,” created by award-winning Detroit-based fresco artist and muralist Dr. Hubert Massey, who studied with Lucienne Bloch, a contemporary of Diego Rivera. The installation, outside of the Mercy Health Arena, was created by a series of community forums over Zoom to gauge local input about the city itself and what makes it special.

“I’m one of only a few artists in the country doing buon fresco painting, and definitely the only African American artist,” says Massey, referring to the painting technique in which alkaline-resistant pigments, ground in water, are applied to wet plaster.

“It is a kind of a la carte view of Muskegon, containing stories that people gave me about the place,” Massey says. “Using that style gives me a lot of freedom to create.”

Want to learn more about living and working in Muskegon? Check out the latest edition of Livability Muskegon Lakeshore, Michigan.