Investing In the ‘Muskegon Way’

Mercy Health leader shares why supporting the community is a huge priority. 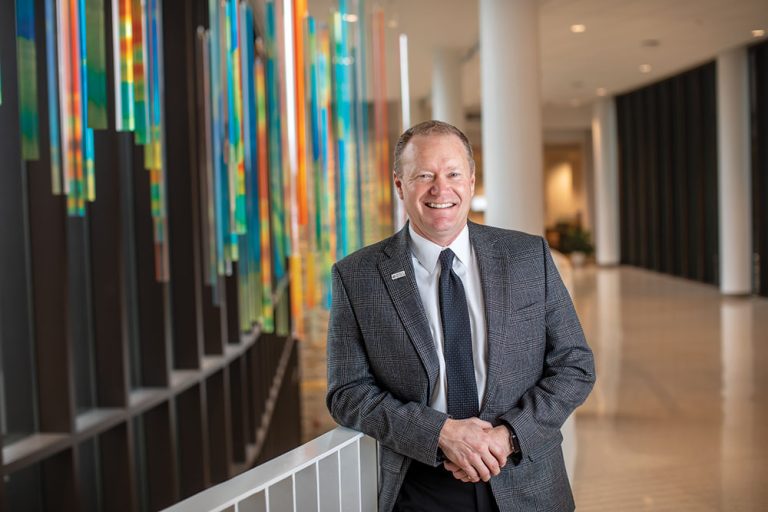 Along the lakeshore, it’s easy to see positive growth is a way of life. And should one doubt it, just ask Mercy Health Muskegon President Gary Allore, who has spent his life dedicated to making his community a better place to live.

As the region grows, Mercy Health has also expanded significantly. With just fewer than 4,400 employees, it is the largest employer in the county.

“We’re a large part of the economy in Muskegon, and we take it seriously,â€ Allore says. “It’s a big responsibility.”

Owned by Trinity Health, Mercy is currently in the midst of a $350 million expansion, consolidating three locations to the Mercy campus and finishing a 10-floor tower spanning nearly 700,000 square feet.

Allore says he is proud of the way Mercy created the new building, first gathering input from physicians, nurses and patients. It features state-of-the-art, private rooms, 20 new operating room suites, 54 emergency room bays and 74 universal care rooms. The hospital will also cater to visitors and family members, with a patient and family resource center, a cafÃ©, courtyards and gardens, and a chapel. Mercy is also in the process of switching record keeping to the online and electronic Epic Systems.

Much of the new building is already in operation, and all patients will be seen at the new campus by the fall of 2020. In addition to the new center, Mercy opened new outpatient centers, most recently breaking ground on a $20 million center in Norton Shores, which is anticipated to open in February of 2021.

“We’re making investments in facilities and technologies to set ourselves up for the next 20 years,â€ Allore says.

The health care company has made a significant investment in the county in other ways, too. The city recently agreed to rename the L.C. Walker Arena, which opened for the first hockey match in 1960, to the Mercy Health Arena. Mercy has agreed to pay $1.5 million for the 15-year naming rights deal. Just off Shoreline Drive and Fourth Street, that corner will also be home to a new $19 million convention center.

It’s all part of a more than $1 billion overall investment into the downtown area, Allore says, which includes many lakeshore projects and redevelopment.

His own path shows a commitment to the area his family has called home for many years. With a degree in economics and management from Albion College, plus a stint as captain of the football and track teams, Allore moved on to receive an MBA from Grand Valley State University.

He first became a public accountant, before realizing a passion for management and then moving to work as the controller for Muskegon General Hospital for eight years.In 2008, he was part of integrating Hackley Hospital into the Mercy Health system. His career in health spans 30 years, and he began serving as president for Mercy Health Muskegon in September of 2017.

Since his childhood, Allore says Muskegon has changed in tangible ways, with shifts away from a blue-collar manufacturing community to more service-and tourism-oriented businesses.

“There’s still affordable housing in the community,â€ he points out. “You’ve got great beaches and great ports.”

Though other areas of Michigan have traditionally received attention for tourism, Allore says there has been a resurgence in the area due to a vibrant lakeshore and the welcoming community.

In his free time, Allore says he enjoys spending time at those beaches and golfing at the Muskegon Country Club.

Inside a community tagline “Watch Muskegonâ€ are the words, “Watch Us Go!â€ and Allore thinks that sums up the way the region is moving forward.

“People who move to Muskegon stay in Muskegon,â€ Allore says. “There’s a lot of huge momentum going on here. I think when people come to this community, they are shocked. People are just overwhelmed by how much it has changed and how it has improved.”