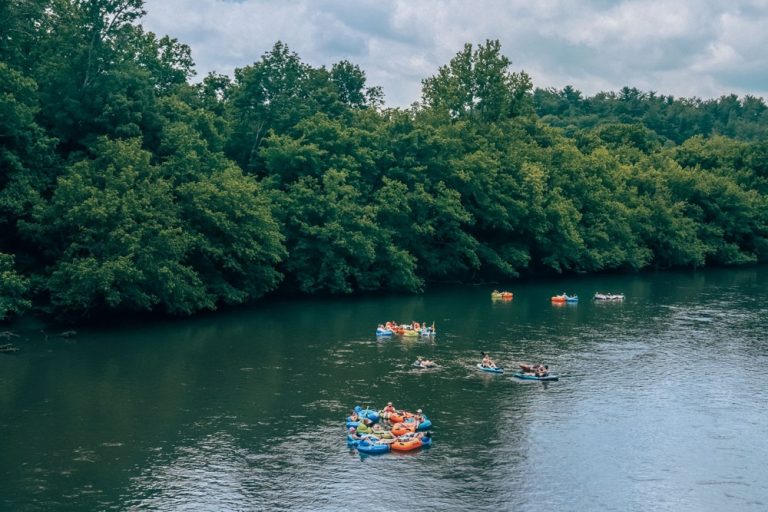 Asheville has a lot going for it, and planned improvements to its greenways and blueways will make it even easier for people to explore and enjoy its climate, mountains, rivers, great schools, the arts, good food and craft beer.

“For example, the city is working with many partners to implement plans to make the French Broad River and Swannanoa River corridors greater places to be, and the city is also transforming the River Arts District to make it a place to easily get around by bike and walking,” says Stephanie Monson Dahl, Strategic Development Office director for the City of Asheville. “The district is an exciting place for artists, and a complete overhaul of that riverfront area will allow visitors easier access to meet the artists and view their works.”

“There has been years of planning and now construction is underway, and the city wants to remind people that the district is still very much open and alive,” Dahl says. “Residents and visitors are encouraged to stop by to see the artists as well as the construction, since this is the best time to see the overall transformation of the River Arts District.”

Discover Why Asheville, NC is a Top 100 Best Place to Live in the U.S.

One artist who has looked forward to the RADTIP construction effort is Julia Fosson, owner of Julia Fosson Encaustic Art. Fosson was a painter in the River Arts District for five years before establishing a home studio, but she still maintains a presence in the district.

“Some artists really want RADTIP and are embracing all the upgrades and changes that will help their businesses, but a few artists don’t want the transformation,” Fosson says. “But that comes with change. They will learn to thrive, not just survive.”

Fosson adds that artists will understand the scope of the project once they see the vibrancy of more people packing new hotels, restaurants and shops.

“All the enhancements will keep people in the district longer,” she says. “Once the construction is completed, it will be really nice. I’m looking forward to it.”

This is How Asheville has become a City for Brewers

Other infrastructure efforts in Asheville include a proposed Woodfin Greenway & Blueway featuring five miles of greenway and a new park. A nonprofit organization called RiverLink has been a catalyst for revitalizing French Broad River blueway trails for more than 30 years.

“About 30 years ago, the chamber wondered how to get Asheville visitors to stay in the city one more day after they finished visiting the Biltmore Estate,” says Garrett Artz, RiverLink executive director. “Studies showed that the river is a recreation attraction that could make people stick around, so river access points were established as well as a French Broad River Paddle Trail.”

Artz says several more projects are proposed along the river, such as establishing a downtown Karen Cragnolin Park in honor of the founding director of RiverLink.

“It will be a 5.3-acre site between French Broad River Park and Carrier Park, which RiverLink also established,” he says. “A lot of planning is still needed for the new park along with some environmental work, so we’re hoping to open it in the next two or three years. We’re planning attractions like an amphitheater, playground and something else children-specific. We will involve the community for suggestions.”

Artz adds that RiverLink also works to improve projects along the Swannanoa River.

“Conservation and outdoor recreation is what we advocate,” he says. “It’s all about adding to the quality of life in the great city of Asheville.”