Skip to content
Home > NC > Asheville > Love Where You Live > Helping the Homeless in Asheville, NC

Helping the Homeless in Asheville, NC 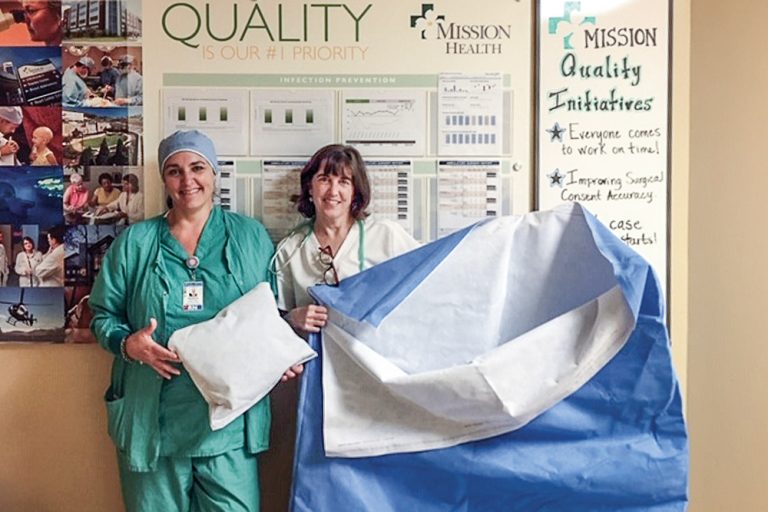 It was a story about a hospital system in Orlando that was helping the homeless by using disposable surgical materials for sleeping mats.

“So, I thought I should start something in Asheville for the winter because winters can be kind of tough here,” says Clark, a perioperative staff nurse at Mission Surgery Center since 2014. “I was thinking about all of these people out in the cold and it was really disturbing, so I just wanted to do something to help.”

That was how the Western North Carolina Sleeping Bags for the Homeless program got started.

Clark says the sterile instrument wrapping that is used at the surgery center on a daily basis  – thousands and thousands of pounds of it – ends up in a landfill, so she asked her operating room staff to save as much as possible and then stored it all in her basement.

Her idea was to sew some of this wrapping together to create something that was warm and waterproof to help others in need.

“I’m not much of a seamstress, but I just put four sheets together to make a sleeping bag,” she explains. “I also make little pillows out of the same material, which are stuffed with other throwaway items like paper gowns.”

Once the program ramped up, Clark partnered with the Asheville Surgery Center OR nurses to gather materials and the Mission Cardiovascular OR team.

“Working with the Mission volunteer office, we found a local sewing group from Emma’s Baptist Church willing to help, too,” she adds.

“I was thinking about all of these people out in the cold and it was really disturbing, so I just wanted to do something to help.”

“These things are tough,” Clark says of the bags, which she sews in her spare time. “They aren’t padded but they are warm and waterproof. People put their clothes and other items in them, too.”

Clark met with the Beloved group street medics – many of whom have been homeless themselves – to find out what the homeless needed most besides sleeping bags.

The answer was bags that were impermeable to rain and snow to carry things in. Clark got feedback on design from the Beloved group and began making and distributing totes, too.

“I have also gotten positive feedback from the homeless who are using them,” says Clark, who moved to Asheville from Indiana in 2005 and says she loves living in the North Carolina mountains.

“It makes me feel good to help those who have nothing,” Clark adds, “and let them know someone cares.”