Skip to content
Home > NC > Asheville > Where to Live Now > Asheville, NC May Be the Most LGBT-Friendly City in the U.S.

Asheville, NC May Be the Most LGBT-Friendly City in the U.S.

This progressive, lively community has a long history of welcoming LGBT visitors and residents 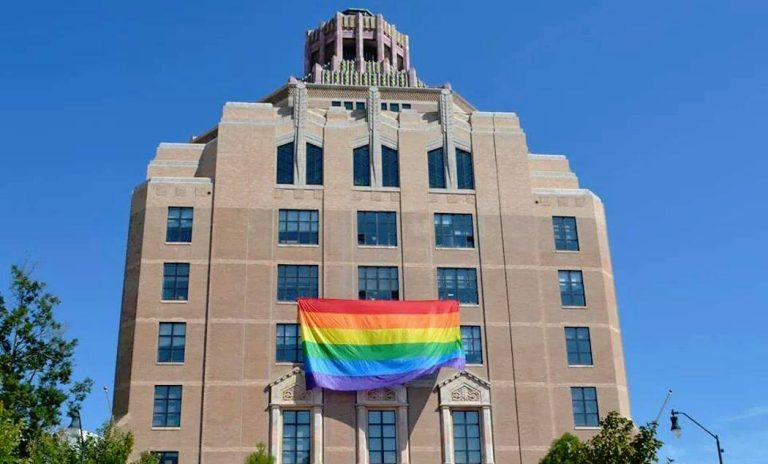 Asheville, NC is known for its stunning Blue Ridge Mountains, charming historic sites, and lively restaurant and craft beer scenes. But increasingly, it’s also becoming famous as one of the country’s most popular spots for LGBTQ visitors and would-be residents.

Asheville, NC: ‘Discrimination, in any form, is not acceptable’

Ranked the 12th Gayest City in America by The Advocate in 2010, Asheville’s friendliness toward gays has been saluted by the New York Times and recognized by CNN. And, in a state making headlines for its controversial “HB2” ruling that restricts transgender people to use only public bathrooms that correspond to their birth-gender, Asheville has stood up — and stood out — in opposition to legislation many believe is deeply discriminatory.

Standing Up for Tolerance

In April 2016 the city council passed a resolution calling for the repeal of HB2 and reaffirming “…its opposition to discrimination, prejudice, homophobia, and transphobia.”

Reiterating the city’s well-known support of its LGBTQ citizens, Mayor Esther Manheimer wrote earlier in a welcoming letter, “We invite you to celebrate our diversity, openness, and welcoming atmosphere. There is no need for a physical display of rainbow flags everywhere because you will find LGBTQ ‘Welcoming’ businesses and services throughout Asheville.”

Stirring words. But Asheville does more than just issue official statements. Consider just a few aspects of life in this progressive city:

The latest U.S. Census figures report that Asheville has 83 percent more gay and lesbian residents than an average American city.

These Are the Most Googled Questions and Answers About Asheville, NC

Each October more than 10,000 people attend one of the most colorful Pride celebrations in the country, the Blue Ridge Pride Festival. It’s perhaps the most widely enjoyed party in Asheville, by LGBTQ and straight folks alike.

Buncombe County, where Asheville is located, recently elected its first openly lesbian county commissioner – and her sexuality was not considered an issue. Rev. Jasmine Beach-Ferrara, an ordained minister, stressed that she was not a single-issue candidate.

The city celebrated the first gay wedding in North Carolina after the Supreme Court legalized same-sex marriage in June 2015. Today it is a major destination for gay weddings, which were celebrated in April 2016 with the LGBTQ Wedding Expo, the first-ever event of its kind in western North Carolina.

The area’s LGBTQ young people are supported by groups like Youth OUTright, which provides outreach, counseling and a fab “YO Prom” each year.

And need we say that the city is home, beyond what you’d expect in a city of 87,000, to flourishing gay-owned bookstores, hospitality businesses, retail shops and galleries – not to mention insurance agencies, real estate companies, arts-related businesses, personal services and much more – that serve the community at large.

A Place Unlike Any Other

“Asheville is unlike any other place, and not just from the gay standpoint. It’s the city itself. Downtown is lively any night of the week, and you’ll find people walking everywhere, sitting in cafes and restaurants, people outside eating, buskers on the street playing,” said Jerry Conner, a longtime Ashevillian, who operates the Gay Asheville website, a jam-packed resource for all things LGBTQ in the area.

“Asheville is different in that there is no ‘gayborhood,’ or a gay mecca,” he said. “It’s all of Asheville. It’s amazing how many people stand up for the community within Asheville itself, from all walks of life, and that makes a big difference here.”

Conner’s years in Asheville have given him a unique chance to watch the evolution of the city’s gay community. And while it celebrates diversity today, in fact the city’s status as a gay-friendly community goes way back to the early 20th century, when artists and writers like Scott and Zelda Fitzgerald and Thomas Wolfe came to write in the permissive, bohemian atmosphere that earned Asheville the slightly risqué nickname “the Paris of the South.”

“We’ve really always been very diverse and open, and a gay environment even back in the Thirties,” Conner says. “Unlike most places back then, Asheville just turned a blind eye to it. The oddity of all of this is that here we are in the middle of the Bible Belt — but then Asheville was always kind of special.”