How Local Shops are Brewing Up Business in Downtown Elizabeth City 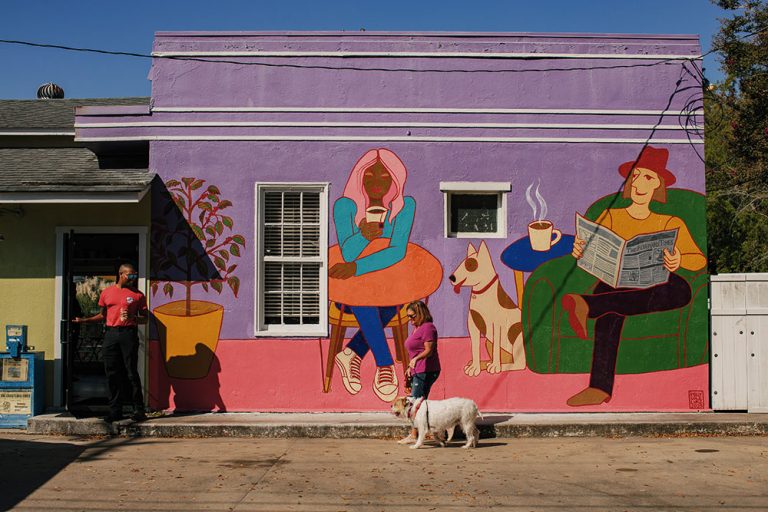 Though storms are common in harbor towns like Elizabeth City, there’s something else brewing here – coffee and beer. In fact, three local companies — Muddy Waters Coffeehouse, Ghost Harbor Brewing Company and The SweetEasy, a bakery and coffee shop — have helped revive downtown Elizabeth City by refurbishing the buildings that house their businesses.

“I had always wanted to open a coffee shop,” says owner Audra Marx. “A lot of people said they didn’t think it would work, but obviously, it’s been great. It’s one of the best decisions I’ve ever made.”

Two decades ago, Marx took over a derelict service station and was one of the first businesses hoping to revitalize downtown.

“I wanted to build a place where the whole community could feel welcome to come and hang out with each other,” Marx says.

“It worked really well – it was all spectrums of society.”

In addition to being a place where people can chill and put together puzzles, read or play board games, it offers high-quality food and beverages. Marx’s husband is the resident coffee roaster for blends people enjoy in-house (and order across the country), and the recipes for the bakery items made from scratch daily were developed by a pastry chef.

Charming neighborhoods and vibrant communities offer an assortment of fun things to do in the Elizabeth City area.

When Casey Heard moved to Elizabeth City for her husband’s Coast Guard assignment, she knew it would be the place to fulfill their dream of opening a coffee shop and bakery.

“We saw the potential in the downtown area,” Heard says. “It’s a gorgeous, historic waterfront district. There was a hunger for more things, and the timing was right.”

“We saw the potential in the downtown area. It’s a gorgeous, historic waterfront district. There was a hunger for more things, and the timing was right.”

10 Ways to Get Out and About in Elizabeth City, NC

Elizabeth City is a ‘Harbor of Hospitality’ and life in this town is swimming with opportunity.

Heard bakes everything from scratch, while her husband is the coffee expert. As for the coffee shop’s speakeasy theme, it was inspired by the death of a dear friend who had always talked about one day having a speakeasy.

“He and my husband really bonded over that – they loved the nostalgia of going back to old-fashioned days when everything was classy and people enjoyed the finer things in life,” she says. “We wanted to create a place where people could hang out and enjoy something handcrafted and meticulously made.” They combined their dreams, opening The SweetEasy, a bakery and coffee shop inspired by the 1920s. “We just absolutely love everything about the whole era,” she says. “We want people to get a whole vibe, a whole experience when they come in.”

When Ghost Harbor Brewing Company got its start, Elizabeth City was in the throes of the recession, and its downtown resembled a ghost town, a far cry from its roots as a bustling port on the Pasquotank River, a hub of trade and commerce in the mid-to-late 19th century.

“The building we’re in is actually an old livery and stable for the shipyard,” says Thomas Reese, who owns the brewery with his wife, Tabitha. “Our town slogan is the ‘Harbor of Hospitality,’ and we came up with our name by combining the two.”

Wanting to honor the area’s history while breathing new life into it, the Reeses restored the building, which faces a wide cobblestoned alleyway. In time, restaurants came in, and the city hung strings of lights all along the alleyway for ambiance, making it a destination. 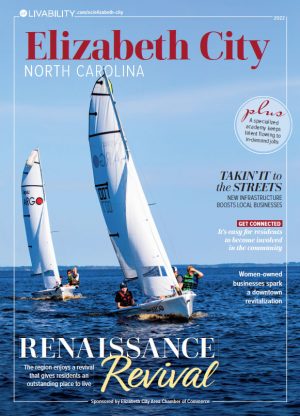 Even aviation-related businesses need to put down roots — and if you’re looking for quick, easy access to an airport runway system in North Carolina, there’s no better place to… END_OF_DOCUMENT_TOKEN_TO_BE_REPLACED