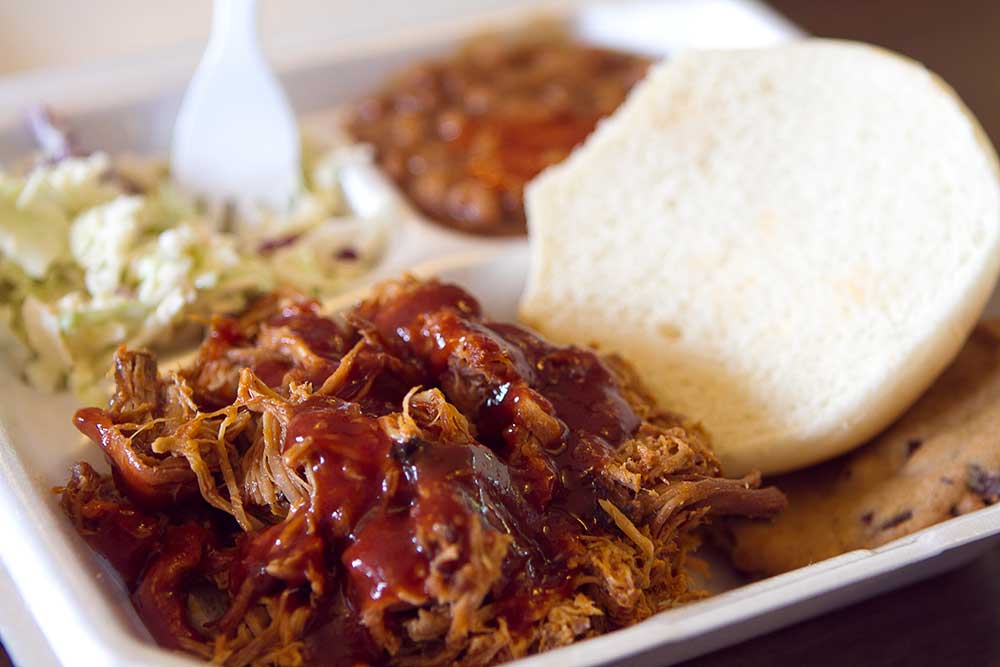 North Carolina / Courtesy of xtina under a CC 2.0 license.

When it comes to barbecue, certain regions have their own unique style, and North Carolina’s BBQ is among the most specific and interesting styles. The best-known BBQ regions include North Carolina along with Tennessee/Memphis, Kansas City and Texas. All of them are excellent, but none are quite the same. North Carolina shares the most with Tennessee BBQ, in that they both tend toward pork first, then meander into other meats. While it’s called Carolina barbecue, you’ll find the style stretching from Virginia all the way down to South Carolina, and sometimes spilling over into eastern Kentucky, Tennessee and Georgia along the mountainous frontiers.

What makes Carolina barbecue special is its sauces, primarily the tangy vinegar-based sauce the region is known for, which gets progressively sweeter and more tomato-sauce heavy as you move west, out of Carolina and into Tennessee. The second sauce is often called “Carolina goldâ€ – a zippy, often a bit spicy mustard-based sauce that fans swear by, and which appears with greatest frequency as you approach South Carolina.

Barbecue, for the record, is the food of the poor, the ordinary, not the rich folks in the big houses – an attempt by the regions’ earlier settlers and African-American slaves to turn tough cuts of meat into something tender and succulent. With pork, that means cooking it low and slow for hours over wood or charcoal, until the cartilage and fat melt, and the meat is rendered fall off the bone tender.

Some places swear by heavily wet mopping the meat as it cooks, others dry rub with seasonings, some do both and others neither. And great barbecue is made in each of these ways. You will also find that some places pull their pork, others chop theirs – and both are equally delicious, if somewhat different in texture.

People also have strong opinions about what the very best is, but here are five places (in no particular order) to get barbecue in North Carolina that won’t let you down. My favorite is made by my uncle, Bill Howell, but if you don’t have it at home, try these great BBQ restaurants in North Carolina:

Native North Carolinians swear by this place, which serves pork, chicken, ribs, beef and turkey breast. The assortment of proteins is super-popular these days (the Kansas City Barbecue Society, which sets most barbecue competition rules across the whole nation, judges pork, ribs, chicken and beef, and it’s expanded a lot of restaurant horizons). There’s beer on tap here, as well as the usual soft drinks and tea, and the setting is warm and rustic. For something different, start out with creamy grit fritters or portobello mushroom fries. Green River serves some great trends too – try the pulled pork mac and cheese or the barbecue nachos – both are delish. On the side, stick with true Southern – collard greens, creamed spinach, tomato pie, homemade slaw (de rigeur in barbecue) and homestyle fries.

The Pit in Raleigh

Everyone swears by this one, though it’s on the fancy side of North Carolina ‘cue – not just a hole-in-the-wall joint – the owner is from tiny nearby Roanoke Rapids. The lines, especially on weekends, are out the door, and for good reason.

NC State cheerleader Emily Suiter says, “It’s more of an upscale BBQ place that is beyond packed (reservations a week in advance at least), huge servings, the best BBQ!â€

You’ll also find some Texas-style brisket on the menu, long with ribs, turkey and even barbecue tofu. Well, Raleigh is a college town. The upscale aspect means you get a great bar with enough whiskey to meet your Southern drinking expectations. If you feel like putting on something more than a T-shirt and sneakers for ‘cue, this is your place. (Bonus Raleigh choices worth making include Cooper’s – where you might run into U2 if they’ve just played a show locally – and rustic and delightful Ole Time Barbecue.)

This one comes recommended highly from some well-heeled folks who know small and local like nobody’s business. Wilber’s is a true joint along the road, opened by Wilber Shirley and his business partner in 1962 (he bought the partner out a few years later). While it may not be in the high rent district, it’s played host to presidents George H.W. Bush and Bill Clinton, plus a host of politicians and celebrities. Known for its spicy barbecue sauce, the menu is full of the pork and chicken you expect, plus delicious Brunswick stew, fried chicken livers, and fish and seafood – including fried oysters in season. On the side, expect slaw, hush puppies and potato salad. This is real Southern food of the sort your granny might have made (well, my granny did).

Allen & Son is a pretty old school joint in the Chapel Hill vicinity, albeit a bit out of town and rural, where you’ll get some classic Carolina ‘cue. Make sure to save room for banana pudding or the pound cake – or the pecan pie, too, or you’ll regret it! Get a plate piled high with chopped pork, hush puppies and coleslaw, but if you really must, they do some pretty great burgers, too. If you need a salad, they’ll give you one topped with real bacon. Throw your diet to the wind and just indulge in good Brunswick stew, classic barbecues sides – coleslaw, potato salad, baked beans, plus a good, rich vinegar sauce.

High on nearly everyone’s list and popular with East Carolina students, this tiny hole-in-the-wall, dating back to the late 1970s, serves chopped ‘cue, generally topped with a sweet slaw. Unlike most places, we’re told B’s still cooks whole hog – you’ll find a vast majority of joints these days cook shoulders and butts instead, but whole hog is an art form, born of long experience and passed down through families. You’ve got to mind the fire for long hours, making sure all is cooked evenly. On the side, also find beans, cornbread and potatoes. The chicken is also worth a try, and the tangy vinegar sauce is darned good. Author J.D. Rhoades swears by B’s, and you should too.

Some bonus places to hit if you’re in the vicinity:

It’s more of an upscale BBQ place that is beyond packed (reservations a week in advance at least), huge servings, it’s the best BBQ!