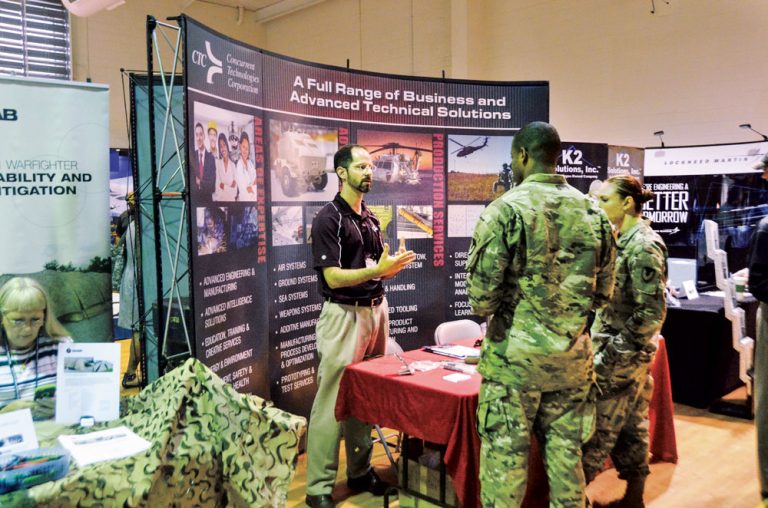 One of Eastern North Carolina’s greatest assets when attracting expanding and relocating businesses is the deep pool of talent offered to employers, including some 17,000 people transitioning from the region’s military installations into high-demand fields.

“We run a database of transitioning military personnel data on our website that’s searchable,” says Scott Dorney, executive director of the NCMBC. “Any economic developer or business considering expanding can go to this database, put in a keyword for the type of transitioning military person that they’re looking for and find out how many people are available with that particular skill by pay grade.”

Former military personnel are highly sought after for a number of reasons.

“The primary attraction is that [transitioning military personnel] are highly skilled; they are trainable; they are highly disciplined; and they have great soft skills, such as leadership and teamwork,” Dorney says.

If transitioning military need additional skills training, Dorney says the NCMBC along with the region’s network of community colleges can help fill those skill gaps.

“We were able to show the community college that there was a lot of demand within the industry for jobs, such as solar installers, and we already had a great potential workforce,” he says. “We are a catalyst to getting new initiatives and skill-building programs started because we have access to the community college system, to the transitioning military personnel and to the employers that actually seek to hire them.”

This is How Eastern North Carolina’s Economy Thrives

The Fleet Readiness Center East on board Cherry Point Marine Corps Air Station (MCAS) helps grow the region’s workforce by introducing students at a young age to careers in STEM. The organization, which provides maintenance, engineering and logistics support for Navy and Marine Corps aviation, is an active participant in STEM East (a regional consortium of public schools and employers) reaches out to local campuses to boost science, technology, engineering and mathematics curricula.

FRC East uses a mobile Fabrication Laboratory — a trailer equipped with laptops, 3-D scanners and printers and laser cutters — to help students and teachers with STEM projects. Students and teachers are often invited to tour the facility and interview engineers about career paths.

“During the past year, FRC East has supported more than 30 engineering outreach requests from local middle schools and high schools, community colleges and universities in the forms of facility tours, job shadowing, mentoring in schools during class sessions and after school clubs, participation as judges in competitions, and specialized events such as fairs, showcases and expositions,” says John M. Olmstead, public affairs officer, Fleet Readiness Center East.

“Participants are placed in engineering student trainee positions and receive professional work assignments and experience while pursuing a four-year engineering degree,” Olmstead says. “The program also serves as a resource for the FRC East Command to develop highly motivated employees who wish to remain in Eastern North Carolina.”

“The Pathways Internship Program is an opportunity for students to gain work experience while pursuing undergraduate or graduate programs. The Engineer Scientist Development Program is geared towards entry-level engineer and science professionals interested in becoming civilian employees in the Navy’s growing acquisition workforce. Veterans are a highly valued part of our workforce and paramount to the mission we serve every day,” he says.

How Eastern North Carolina Became a Leader in Renewable Energy