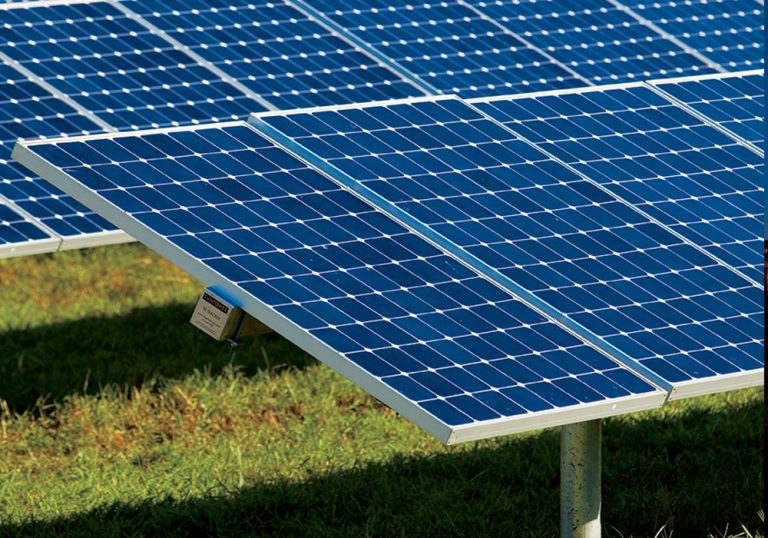 In late 2010, Duke Energy Renewables completed its first solar project in eastern North Carolina, a 20,000-panel facility located just outside downtown Murfreesboro that generates enough electric power to supply 700 homes. In hindsight, it’s clear that the Murfreesboro project was on the leading edge of a surge in solar development in the eastern part of the state. In the six years since, Duke Energy Renewables has completed a far-flung array of other solar power plants in the region, with additional facilities in Beaufort,  Edgecombe, Perquimans, Pitt, Northampton and Wayne counties, among others. Total investment in solar farms has exceeded several billion dollars over the past few years in eastern North Carolina..

“The landowners get lease payments, the communities get tax revenue without a burden on infrastructure, there are short-term jobs [added] during the construction cycle, and there is long-term employment for the ongoing operation and maintenance of the sites,” Caldwell says.

Another less obvious benefit is the development of a highly skilled workforce, which gains experience as it moves from new project to new project.

While the sun is shining on solar development, wind energy in Eastern North Carolina is on an updraft. In December 2016 the first commercial-scale wind farm in the state went into operation, one that features 104 turbines that straddle two counties – Perquimans and Pasquotank.

Avangrid Renewables, developer of the $400 million project, has a buyer for power produced at the wind farm – the e-tail giant Amazon. The farm will generate 208 megawatts of electricity, enough to power more than 61,000 homes.

“The project created about 250 construction jobs, and hotel occupancy during the 12 to 13 months the project was under construction was up 30 percent, with taxable retail sales up 10 percent in Pasquotank,” Harris says.

Much like Duke Energy Renewables’ solar projects, the wind farm will provide lasting economic benefits.  Pasquotank County will receive $270,000 in property tax revenues from the project for 30 years, while the land owners receive $6,000 per tower in land lease.

“And the roads that were built to get the towers and turbines and blades in place have made it easier for the lease holders to manage their crops. There are also approximately 15 permanent employees who make an average of $80,000 per year. So it’s a win all the way around,” Harris says.

Never mind the fact that the wind farm has become a source of community pride. “It’s positioned so that anybody who is on U.S. 17 South comes very close to the turbines. Drivers are intrigued by it,” Harris says.

Yet another new energy project that promises to invigorate multiple counties in Eastern North Carolina is the Atlantic Coast Pipeline (ACP), which will carry natural gas through West Virginia, Virginia and much of North Carolina before terminating near the South Carolina border.

Northampton County in particular will benefit as the operation center for the pipeline and the North Carolina compressor station will be located in the county, says Gary Brown, director of the Northampton County Economic Development Commission.

“The benefits from the project will be in the range of $1.5 million per year,” he says, noting that sustained, high-wage employment opportunities will also be a major boost for that part of rural North Carolina.

More notable, still, is that the ACP could attract new businesses because it will substantially increase the availability of natural gas for industrial, commercial and residential customers across the region.

“We are already seeing inquiries on the part of companies that are natural gas dependent—heavier industry-type companies ranging from aerospace to automotive to pharmaceuticals,” Brown says.

“The climate, our geographic positioning, the terrain, the infrastructure and our proximity to electric transmission facilities are all combining to make us a portal for solar development and energy production in general,” Brown says.