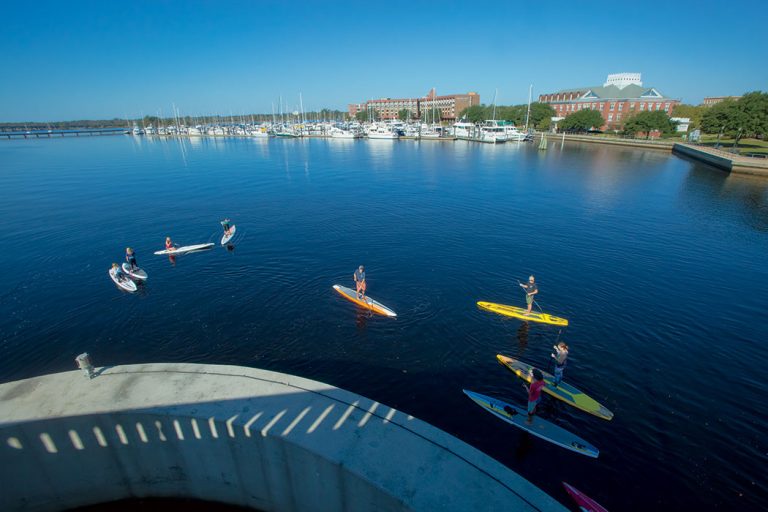 Outdoor recreation in Craven County can be summed up in three words: Water. Woods. Wow.

Craven County enjoys the rare combination of being both surrounded by water and covered with forests. The county seat of New Bern sits at the confluence of the Neuse and Trent rivers, which flow into Pamlico Sound and then the Atlantic Ocean only a few miles away. As a result, the smaller streams and creeks that permeate the county range from fresh water to brackish to salt, creating a delightfully diverse ecosystem throughout the region.

Why New Bern is a Great Place to Live

But what makes Craven County truly special is that much of this water can be found in and around the densely wooded, 160,000-acre Croatan National Forest. There are 40 miles of streams and 4,300 acres of lakes within the forest, which is bordered by tidal rivers on two sides and the Bogue Sound on the third.

“There are all these heavy forest settings right next to large bodies of water. You don’t generally see that together in most places,” says Cody Hutchinson, Croatan National Forest district ranger. “So the views from the water – even from the smaller creeks – are really awe-inspiring.”

With so much water to be found in the region, it is no surprise that boating is one of the most popular outdoor recreational activities in Craven County. In 2013, BOATUS Magazine named New Bern as one of the top 10 boating towns in the country. Several marinas are in the downtown area for larger vessels (including a few yachts), and numerous boat ramps throughout the county for smaller boats, kayaks and canoes.

One of the most popular ways to enjoy the water, see the sights and get some exercise is through paddle boarding. The Twin Rivers Paddle Club meets monthly and is a great place for new paddlers to learn more about the activity.

Stand Up Outfitters sells and rents paddle boarding equipment and offers classes, with a location in downtown New Bern as well as a waterfront shop on Lawson Creek. In 2016, the website supconnet.com (SUP stands for Stand Up Paddleboard) named Stand Up Outfitters one of the top three outdoor shops in the nation.

“This area is a paddler’s paradise,” Stand Up Outfitters co-owner and instructor Kate Lewis says. “The reason for that is there is a wide variety of environments you can paddle in that give you a lot of different scenery. It’s a great way to see the town of New Bern and the area around it.

“There’s urban scenery on the waterfront tour of New Bern along the Trent River, which is a very serene, lake-like river. You can see downtown and all these gorgeous historic homes along the shore. And then there are remote areas where you can feel like you’re really far away in the middle of nowhere, when in reality you’re 10 minutes outside of downtown.”

You can also get that far-away feeling in the Croatan National Forest, even though the northern edge is just a few miles from New Bern. The Croatan is the only true coastal forest in the eastern part of the U.S., and is the only National Forest that has a saltwater ecosystem.

“We have estuaries that come straight from the Atlantic Ocean, and also the brackish water. So there are all these different types of ecosystems people can view,” Hutchinson says. “We have a number of trails that people can enjoy to look at the spectacular views along our waterways.”

Of course, the views go both ways, as boaters and paddlers can savor the shore scenery from the water. Lewis says the Flanners Beach and Oyster Point campgrounds within the Croatan are excellent places for paddlers to access the Neuse River because the water there is shallow with a soft, sandy bottom.

“New Bern is really a great destination for anybody who is an active-lifestyle enthusiast and enjoys taking advantage of our waterways and natural beauty,” Lewis says. “We’re getting a more active population moving to New Bern. There is a larger population – from seniors to millennials – who just enjoy being outside and recreating. And what we have in New Bern is very appealing to them.”