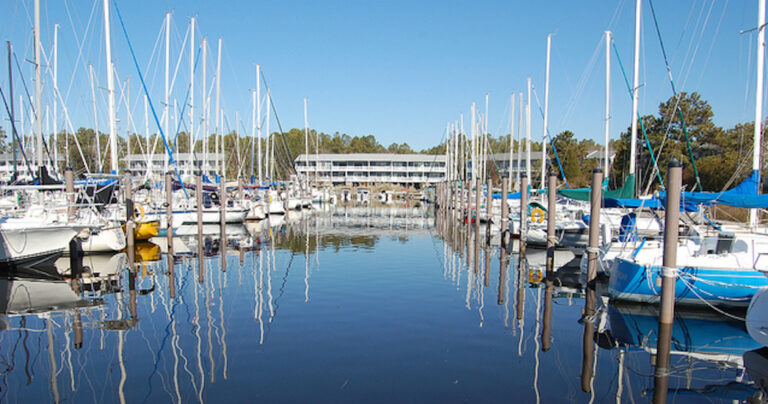 New Bern / Courtesy of Bob Dumon under a CC 4.0 license.

Whether single, a new family or a retiree, New Bern's more than a dozen neighborhoods and incorporated communities have something to offer residents at all stages of life.

Downtown New Bern known for its perfectly manicured lawns and large, palatial homes – many of which date back to the 18th century. Those historic homes are still a defining symbol of downtown living. But recently, younger residents have been moving downtown into historic buildings-turned condos and town homes to take advantage of the town center's amenities, including more than a dozen upscale restaurants, quaint shops, museums, galleries and entertainment venues. Downtown residents can also take advantage of the riverfront and easy access to fishing, boating and biking opportunities.

The Ghent neighborhood is another of the town's four historic districts and is listed on the National Register of Historic Places. Home prices in the Ghent neighborhood range from $135,000-$275,000. Residents have quick access to downtown New Bern shopping, dining and entertainment venues as well as a number of amenities within the neighborhood itself, including Fort Totten Park and Lawson Creek Park, which features fishing piers, boat launches, nature trails and soccer fields. The Ghent neighborhood is also walking distance to the Twin Rivers YMCA and the Y’s Olympic-sized pool, weight rooms, fitness classes and racquetball courts.

The Riverside neighborhood was New Bern’s first planned suburb and is also listed on the National Register of Historic Places. Homes in this waterfront community vary from spatial brick homes to smaller bungalows. Home prices vary just as much. Some of the historic homes can cost up to $400,000 – particularly those with a waterfront lot along the Neuse River – but real estate agents say ambitious newcomers can sometimes score a fixer upper for well under $100,000.

Fairfield Harbour is one of New Bern’s more affluent neighborhoods. The 3,000-acre development features waterfront properties, four marinas with boat slips for homeowners, a golf course, nine tennis courts and three pools. The development also offers easy access to the Neuse River and the Intra-coastal Waterway and is just a few minutes from downtown. Fairfield Harbour is a mixed community with both single-family homes and condominiums and townhomes. Waterfront properties and homes along the Harbour Pointe golf course can range from $225,000 to $550,000, while homes in the subdivision’s interior start in the low $100,000s.

The Riverbend community began as a subdivision but quickly grew to the point that community leaders decided to incorporate in 1980. The town of Riverbend now includes a municipal building and meeting hall, parks with playgrounds and a baseball field. While Riverbend is also located along a river, the Trent River, the homes here are much more affordable than in other waterfront communities. A private marina allows property owners to affordably dock their sailboats and gives families easy access to the river and water activities.

Retirees are drawn to New Bern’s newest and largest neighborhood. The community, which will include more than 2,000 homes and an 18-hole golf course designed by architect Bill Love, is also appealing to young professionals as each home is wired with fiber optic connectivity and the community features a fitness center, tennis courts, walking trails, parks and a community pool.

One of the town’s oldest neighborhoods, Trent Woods has matured into one of New Bern’s most desirable as well. The community is close to several quality-of-life amenities, including CarolinaEast Medical Center, the Coastal Carolina Regional Airport and two top-ranked elementary schools. As an incorporated town, Trent Woods is actually comprised of several neighborhoods, including Manning Park, Holly Hills, Chelsea, Trent Shores and Ward Point.