Skip to content
Home > NM > Rio Rancho > Where to Live Now > The Future is Now in Rio Rancho, NM and Sandoval County

The Future is Now in Rio Rancho, NM and Sandoval County

Affordability, great communities and stunning views are a few reasons why tech firms are excited about this region. 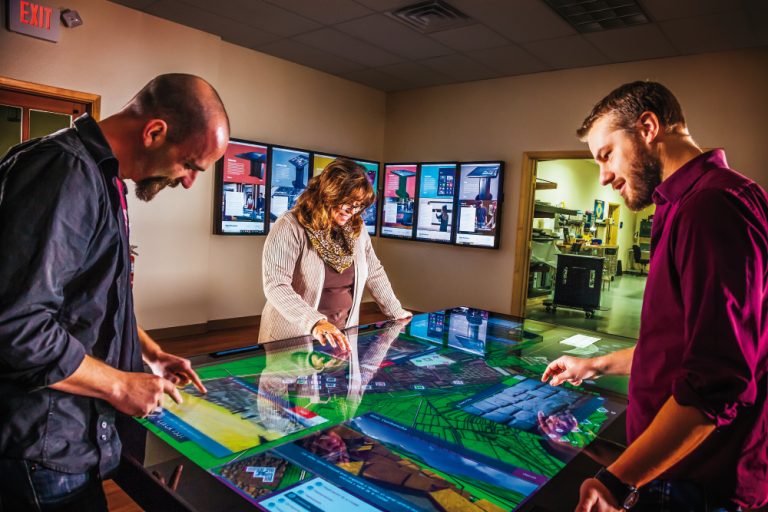 Sandoval County’s innovation economy is fueled by technology-driven firms turning new ideas into world-changing reality while creating the jobs of tomorrow for the skilled workforce they need to succeed.

Those companies operate in leading-edge sectors, including aerospace, optics, computer technology, communication and solar energy. In addition to the educated workforce that helps them thrive, Sandoval County offers proximity to key research assets, including the University of New Mexico and Sandia National Laboratories.

The business advantages of being located in Sandoval County were obvious to the leaders of Ideum.

The standout quality of life was a bonus that has made it easy to recruit and retain top talent for its operations in Corrales.

“œWe are thrilled to be here in Corrales and in Sandoval County,” says Jim Spadaccini, Ideum’s founder and creative director.

“œIt is a great place to live and work. Over the years, we’ve assembled a fantastic interdisciplinary team that feels the same way. We’ve been able to work on creative projects with some of the best-known museums in the country and Fortune 500 companies while calling New Mexico home.”

Ideum is a creative company focused on using emerging technologies to design public installations and products that lead to meaningful user experiences. The company creates unique products and engaging interactive exhibits for a wide range of clients and contexts.

“œPrimary reasons for the move from Albuquerque included more favorable tax rates, a much lower crime rate and some of the best public schools in New Mexico,” says Craig Tayler, vice president of sales and marketing. “œAdditionally, the overall cost of living is very low compared to other cities of similar size around the country.”

ThreeSixty is part of a growing number of technology-based firms that have made the choice to locate within the community, alongside other well-known tech giants such as Intel, Tayler says.

The company was pleased to discover the city maintains a wide range of affordable housing options, including unique developments such as Mariposa, a world-class planned community developed around the natural terrain and offering spectacular mountain views.

“œMost importantly, for businesses considering a move to the community, Rio Rancho’s city government goes out of its way to interact with both business and its residents through a variety of town-hall-like events throughout the year,” says Tayler.

One of New Mexico’s most famous companies, chipmaker Intel, has had operations in the state since 1980 and today employs about 1,200 at its Rio Rancho campus. Intel manufactures microprocessor technology that powers data centers and hundreds of millions of smart and connected devices worldwide.

Rio Rancho has also been an important site for development and manufacturing of Intel Silicon Photonics, a new class of high-speed optical connectivity that replaces copper wires with fiber optics for data transmission. Intel’s 3D Xpoint Technology Development and NAND Research and Pathfinding teams work at the site.

The first time Ideum owners Spadaccini and Angela Arzave traveled to New Mexico, they fell in love with the Land of Enchantment, says spokeswoman Genevieve Brown.

“œThe quality of life and cost of living in New Mexico make it a very attractive place to do business and raise a family,” she says.

“œWhile Ideum now attracts candidates from all over the country, we have access to a large local pool of qualified and well-educated workforce. The support we receive from the Sandoval Economic Alliance, the state’s Job Training Incentive Program and other programs have been crucial to our success.”