Skip to content
Home > OH > Cleveland > Where to Live Now > 16 Reasons to Move to Cleveland, OH

16 Reasons to Move to Cleveland, OH

LeBron James moved back to Cleveland, and here's why you should consider following him. 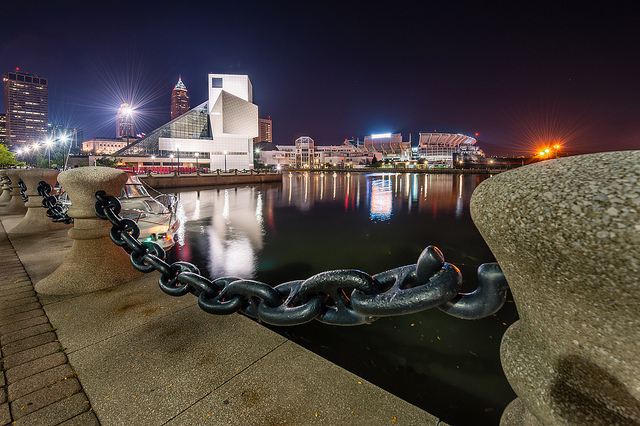 Whether its an NBA player returning to his hometown or a football team that went from last in the league to playoff contender, Cleveland, OH is full of comeback stories. The city’s own comeback story is still being written, but the previous chapters indicate Cleveland has entered a Renaissance period. After years of economic and population decline, the city is making major gains and attracting people back to a reinvigorated downtown.

10 THINGS TO DO IN OHIO: Take a look at our state-wide picks.

Here’s our list of 16 reasons you should consider moving to Cleveland:

1. Cleveland’s singles are ready to mingle

Those looking for a love connection have good odds of finding a match in Cleveland, a place with more singles than just about any other city in the country. According to the U.S. Census, more than 46 percent of adults are unmarried. Locals looking to mix and mingle often head to Barley House, a restaurant and bar with a hot nightclub scene.

More than 100 nationalities are represented in and around Cleveland, and when it comes to racial diversity, few cities offer such balanced demographics. The annual One World Festival celebrates the ethnic cultures found throughout the city. Other festivals like The Latino Heritage Festival, Greek Festival, Irish Festival, and many smaller events held in neighborhoods and restaurants give residents the chance to connect with different cultures.

This charming, mixed-use neighborhood is made up of equal parts of history and hip. Cleveland’s Warehouse District attracts young professionals and modern families looking for excellent dining options, vibrant nightlife and great shopping. Many of the area’s historic buildings have been gutted and turned into luxurious living spaces while maintaining the character of the neighborhood that overlooks Lake Erie.

4. Dick Goddard watches out for you

Shortly after his 83rd birthday, Cleveland weatherman Dick Goddard had to be rescued from rising flood waters that swamped his car. It’s safe to say Goddard would have been deeply missed. He’s reported on the local weather scene for more than 50 years. Also an author and cartoonist, Goddard is an avid animal activist and a true treat to watch on air.

Considered one of the cleanest beaches in the country and the best on Lake Erie, Huntington Beach gives residents opportunities to swim, play in the sand and take in the view. During the summer months, there’s an ice cream stand at the beach and lifeguards keeping an eye on everyone.

6. You’d be near the Great Lakes Science Center

From a six-story OMNIMAX Theater to a restored 618-foot freighter, the Great Lakes Science Center lets families immerse themselves in fun, educational experiences. More than 100 exhibits allow children and parents to explore the wonders of science, space and technology. The center hosts limited special exhibitions throughout the year.

Industrialist John.D. Rockefeller gave Cleveland more than 270 acres, most of which has been preserved as an urban park. The Rockefeller Park Greenhouse, which dates back to 1905, holds a vast collection of exotic and colorful plants that inspire and fascinate. The park also contains a babbling brook, lagoon and walking paths.

Regarded as one of the top four hospitals in the country by U.S. News & World Report, the Cleveland Clinic is known for innovative, groundbreaking medical accomplishments, including the first near-total face transplant and the discovery of an intestinal bacteria product that can predict heart disease. This research hospital follow a patient’s first principle and delivers outstanding care.

10. You could compete in Cleveland’s Corporate Challenge

Since 2002 companies have competed in games like skeeball, mini golf, tug-of-war and cornhole to determine Cleveland’s corporate champion. Money raised during the Corporate Challenge goes to support local charities. Winners of the challenge get to decide what nonprofit group receives their cash awards.

11. Cedar Point is just an hour away

If rollercoasters and thrill rides float your boat, it’s hard to top Cedar Point, which is about an hour from Cleveland, overlooking Lake Erie. It’s even closer if you live on Cleveland’s west side. This 364-acre amusement park has more than 15 coasters and another dozen rides that spin you around, drop you and give you that funny feeling in your stomach.

12. Homes in Cleveland are more affordable

Home prices in Cleveland come in well below those of major cities like New York City, Chicago and San Francisco. Even compared to cities with similar populations, homes in Cleveland often cost half as much. The median home value in the city limits is $80,900 according to the U.S. Census.

13. Sports teams in Cleveland give residents much to cheer about

Cleveland is home to some of the most recognizable sports teams in the country. There’s the Cleveland Indians (MLB), the Cavaliers (NBA), the Rockers (WNBA), the Browns (NFL), the Gladiators (Arena Football League) and the Lake Erie Monsters (American Hockey League). Add to great high school and college teams, and it’s hard to beat Cleveland when it comes to sports.

14. LeBron James is back

Lebron James unites people. Basketball fans either love him or hate him. But no matter what you think about his skills and some of his antics on the court, it’s hard to deny that he makes the community he’s living in a better place. He routinely visits local schools, nonprofits and civic groups, which he talks to about commitment, dedication and hard work. The LeBron James Family Foundation supports numerous causes including initiatives aimed at providing children with educational opportunities, resources and assistance. James is a strong supporter of the nearby Akron Public School system and launched a program called Wheels for Education, and he has helped other groups like After-School All-Stars, Boys & Girls Clubs of America, Children’s Defense Fun and Gabrielle’s Angel Foundation.

15. Make your own Christmas story in Cleveland

Cleveland provided the setting for what has become one of the most beloved Christmas movies of all time, A Christmas Story. The film chronicles Ralphie’s quest to get a Red Ryder B.B. gun and the antics of the Parker family during the 1940s. Much of the action takes place in the Parker family’s home, which is located on West 11th Street in Cleveland. The home has been restored to look as it did in the movie and is open for tours. Several other locations in Cleveland made scenes in the movie, including the Higbee Department Store, which is now home to the Horseshoe Casino. The casino recreates Christmas window displays during the holiday season that are inspired by scenes in the movie.

The Rock and Roll Hall of Fame draws thousands of music fans to Cleveland every month. Exhibits and artifacts honor some of the genre’s best-known performers and helps tell the story of how rock-and-roll rose to prominence. The Hall of Fame gives Cleveland residents opportunities to catch some of the most famous acts in the world and experience special events that celebrate music. There’s even a Rock and Roll Night School that provides insight into the history of rock music.

But the Hall of Fame isn’t the only place to rock out. Music fans will find live performances in more than 20 concert halls, bars and event centers in Cleveland. Among the most popular music venues is Beachland Ballroom & Tavern, The Winchester Music Hall, and Smedley’s Bar & Grill. Cleveland’s music scene was the starting ground for such bands as Bone Thugs-n-Harmony, Nine Inch Nails, Filter and Dazz Band, to name a few.