5 Reasons Millennials Are Falling in Love With Cleveland

Cleveland’s transformation has led to a wave of new, young residents. Here’s why you might want to join the crowd. 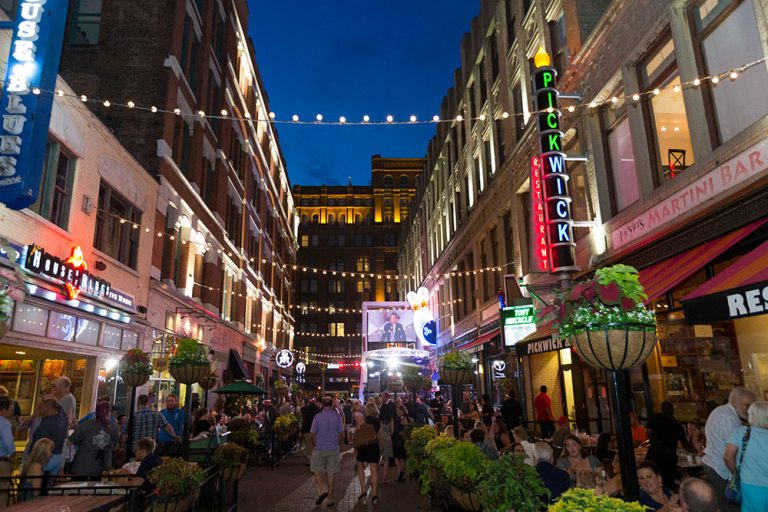 Clevelanders tend to be shy about bragging about their own city. Perhaps that comes from their humble Midwestern sensibility. Or it could be from the city’s long history of being cast as part of the Rust Belt – and that whole “river that caught on fireâ€ thing, which earned C-Town the regrettable nickname “Mistake on the Lake.” Yeah, that might be it.

But in recent years Cleveland has undergone a transformation, shedding some of the less flattering connotations of its past and capitalizing on its long list of positive features.

And make no mistake: millennials are taking notice.

Between 2000 and 2015, according to the Downtown Cleveland Alliance, C-Town’s population grew by 77 percent. Millennials happened to be the largest group among those moving in. City center residents are up to 15,000 as of 2017, and those numbers are expected to keep rising.

Considering making the move to Cleveland yourself? Here are the top five reasons millennials are moving to Cleveland – and why you might want to join them.

Hugging Lake Erie with interstate I-90 running right through it, Cleveland’s downtown has an enviable lakeside view with eclectic neighborhoods stretching out from the main corridor. It’s the kind of Midwest city that’s big enough to earn its cosmopolitan reputation, while still retaining its amiable heartland characteristics – the same vibe that nearly convinced Liz Lemon to shun NYC for Cleveland. Yet the city’s made significant strides since that 2007 cameo on “30 Rock.”

In the last two years the city has undergone a much-needed facelift, in large part centered around Public Square. The newly redesigned, 10-acre green space in the shadow of some of the city’s most iconic buildings has become a gathering place for visitors and locals alike. The $50-million project took over 15 months to complete and is just one of the many construction projects dotting downtown. There’s a long list of other developments in commercial and residential real estate with a rolling number of residential apartment buildings opening up to meet the demand of new residents.

All this development makes it even easier to enjoy some of the city’s top cultural institutions, like the Cleveland Museum of Art (think of it as a smaller version of New York City’s Metropolitan Museum of Art – with free admission); Severance Hall, home of the city’s orchestra; MOCA Cleveland – the Museum of Contemporary Art that’s appropriate shaped like a shimmering cube; and, of course, the Rock & Roll Hall of Fame, which looks like a glass pyramid merging into the lake behind it. That’s not to mention the city’s burgeoning arts scene, which includes regular events around downtown.

Farm-to-table dining was ingrained in Cleveland long before it a national buzzword. It helps that Cleveland is surrounded by farm land, making fresh-picked crops more accessible than it might be in other cities.

Locals will steer you to the West Side Market, an indoor/outdoor market that dates back to 1912. Over 100 vendors sell everything from hand-stretched pastas to handmade beef jerky. The market garners frequent appearances on Food Network shows highlighting awesome foodie finds.

The Market is just one of many culinary hotspots located within Cleveland’s Ohio City neighborhood, which draws visitors to hometown hero Mitchell’s Ice Cream, housed in an old theater, and emerging favorites like Ohio City Provisions, which offers local meats, farm eggs and seasonal produce.

No doubt, part of the city’s food renaissance is thanks to James Beard Award-winning chefs, Michael Symon (of Iron Chef fame) and Jonathon Sawyer. Both have a familiar story that’s a common theme among local chefs – growing up in and around Cleveland: getting culinary training elsewhere, then coming back to the city to develop their own restaurant concepts. With more affordable rents than places like Chicago, San Francisco or NYC, Cleveland’s become the lucky recipient of a wealth of culinary creativity.

New concepts tend to open up on a regular basis, joining the already busy eateries around town. Take Larder: A Curated Delicatessen, started by three friends, including one who grew up in the area. Along with the restaurant, housed in a historic firehouse, they offer regular events and classes where you can “learn how to be a culinary badass.â€ Yes, please!

Cleveland is a lot greener than you think it is. Parks and natural preserves figuratively – and literally – ring the city. Locals call it the Emerald Necklace. For residents, that means you’re usually within walking (or biking) distance from a park or green space.

Take the 147-acre Edgewater Park: within the park there’s hiking, beaches, boat ramps, fishing, and for the adventurous, it’s become known as the place to go surfing (yes, surfing!). Kayaking along the Cuyahoga River is another favorite pastime among locals, who love telling newcomers it’s the same river that caught on fire and jumpstarted the creation of the Environmental Protection Agency. Today, the river has become a symbol of just how far the city has come to clean up its image – from the inside out.

Nearby Cuyahoga Valley National Park threads into the city and offers a quick daytime getaway to bike or hike along the trails.

4. Sports Are a Way of Life, But New Fans Are Welcome

Sure, NBA’s Cleveland Cavaliers may have lost LeBron James to the L.A. Lakers (although many diehard fans will tell you he’ll be back), but that doesn’t mean sports fans here have lost any of their enthusiasm for the city’s teams. Besides the Cavaliers, who took home the NBA championship in 2016, the Cleveland Indians professional baseball team regularly make it to the playoffs, and the Cleveland Browns, the professional football team known for having perfect seasons (meaning: no wins) has finally started scoring.

You don’t need to be a longtime resident to be accepted into C-Town’s fan base. There’s a come-as-you-are-attitude here that permeates everything, including the regular tailgating parties at local bars and other hangout spots, even when it’s not game day.

One of the city’s newer entries into the bar/entertainment scene is the Union Nightclub, which offers game-day promotions along with regular theme nights that include everything from Latin Nights to LGBT happy hours.

5. A Mix of Affordable Housing

From apartments to condos, houses to townhomes, Cleveland offers a variety of places to live that won’t bust your budget. Whether you’re looking to rent or own, residents here can take their pick of neighborhoods and housing options. For a quaint, quirky neighborhood quilted with cool restaurants, Clevelanders may suggest you check out the Tremont area. To be in the heart of the city’s cultural district, University Circle is the place to be. There’s a neighborhood suitable for just about any interest – and all within a quick drive or rapid transit ride to downtown offices.

In addition to affordability, Cleveland also offers amazing job opportunities – it’s no coincidence the city made our recent lists of great cities for job seekers. Between the reasonable home prices and quality job opportunities, a high quality of life is truly accessible here.

So what are you waiting for?