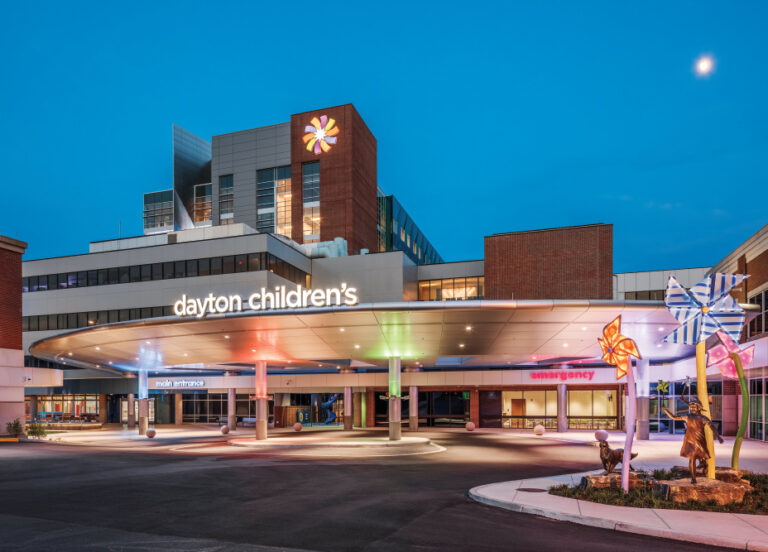 When it comes to health care in Dayton, the region delivers. The region is home to one of the nation’s best children’s hospitals, the location of a veteran’s hospital founded in 1867 and the address of major medical facilities associated with two innovative and growing health care systems.

Dedicated to the relentless pursuit of optimal health for every child within its reach is the mission of the 181-bed Dayton Children’s Hospital, which offers more than 45 specialties and is rated by U.S. News & World Report as one of the top pediatric care centers in the country. During 2021, it recorded nearly 400,000 patient visits.

The 10th-largest employer in the region, the hospital is devoted to the well-being of children, including their physical and mental health. A $5 million gift – one of the largest in the hospital’s history – from the Connor Group, a real estate investment firm based in Ohio, is the spark behind a dynamic new partnership between Dayton Children’s and the company.

Dayton Entrepreneurs Find Support to Build Their Futures at The Arcade

Their collaboration will create an innovative model to integrate behavioral health care into a pediatrician’s well-child visit and could become a national model for preventing mental health crises. It is administered at the Connor Child Health Pavilion on the eastern edge of Dayton Children’s main campus.

“Our children are in crisis – we are sadly seeing far too many teenagers who want to end their own lives,” says Deborah Feldman, president and CEO of Dayton Children’s. “We need to get upstream of behavioral concerns in children, by providing support and coping mechanisms earlier and avoiding a crisis later.”

“We need to get upstream of behavioral concerns in children, by providing support and coping mechanisms earlier and avoiding a crisis later.”

The program will provide counseling, psychological and psychiatric services to an estimated 4,000 children during well-child visits, intensive outpatient therapy to an additional 1,400 young people, as well as parent education and community-based resources to more than 5,000 families.

Also, a psychology fellowship and research project are being established to train and inform the next generation of caregivers.

The Cincinnati Shriners Hospital recently relocated to Dayton Children’s but operates as a separate facility while continuing to provide regional access to burn care and reconstructive surgery to children.

Based in Dayton, Premier Health offers five award-winning medical centers including the 990-bed Miami Valley Hospital. This is the city’s largest medical facility served by 6,200 employees, 1,350 physicians and the location of the region’s only adult Level I trauma center. Their four CareFlight helicopters are an extension of the trauma center and recently became the only air service in Ohio equipped to carry whole blood, meaning life-saving blood transfusions can happen on scene.

The helicopters are the fastest in the region, traveling up to 180 miles per hour and cover a 150-mile radius with the ability to carry two patients. Premier Health also provides seven emergency departments, eight urgent care sites, and more than 130 outpatient locations affiliated with primary care and specialty physician offices.

Get outside and explore at these destinations in the Dayton area.

It is an exciting time in the history of Kettering Health, a nonprofit, faith-based health care system of medical centers, emergency centers and outpatient facilities, all united behind a promise to guide every person to their best health.

It is home to over 14,000 employees, 1,800 physicians, 120 outpatient locations and Kettering College, a fully accredited college that specializes in health science. The system continues to grow and opened a new medical center in Springfield. Kettering Health also announced plans for a new facility in Wilmington, which will include a 24/7 emergency center as well as family medicine and specialty physicians.

One of three original VA facilities nationwide, the Dayton VA Medical Center remains guided by the needs of service members, their families and caregivers in Ohio and eastern Indiana. It provides a full spectrum of services including top-rated primary care, veteran-centric mental health programs plus meeting the needs of LGBTQ+ and women veterans.