Dayton Entrepreneurs Find Support to Build Their Futures at The Arcade 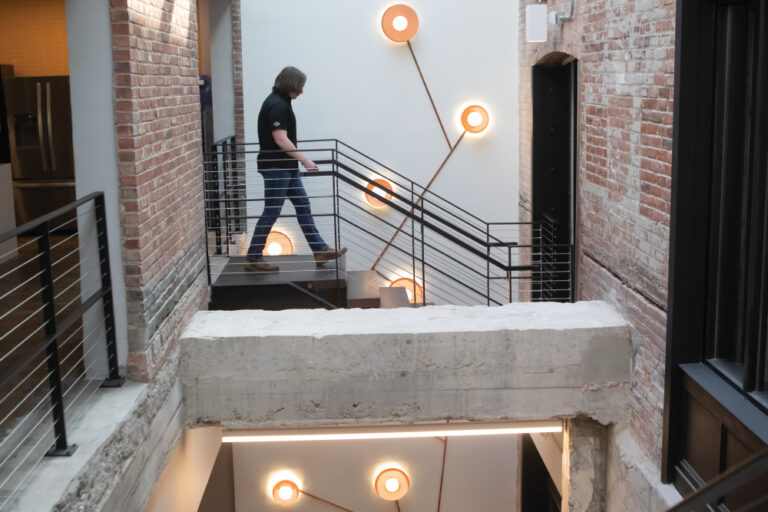 At the turn of the 20th century, Dayton was quickly becoming a seat of innovation. From dreamers who forged an “incorruptible cashier” system to a pair of weirdos who ran a bicycle shop and thought themselves engineers enough to champion human flight, the Gem City was churning out ideas and patents that would rival today’s Silicon Valley.

At the center of the city stood a testament to that ingenious endeavor. Dayton Arcade, which began construction in 1902 and opened in 1904, was meant to provide a marketplace for the city. Aft er being mothballed for more than 30 years, the Arcade is back and fostering a different marketplace – one of ideas.

Why the University of Dayton Supports Entrepreneurship

“We’re proud to be named for this city.”

The University of Dayton (UD) and the Entrepreneurs’ Center (with the Miami Valley Small Business Development Center) stepped up to sign the first 10-year deal. Their commitment helped the project pull in more than $100 million in its capital stack, kicking off one of the most ambitious redevelopment projects in the state.

In its role at the Arcade, EC formed a joint venture with UD’s Crotty Center for Entrepreneurial Leadership to form The Hub Powered by PNC Bank at the Dayton Arcade, creating the largest university-anchored innovation hub in the country.

“The EC has been instrumental in fostering strategic partnerships that benefi t entrepreneurs, students and the community, including the opening of Kable Academy’s fi rst Dayton-area classroom off ering ‘live’ instructor-based tech training in web development and cybersecurity,” Koorndyk says.

Co-locating tech startups, UD students, arts organizations like The Contemporary gallery, and myriad other small businesses that choose to put down roots at The Entrepreneurs Arcade creates opportunities for “collision,” or purposeful, interdisciplinary interactions.

Sinclair College, one of the longest-running community colleges in the country, also has a presence at The Arcade.

Koorndyk says this type of incubator is a unique asset for startups.

“Entrepreneurs have access to an abundance of centralized resources, as well as hybrid workspaces designed to foster organic relationships with other startups and small businesses, enabling support and encouragement,” he says.

“The Hub at The Arcade is a central gathering place for the entrepreneur community. All entrepreneurs are welcome here – when you walk through the door, someone can connect you to the correct person to help you move your business forward,” says Audrey Ingram, marketing manager who works for Parallax Advanced Research, one of the founders of the Launch Dayton initiative.

Launch Dayton is a collaborative effort to connect entrepreneurs and business owners to peers, resources and supporters, and to tell the stories of the region’s thriving startup community.

“This community exists to support and inspire Daytonians who are starting and growing businesses,” Ingram says. “Launch Dayton partners believe everyone, regardless of their background, should have the opportunity to determine their own economic prosperity.”

From free, monthly LaunchPad events to the bootstrapping bonanza of Startup Week, Launch Dayton packs in programs targeting aspiring entrepreneurs as well as those already in the thick of mapping out their business. One thing in the works for this year’s Launch Dayton Startup Week is an art-food-tech fest that will be open to the public.

Now just a couple decades into the new century, Dayton once again is pinning its future to those with the audacity to dream.

“Creating new businesses and attracting and retaining talent is vital to transforming the urban core,” Koorndyk says. “We believe collaboration is the key to success.”