Ohio may be one of the most underrated — and misunderstood — states in the country. We got a local to dole out some real talk. 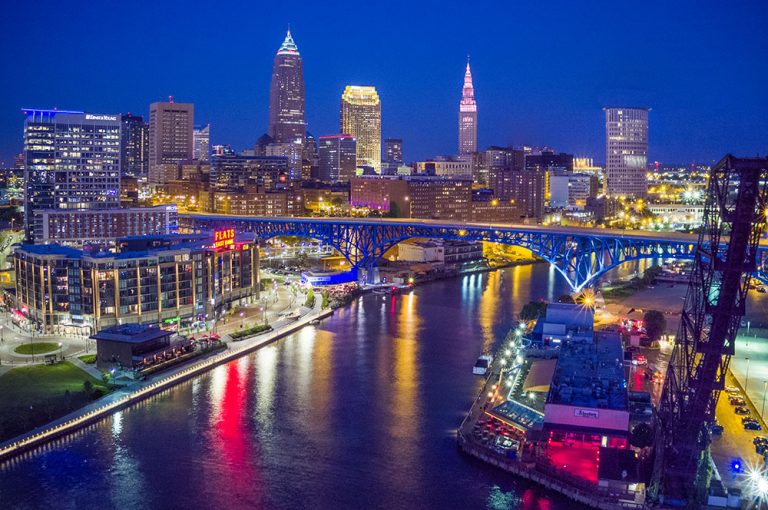 A little over a year ago, I packed up my 400-square-foot apartment in Santa Barbara, CA, made my way down the 101 for the last time, trekked over to Vegas for a night of gambling and then drove halfway across the country to move to my brand-new home: Toledo, OH.

Though leaving perfect weather and bike trips to the beach wasn’t easy (and I’ll admit, I did shed a tear when I left Hendry’s Beach for the last time), the allure of a better job for my husband and cheaper cost of living was too much for the sun and the surf to overcome. So, off to the winter tundra we went – where we traded in our flip flops for puffer jackets and Trader Joe’s for Kroger.

But moving to Ohio has been so much more than a seasonal wardrobe change. Let’s get real for a minute: I never expected that I would even like Ohio, much less grow to love this rugged, tough, unexpectedly beautiful, misunderstood, underdog of a state.

Here are some of the lessons I’ve learned about the buckeye state in my short time as a resident. And for those who may have misjudged this state – here are some reasons you may want to give it a second look…

Everyone has heard the trope that Midwesterners are nice, courteous and polite, and I am here to confirm that this is no exaggeration. Not only will friendly strangers chat with you while you’re in line at Home Goods or congratulate you on a find at the antique store, but they are also humble to a fault. If you try complimenting them, they’ll likely go into an explanation of how long it took them to accomplish this task, apologize for not doing it sooner or tell you that really, it’s not a big deal.

When you think of the Midwest, your mind doesn’t exactly conjure up an image of a sun-soaked island with people riding bikes and eating ice cream cones – but we actually have that here. During the spring, summer and fall months, you can visit islands like South Bass and Kelleys off the coast of Lake Erie for swimming, boating, shopping and beach parties. You can visit the islands by hopping on a ferry with your car, or leaving it behind to explore the scenery by bike or golf cart. Island life in Ohio? It’s a thing.

It is a truth universally acknowledged that an Ohio resident in possession of a nice, spring day must be in want of an amusement park. More specifically, Ohioans love to visit Cedar Point (AKA The Roller Coaster Capital of the World). Cedar Point is a point of pride for Ohioans – and rightfully so.

Located in Sandusky, right on the coast of Lake Erie, Cedar Point is one of the oldest theme parks in the country and has a record-breaking 71 rides, including 18 world-class roller coasters. In addition to park thrills, you can also visit Cedar Point’s beach, dine at their upscale harbor restaurants and catch a live show at the park.

If you’re visiting Ohio and looking for a bite to eat, it’s likely that you’re going to come across a hot dog place or two in your search. Because Ohio has large Polish, Hungarian and German populations, there are hot dogs and sausages galore for the carnivores out there.

Whether you’re looking to grab a dog from the famous Tony Packo’s in Toledo (where celebrities literally come in and sign hot dog buns), Dirty Frank’s in Columbus or Happy Dog in Cleveland, you can’t go wrong – especially if you add a little chili.

5 Reasons Millennials Are Falling in Love With Cleveland

Just because Ohio is known for hot dogs and chili doesn’t mean we don’t know true culinary genius. There is no shortage of restaurants throughout Ohio with innovative chefs, playful menus and incredible food, including The Pearl in Columbus (try the Ricotta dumplings), Kengo Sushi & Yakitori in Toledo (you haven’t lived until you’ve tried the porkbelly on the Yakitori menu) and Orchids in Cincinnati (which was named one of the 15 Best Restaurants in Ohio). Ohio has truly become a dining destination that the rest of the country is finally discovering.

6. The beer here is top shelf.

It’s no secret that Midwesterners love a good beer, but coming from California where IPA is king and there’s a famous brewery on every corner, I thought it would be tough to adjust to a new brew scene. I’ve never been so thankful to be wrong.

As of July 2018, Ohio has about 251 breweries in the state – all with a wide variety of ambers, porters, IPAs, pilsners and everything in between. Some state favorites include Rhinegeist in Cincinnati, Great Lakes Brewing in Cleveland, Kindred Brewing in Columbus, Black Cloister in Toledo and Warped Wing in Dayton.

Ohioans may pride themselves on their ability to handle the winter, and it’s not surprising to see midwestern dads wearing shorts in 25-degree weather, but we also like a chance to escape the cold. And where do we like to go to do this? Florida.

Whether you fancy Orlando, Miami or Tampa, there is a bounty of cheap, direct flights from Ohio airports to the warm Florida sunshine in case you need a break from the three (or let’s face it, five) months of snow.

8. The arts are taken very seriously.

Ohio may not be New York City or Los Angeles, but that doesn’t mean we don’t appreciate thought-provoking and moving art – whether it be on the canvas, on stage or in glass. Some of the country’s best art museums are located in Ohio, including the Toledo Museum of Art (which houses a collection of more than 30,000 pieces). Ohio also has bragging rights to the Cleveland Orchestra, which is considered to be one of the world’s best symphonies.

9. Football is a religion.

Football is nearly inescapable in the fall, and most Ohioans root for their Buckeyes each and every Saturday. If you aren’t an Ohio State fan, it’s probably best to not cheer too loudly against them. It’s quite literally the only thing Ohioans might not be polite about.

Okay, yes. It’s very cold in Ohio. And while this isn’t a surprising thing about living in Ohio, what you should know is this: Stocking up on winter gear is a cultural activity. Score a deal on a parka in the middle of a summer tent sale, and you’re an Ohio hero. Be able to walk outside with minimal layers (because your fill power is high), and you can go outside and shovel the sidewalk like an absolute boss.