Looking for the best place to raise a family in Ohio? These small towns and cities around the state are gems waiting to be discovered. 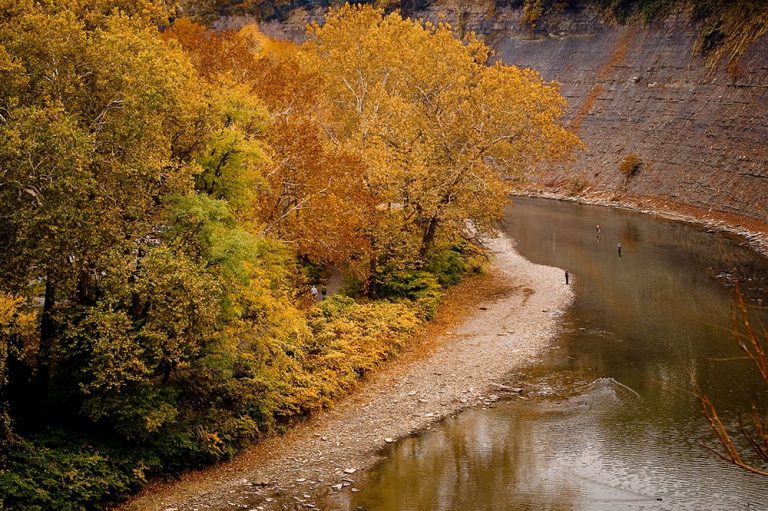 Rocky River / Courtesy of Joshua Rothhaas under a CC 2.0 license.

Ohio has recently shed its Rust Belt past and emerged as a state that is rich in cultural draws and natural wonders, all while offering a growing economy and affordable homes for families.

Although Ohio falls within the top ten states in the country in population (#7 at 11.7 million) and GDP (it’s #7), this larger-than-life state has at its heart a small-town sensibility when it comes to the communities that make it a great place to live – and raise kids.

Best Places to Live in Ohio

A past slogan that perfectly captures Ohio’s vibe? “The Heart of It All.â€ In many ways, Ohio does feel like it lies in the center of things: Politically, Ohio is a swing state that was also home to eight U.S. presidents. Geographically, the state sits halfway between New York and Chicago – and has easy access to other Midwest, Eastern and Southern states (good for commerce and good for inexpensive family vacations). It’s also dotted with more than 70 state parks and the Cuyahoga Valley National Park, which threads right into the greater Cleveland area. The state’s diverse array of towns and communities allow residents to choose your own customized neighborhood for your family.

This city of 20,000 may just be Cleveland’s best-kept secret when it comes to family-friendly communities. Rocky River is an easy 20-minute commute into Cleveland – meaning it’s far enough away to feel like a distinct town of its own, but close enough you can get into work quickly. Even better, it’s on the banks of Lake Erie and Rocky River, which many families here take advantage of by going to the lakeside beach areas, kayaking and other outdoor activities, especially at Rocky River Park.

This year Cleveland magazine, in its annual review of area suburbs, awarded the city top honors, noting, “This year’s No. 1 suburb charms us with reliable schools, a hot housing market and a small-town feel.â€ The homey suburb also holds regular community events, like the River Days in the summer.

These Are the 10 Best Cities to Raise a Family in the U.S.

Tucked in the northwestern corner of the state, in a suburb of Toledo, Perrysburg came in first in WalletHub’s top places to raise a family in Ohio. The overall ranking included benchmarks in Family Life & Fun, Education, Health & Safety and Affordability. Perrysburg has a population of just over 21,000 and a median home price of $191,600 and schools ranking 8/10 and up from GreatSchools.org.

Just as important, Perrysburg, which lies on the picturesque Maumee River, holds regular community activities. Your family, though, might want to escape to nearby Maumee Bay State Park along the shores of Lake Erie or to Cedar Point amusement park, known as the roller coaster capital of the world.

According to U.S. News & World Report, several Cincinnati-area schools rank as some of the top in the state, including Wyoming High School, which came in at #2. Ninety-three percent of students at the high school participate in AP courses (with 88% passing their exams!). GreatSchools.org gives Wyoming’s schools rankings of eight out of ten or higher.

The small, 2.87-square miles community within easy commuting distance from Cincinnati, has only 8,400+ residents. There’s plentiful outdoor finds in Wyoming for families, like the Trillium Trails Wildflower Preserve, Winton Woods, and Sharon Woods.

The state’s capital, Columbus, is having a moment – it regularly tops a variety of best city lists: Money magazine’s 6 Best Big Cities, and Livability deemed it the perfect place for creatives and makers. No wonder suburbs circle the city that offer top-notch schools for those working in nearby Columbus.

One of those suburbs is Pickerington, southeast of Columbus, which garnered a #2 slot in NerdWallet.com’s list of Best Cities for Young Families in Ohio, pointing out that “40% of households are married couples with children, which is the highest mark in the state.â€ Median home prices of $182,700 make it easier for families to afford homes here. The Pickerington School District boasts a four-year graduation rate of 96.7%, and a five-year graduation rate of 98.7%. Around 50% of students participate in AP courses.

Why Columbus, Ohio, Is the Perfect Place For Creatives And Makers

Full disclosure, our family used to live in Solon – and we chose the community for the same reason many families do: its award-winning schools. The school district consistently ranks as one of the top in the region, and the state, including Cleveland magazine’s annual rating the suburbs list, where they pointed out its been one of the best for “more than a decade.â€ It topped Niche’s 2019 best school district list, too, coming in at #2 (it was #1 in Ohio). The top schools do come at a cost – median home prices here are $266,400.

The community includes several family-friendly perks, such as a large recreation center, including an outdoor pool complex, and a thriving community arts scene thanks in part to the Solon Center for the Arts, which provides regular programs and performances for children. Add to that the fact that it’s centrally located in northeast Ohio, providing easy access to nearby Cleveland or Akron, and you’ve got the formula for a perfect place to raise a family.