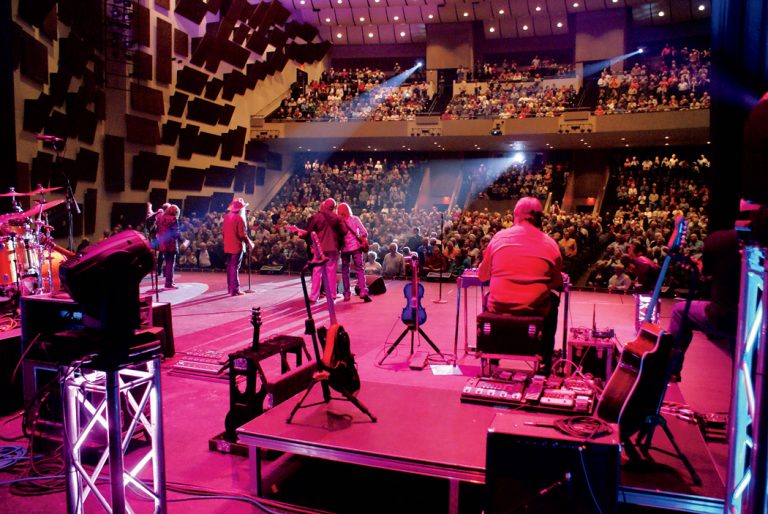 Broken Arrow has long enjoyed a thriving arts scene, with many talented citizens, a community playhouse and a strong arts program in Broken Arrow Public Schools. But over the last few years, the community’s arts scene has received national recognition, thanks to the 2009 opening of the stellar Broken Arrow Performing Arts Center.

The $30 million facility was built to be the official location for Broken Arrow Public Schools’ fine arts programs, but it has evolved into much more. It hosts more than 200 events every year, from school musicals to Broadway shows and Grammy Award-winning artists.

“We’re now in our seventh season, and it’s been awesome to watch it grow. We’re very proud of it,” Frie says. “I am my own worst critic, but I have to say that coming in we had a five-year and 10-year plan, and we’re already way ahead of where I thought we would be.”

A native of Jenks, Okla., Frie spent more than 20 years as a professional actor and singer in New York before he moved to Broken Arrow to oversee the Performing Arts Center.

“I was ready to come back home,” he says. “And I was thrilled to have this opportunity.”

One of Broken Arrow High School’s most famous alumnae, actress and singer Kristin Chenoweth has also been instrumental in the facility’s success. A 1986 graduate of Broken Arrow High School, Chenoweth has achieved international fame with her work in television, movies, Broadway and music. She won a Tony Award for her role as Sally Brown in the Broadway musical “You’re A Good Man, Charlie Brown,” and she originated the role of Glinda in the popular musical “Wicked,” acting opposite Idina Menzel.

The Broken Arrow Performing Arts Center honored Chenoweth’s accomplishments in 2012 with the naming of The Kristin Chenoweth Theatre, for which she returned to Broken Arrow for a special concert. Since then, she has formed a partnership with the center, offering an annual master class to teach aspiring young artists to perform in front of a live audience and a Broadway Boot Camp for students in June. The first master class drew more than 1,100 people. And more than 300 students auditioned for the first Broadway Boot Camp,from whom 40 were selected.

Chenoweth has always been filled with Broken Arrow pride, and says she wants to give kids in her home town opportunities she didn’t have at their age. In November 2014, she released her first live CD, Coming Home, which she chose to record in front of an enthusiastic audience at the Broken Arrow Performing Arts Center. PBS aired the concert on television later that month.

“I’m so excited to partner with the Broken Arrow Performing Arts Center and help raise awareness about the city I call home,” Chenoweth says. “Giving back to the community is a privilege, and I feel most fortunate to be able to support educational and artistic opportunities in Broken Arrow. It also means I get to come home, sweet home, a heck of a lot more.”

The 2015-2016 season at the Broken Arrow Performing Arts Center is full of crowd-pleasers, including Broadway’s Joseph and the Amazing Technicolor Dreamcoat, Liza Minnelli, Ragtime: The Musical, The Ten Tenors’ Home for the Holidays, Million Dollar Quartet and Bernadette Peters. For more information, visit www.thepacba.com.