Get Fired Up for Fine Dining in Broken Arrow

A new restaurant raises the steaks when it comes to local gourmet fare. 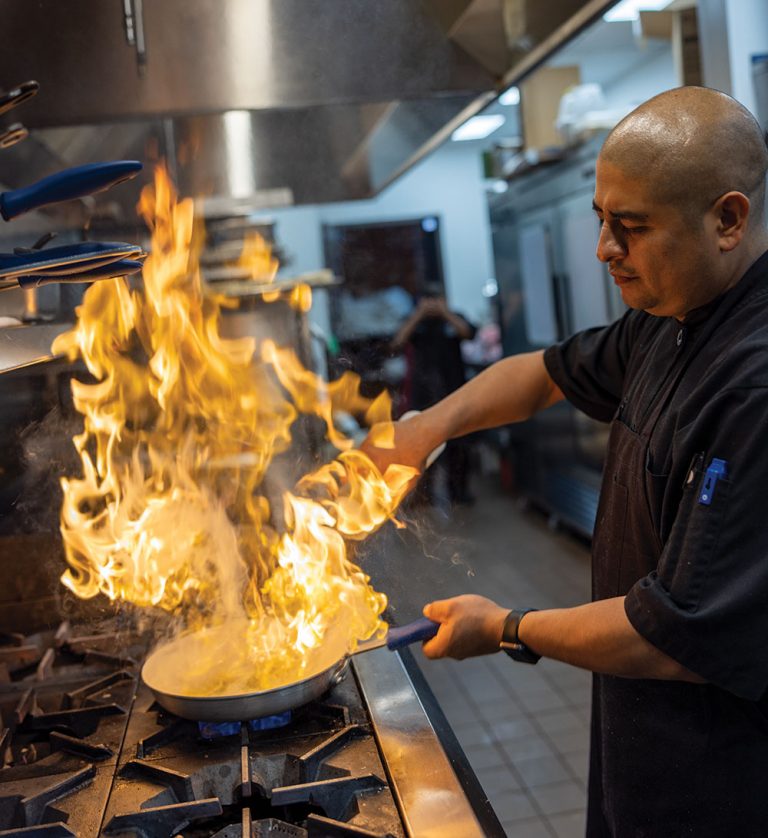 A mere 20 minutes from the heart of Tulsa, Broken Arrow checks all the boxes of a quintessential village.

Even though it has retained the vestiges of small-town charm, business is booming in the quaint community: Restaurants and new businesses are popping up on a regular basis, and local industries continue to fare well. And, since Oklahomans know how to appreciate a good cut of meat cooked just right, the new steakhouse in Broken Arrow is also maintaining its success.

As 2020 was coming to a close, Joe Garrett opened the doors to his new restaurant, the Rustic Chophouse. Garrett, who moved to Broken Arrow about seven years ago, never planned on opening a restaurant, though he certainly earned his fair share of service experience working as a beverage manager at a local country club.

“I befriended a lot of the club members,” he says. “We’d play golf and go to this restaurant in Scottsdale, Arizona, called Mastro’s Ocean Club. One night we were there, and I thought, ‘Broken Arrow really needs a steakhouse.’”

Some of those members became Garrett’s close friends, and with their business experience and an agreement that Garrett would be the face of the operation, set a plan into motion to bring a new concept to fine dining in Broken Arrow.

“I wanted something that’s fine dining, not with dress codes but with the food. I want people to be comfortable and relaxed; to have a place where you don’t have to travel to downtown Tulsa for a nice restaurant experience. We just let the food do the talking and showcase who we are.”

“We ran into a spot right in the heart of Broken Arrow’s Rose District – this up-and-coming, Hallmark-y, small-town vibe,” he says. “It sort of fell into our lap.”

Once construction began, it became clear that in addition to the normal obstacles of opening a restaurant, trying to do so during a global pandemic made the process almost impossible.

“Materials were everywhere, prices were constantly up and down, everything was backordered,” he says. “We were hoping to open in October of 2020 but eventually opened in December. Even still, staffing is an issue and food costs have gone up.”

Nevertheless, the steakhouse in Broken Arrow opened nearly a year ago now and business has been thriving.

Rustic Chophouse is all about authenticity and simplicity. The building’s history is on display via photos and exposed original brick from 1904. The menu isn’t pretentious or overbearing, just high-quality, locally sourced beef, seafood and various accoutrements.

And there’s also something to be said about Garrett’s humility. He recalls several “eye-opening” experiences, including learning the business end of owning a restaurant.

“It’s more difficult than you think,” he says. “But it’s very rewarding when people say, ‘That was the best steak.’ You don’t get in this business to make a ton of money. You have to really love what you do. But the rewarding part is worth it.”

Garrett largely credits this success to a dedicated staff. “I have an incredible crew,” he says, using executive chef Rigo Vazquez and assistant general manager Aaron Martinez as examples.

“Everyone likes being here, but I’m not afraid to jump in and do dishes, run food, be the host, answer the phone,” he says. “When your staff is happy, your whole restaurant flows.”

It also helps that the city of Broken Arrow made opening relatively easy, and surrounding businesses welcomed it with open arms.

Broken Arrow Is Focused on the Future

Residents benefit from a wealth of new developments fueled by public/private partnerships.

As for the future, Garrett’s keeping one eye on the state of the world and one on a few prospective projects. “I’d love to have a speakeasy with live music,” he says, hoping it can be located in the Rose District. “Little advertising, no food – just handcrafted cocktails, and quality wine and spirits.”

Whatever it is that’s in store for Garrett, he plans to keep it local. “I’d love to have three to five restaurants in the next 10 years,” he says.

But for the speakeasy, in particular, one thing’s for sure: It will be in Broken Arrow. “I love this town,” Garrett says. “Whatever I can do for it, I want to.”