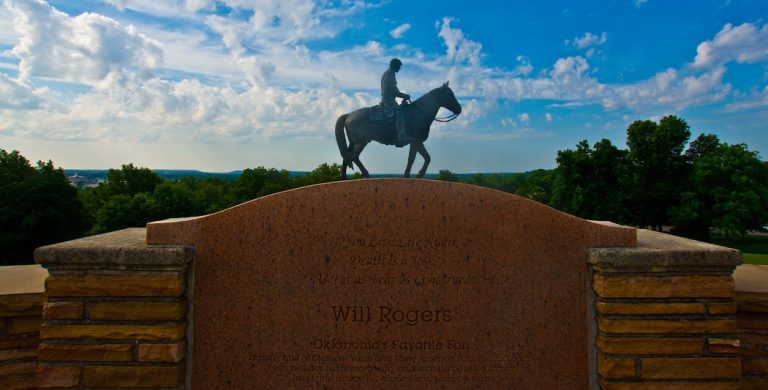 Claremore / Courtesy of Jon Bocox under a CC 4.0 license.

Best known as the home of entertainer Will Rogers, Claremore is the county seat of Rogers County and the setting for the Rodgers and Hammerstein musical Oklahoma! A good transportation system is in place with Interstate 44 and three state highways, meaning it’ll be an easy commute to one of the area’s eight major employers.

Founded in 1909, Rogers State University has about 2,700 students at its Claremore campus, and there are satellite campuses in Bartlesville and Pryor Creek. RSU began offering full four-year bachelor’s degrees in 2000 and has a nationally recognized distance-learning program.

More than 700 employees work for the Claremore Independent School District, which has six schools that all rank high in Oklahoma academics. The schools are Catalayah, Claremont, Roosa and Westside elementary schools as well as Will Rogers Junior High and Claremore High School.

Drilling for oil and natural gas is the specialty of Baker Hughes, a company known for its groundbreaking innovations in the petroleum industry. The company has advisory teams in markets throughout the world, including oil-rich areas like Russia, Saudi Arabia and even the North Sea.

Many residents of Claremore work at the Tulsa Port of Catoosa, which features a 2,000-acre industrial park that hosts 72 companies. The port provides an economic impact of $300 million annually to Oklahoma, and bulk freight items shipped to-and-from Catoosa include agriculture products, fertilizers, petroleum, steel and various consumer goods.

Owned by the Cherokee Nation, Cherokee Casino Will Rogers Downs is a gaming facility and horse racing track in Claremore. A total of 250 electronic gaming machines make up the casino section, while quarter horse races occur from September through November, and thoroughbred racing is from March through May.

A total of 80 rooms highlight the new Hampton Inn & Suites Claremore off Highway 66 and within walking distance of the new Claremore Conference Center. Amenities at the hotel include an indoor pool and spa, exercise facility and free Wi-Fi.

A Main Street Oklahoma community, historic downtown Claremore is a picturesque district with more than 50 antique shops and specialty stores as well as independent restaurants and office buildings. Also available to residents are two apartment complexes and a senior housing facility.