Get your feet wet at one (or all!) of Oregon's most breathtaking waterfalls. 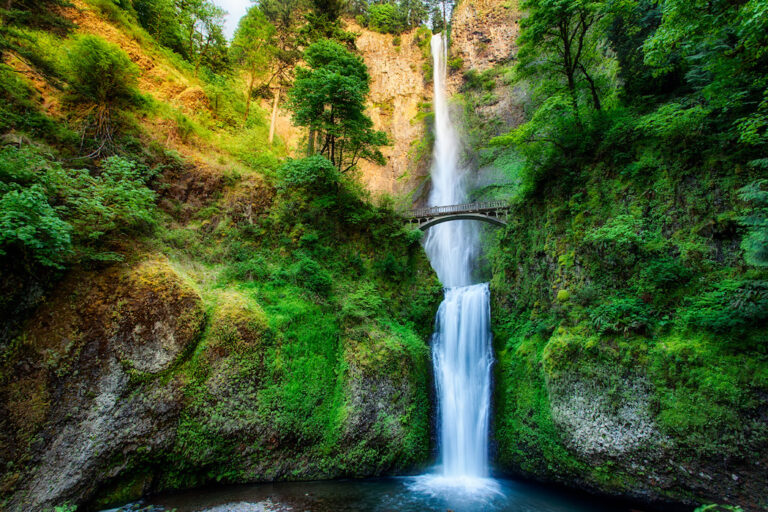 Oregon / Courtesy of Michael Matti under a CC 4.0 license.

Oregon is chock-full of mountains and rivers, which help create some of the most stunning waterfalls in the US. Whether you’re kicking back at the Columbia River Gorge or waterfall hunting in southern Oregon, we guarantee you won’t be disappointed. Pack your bags and book your ticket for a peek at these eight glorious waterfalls.

These perfect falls surge down a 97-foot drop in Marion County. Its basaltic bedrock allows for various forms of mosses and lichens to grow freely along the walls, staining one section (as seen above) bright orange. Previous visitors to Abiqua Falls warn that the hike, and the road to get there, are super rough—but they’re so worth it.

This waterfall is much more family-friendly, with an easy 2.2-mile hike leading waterfall lovers on a trail with four tiered cascades. The falls range in height from 10 to 30 feet, with the gorgeous Sweet Creek Falls saved for last. Get your feet wet in the small pools off the trail or opt for a float on the Siuslaw River for a true lazy river experience.

These falls were named because it kind of looks like—you guessed it—a punch bowl. Its unique deep bowl and rock formations that faintly resemble a ladle have made the falls entirely responsible for the term “punchbowl” when used to describe other waterfalls. Fed by Eagle Creek, the 36-foot falls may not be super tall, but many people consider it to be one of the most photographed waterfalls in the Pacific Northwest because of its sheer beauty.

If you’re looking for something a little bigger, look no farther than Multnomah Falls. At a whopping 542 feet, the upper falls scored the title as Oregon’s tallest waterfall, with a smaller drop right below it at 69 feet. Because of its height, the United States Forest Systems have dubbed it the second tallest year-round waterfall in America. A picturesque trail brings visitors to a 105-foot high footbridge allowing for optimal views of both falls.

Ready to move? Here are the 5 cheapest cities in Oregon

Toketee is the Chinook word for “graceful,” and we’d have to agree that this is the perfect name for these falls. Toketee Falls gracefully flows in two tiers with deep blue pools at the bottom of each, adding up to a total height of 113 feet. The falls are now regulated by a dam upstream, creating extremely consistent viewing opportunities at all times of the year.

Located along the Columbia River Gorge, this gorgeous waterfall is called Horsetail Falls because of its twisty shape that (kind of) resembles a horse tail. Take a gander at its unique shape from viewing points at 180 degrees around the 176-foot tall cascade, and don’t miss Ponytail Falls, its 88-foot upper falls.

The 8 Most Stunning Waterfalls in Tennessee

This thundering waterfall is considered one of the most powerful in all of Oregon’s Columbia River Gorge. The two-tiered falls total 350 feet and plunge into a massive pool. As you traverse the trail to the falls, you’ll see giant boulders left over from a landslide in 1973, and if you happen to be visiting in the late fall, keep your eyes peeled for spawning salmon at the base of the falls.

Located near Bend, Oregon, this plunge-type waterfall drops 89 feet and has become a favorite spot for locals and visitors alike. The area surrounding the falls was devastated during a rampant forest fire in 1979, but is quickly restoring itself to its pre-fire beauty. Tumalo Falls is super accessible, with great views of the powerful falls located just 50 feet from the parking lot.