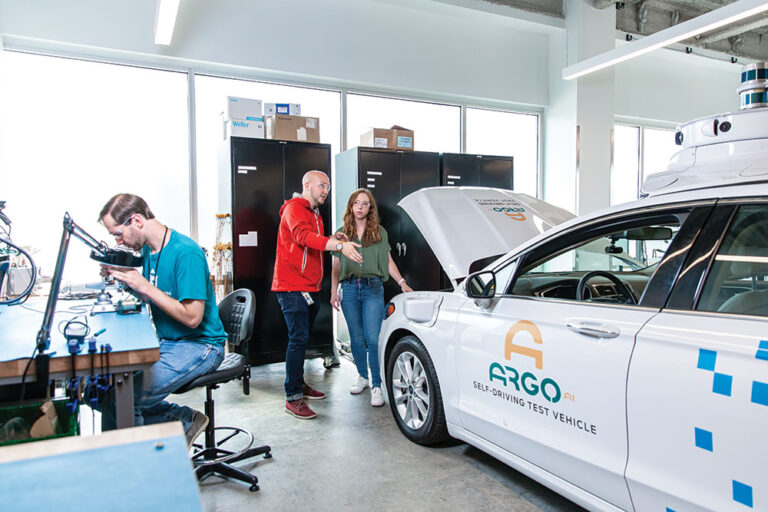 A modern-day industrial revolution is taking place in Pennsylvania, and shaping the future are impressive advances in artificial intelligence (AI). Pennsylvania has established itself as a leader in a number of AI industries, including software, robotics and machine learning.>

Global tech giants, including Amazon, Google, Zoom and Facebook, have invested billions of dollars in the state in recent years. Carnegie Mellon University (CMU), a private research university based in Pittsburgh, is a world-renowned leader in AI, taking a multidisciplinary approach to the broad and evolving field. Throughout the state, innovative companies are harnessing the power of AI, with York Exponential transforming South Central Pennsylvania into a cutting-edge robotics hub and Pittsburgh emerging as a hot spot for autonomous vehicle development.

A prime driver of AI innovation is the School of Computer Science at Carnegie Mellon, which has the top-rated AI undergraduate and graduate programs in the nation. At the institution, where AI was invented more than half a century ago, students work closely with faculty members to tackle the challenges of AI today and in the future, exploring topics that range from speech recognition to human-computer interaction.

Many of the school’s engineering departments have developed new graduate course offerings that cover AI and machine learning.

“We believe that AI can be used to create impactful solutions for society, and we have ongoing research in the ethical considerations of AI and their interface with engineering and technology,” says Shelley L. Anna, Carnegie Mellon associate dean for graduate and faculty affairs and strategic initiatives and a professor of chemical engineering.

In the College of Engineering, faculty has been hard at work developing courses at the Engineering AI interface in areas such as power and energy systems, information security and privacy, data processing systems, natural language processing, cognitive systems, computer vision and augmented and virtual reality, Anna says.

Pittsburgh has emerged as the epicenter for autonomous vehicle (AV) technology, aka self-driving cars â€” a technology developed decades ago by Carnegie Mellon’s robotics engineers.

Pittsburgh has drawn millions of dollars in investments from global technology companies, including Argo, Aptiv, Qualcomm and Aurora, which, in late 2020, acquired rideshare pioneer Uber’s Advanced Technologies Group. Uber launched a pilot fleet of autonomous vehicles in Pittsburgh a few years back and the Advanced Technologies Group worked out of a Pittsburgh office, where engineers developed self-driving technology.

The concentration of autonomous vehicle activity has also created new opportunities for other companies.

“We believe that AI can be used to create impactful solutions for society.”

When Argo AI, a self-driving technology platform company, was established in late 2016, the co-founders selected Pittsburgh as the company headquarters because of the diverse talent the city attracts from around the world, says Catherine Johnsmeyer, senior communications manager.

Argo AI co-founders also have deep ties and appreciation for Western Pennsylvania: Argo AI CEO Bryan Salesky is a graduate of the University of Pittsburgh, and both he and Argo AI President Pete Rander worked at the NREC at Carnegie Mellon’s Robotics Institute for several years.

Pittsburgh is also one of the half dozen cities developing Argo AI’s self-driving system. The company tests its technology in multiple cities to expose the system to a diverse set of complex scenarios. Pittsburgh, Johnsmeyer says, has steep and narrow streets, hills, railroad tracks, tunnels and bridges that help hone the self-driving system.

Carnegie Mellon University and Argo AI, in 2019, announced a five-year, $15 million sponsored research partnership under which the self-driving technology company will fund research into advanced perception and next-generation decision-making algorithms for autonomous vehicles.

“It’s an honor to support development of the next generation of leaders and help unlock the full potential of autonomous vehicle technology,” Salesky said at the time of the announcement. “CMU and now Argo AI are two big reasons why Pittsburgh will remain the center of the universe for self-driving technology.”