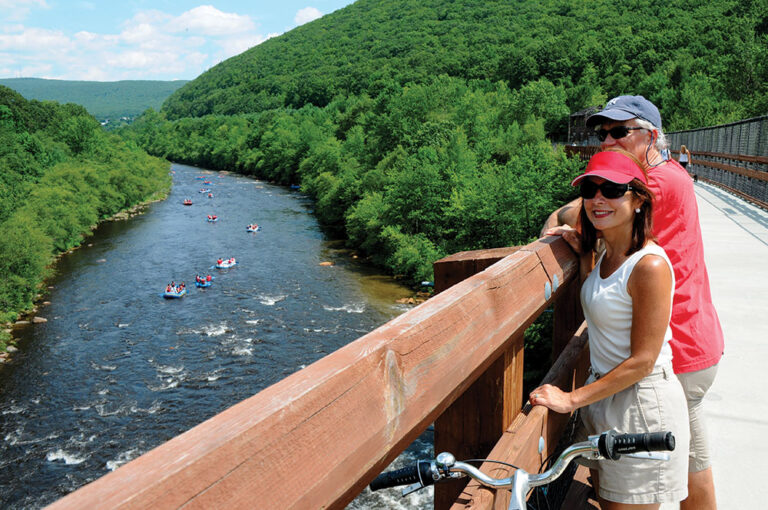 Pennsylvania offers so much natural beauty from border to border that it needs to be experienced on the ground“ or in the water.

With Philadelphia in the east and Pittsburgh to the west, the state offers plenty of big-city attractions and amenities. However, in the middle is a natural playground filled with mountains and valleys, lakes and rivers, and a lush landscape connecting it all.

This is the type of outdoor buffet served up all year long in Pennsylvania, from golf when it’s warm to ice skating and snow skiing in the winter months. And you don’t have to leave the city to enjoy the outdoors, since standout urban parks can be found throughout the state, such as the Capital Area Greenbelt in Harrisburg, Schenley Park in Pittsburgh and Fairmount Park in Philadelphia.

“Between Philadelphia and Pittsburgh, you have a lot of open space where you can get out and do plenty of fun things,” says Phil True, activities scheduler at Refreshing Mountain Retreat and Adventure Center, located in the Dutch Amish countryside of Lancaster County. “We have some of the best wilderness areas and preserved land in the country. And a lot of it is very accessible as public land.”

A sample of just about everything Pennsylvania has to offer in terms of the outdoors can be found at the various state parks (all 121 of them!), totaling more than 300,000 acres and spreading across 46,000 square miles (along with the 500,000-acre Allegheny National Forest).

“We have some of the best wilderness areas and preserved land in the country. And a lot of it is very accessible as public land.”

You can access Lake Erie from the sandy peninsula of Presque Isle State Park, enjoy the tree-covered beauty of the Pocono Mountains at more than a dozen state parks within its 2,400 square miles, or marvel at the picturesque combo of the Delaware River and Appalachian Mountains along the Delaware Water Gap.

“The Appalachian Mountain chain provides an almost unbroken belt of green through the eastern and central part of the state,” says Keith Fisher, director of conservation programs at The Nature Conservancy. “Then in the western part of the state, you have the Allegheny National Forest and the Pennsylvania Wilds, which is the most remote area of Pennsylvania, with more than 2 million acres of public land.”

No matter what part of Pennsylvania you are in, outdoor recreation opportunities abound. With more than 86,000 miles of rivers and streams flowing through the state, there are plenty of places for kayaking, rafting, paddleboarding, water skiing and fishing.

The Delaware River in the eastern part of the state is a designated wild and scenic river that Fisher says is “fantastic for fishing and kayaking.” In the middle, you’ll find the Susquehanna, the longest river on the East Coast. And the western part of the state is dominated by the Allegheny and Ohio and all their tributaries, with towering forests looming alongside the banks.

Meanwhile, hikers and bikers also have numerous options. The most famous is the 229-mile stretch of the Appalachian Trail that cuts through the state, but there are plenty of others. These include the 185-mile long Kittatinny Ridge (a premier birdwatching location), the 7.2-mile Falls Trail at Ricketts Glen State Park (which, true to its name, passes 22 waterfalls), and the 60-mile Schuylkill River Trail (with plans to eventually expand it into a 130-mile continuous route from Philadelphia to Pottstown).

Pennsylvania is a leader in the rails-to-trails movement, in which old rail corridors are repurposed into hiking and biking trails. Among the most popular ones in the state are the 150-mile Great Allegheny Passage, the Heritage Rail Trail, the D&L Lehigh Valley Trail, the Butler-Freeport Community Trail and the Allegheny River & Samuel Justus Trail.

“A lot of our towns were built around these railway systems, making it easy for people to travel direct routes from one town to another,” True says. “It’s free, it’s very accessible and it’s healthy. That’s something that’s really been on the rise around here.”

Adventure enthusiasts have plenty of choices, as well, including whitewater rafting on the Youghiogheny River, underground exploration at Crystal Cave or Lincoln Caverns, and rock climbing at Breakneck Rocks or Birdsboro Quarry. Refreshing Mountain offers several adventure experiences in one location, with three zipline courses, a 37-foot-tall climbing tower, and opportunities for paintball, archery and horseback riding.

But it’s the natural landscape of the magnificent middle where outdoor recreation in Pennsylvania truly shines.

More than 100 years before Pennsylvania became a state, officials in the area were already promoting environmental stewardship. In 1681, William Penn, founder of the British colony the Province of Pennsylvania, required land purchasers to preserve one acre of trees for every five acres of land cleared.

The Keystone State Has Found the Key to Success

Pennsylvania offers a wealth of advantages to attract investment and create jobs.

This began an environmental legacy that has continued for more than three centuries. It includes the creation of the first botanical garden in America by John Bartram in 1728 near Philadelphia; work done in the state in the early 1800s by famed naturalist John Audubon; Gifford Pinchot’s role in the early 1900s as the first head of the U.S. Forest Service before becoming governor of Pennsylvania; and the publication of the book “Silent Spring” by Pennsylvania native Rachel Carson in 1962, which is widely credited with sparking the growth of the modern environmental movement.

Moving to Pennsylvania? The toughest part is narrowing down your to-do list. Let us help.

Today, the state has cultivated a new generation of environmental stewards working to manage natural resources, preserve wilderness areas and protect the environment.

“Pennsylvania has a very strong land ethic,” says Keith Fisher, director of conservation programs at The Nature Conservancy. “There is a commitment to making public land available for outdoor recreation and for managing that land in an ecological manner.”