10 Things to Do in Charleston, SC

Looking for things to do in Charleston, SC? You can't miss these attractions. 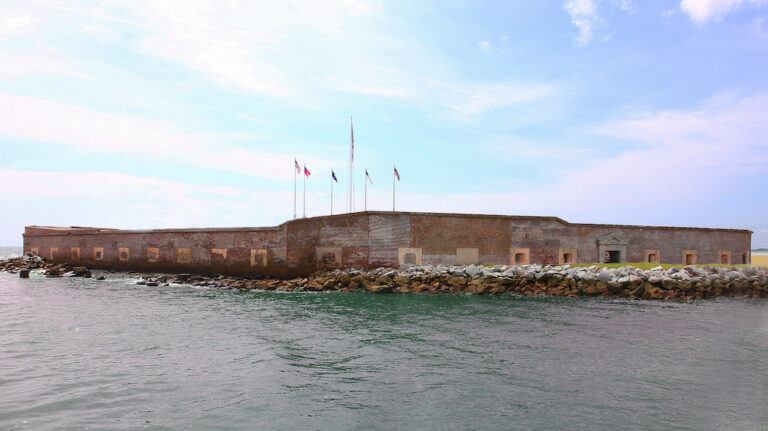 Charleston / Courtesy of Rennett Stowe under a CC 4.0 license.

Some 130,000 people live in Charleston, but more than four million visit the city annually—and for good reason. Between its history, scenery, good eats, and Southern charm, there’s no end of things to do when you visit Charleston.

A must-see for any Civil War buff, Fort Sumter (above) is where the war began. The site is free but only accessible by boat, meaning you’ll have to use your own or buy a ferry ticket to get there—but either way, it’s pretty common to spy dolphins on the ride over.

Built a few years before the Revolutionary War, The Exchange has served a variety of fascinating functions, ranging from a prisoner of war facility run by the British to the site where the South Carolina held its convention to ratify the Constitution. The Dungeon and Exchange have two separate tours—be sure to take both!

Twenty-five minutes from downtown Charleston, Isle of Palms is a great place to relax on the beach, sail, swim, golf, or windsurf. There are more than 50 beach-access points spread across the seven miles of shoreline, but be sure to get there early to snatch up a parking spot!

The Battery is probably the best green space in the city. Found along a defensive seawall lined with some of the most beautiful antebellum homes around, it’s a great place to watch the world go by. Sailboats drift past in the harbor, the Ashley and Cooper rivers babble by, and you can get views of Fort Sumter, Castle Pinckney, and the Sullivan Island Lighthouse. Plus, there are cannons and cannon balls sprinkled around that add an extra fun layer.

An aquarium seems like perhaps a pretty un-original option, but it’s always a great option for families. Plus, the South Carolina Aquarium does have something fairly unique: An albino alligator named Alabaster.

Had a hectic day? Take a sunset stroll across the Cooper River via the Ravenel Bridge—or wait until the sun goes down to be able to appreciate its beautiful lights. Fair warning: The full length of the bridge is two and a half miles—but even going a quarter of the way across lends itself to a nice evening.

Looking for a great half-day site? Magnolia is full of wild beauty. The Audubon Swamp Garden features gators, otters, and turtles; there’s a horticultural maze to get lost in; a petting zoo; a nice house to explore; and more.

A pristine example of antebellum architecture, the Aiken-Rhett House Museum has stood tall in Charleston since 1820. It features a self-guided audio tour through the house, slave quarters, stables, and kitchens, many of which are fitted with original wallpaper and furnishings. The Historic Charleston Foundation, which is in charge of the museum, took a conservation approach to the site, leaving much of it untouched—so don’t expect a shiny-new restoration.

The Hunley was the world’s first successful submarine. Built in 1864 for the Confederates, it actually managed to sink a Union ship—the USS Housatonic—with a torpedo. Of course, success is relative here—the submarine sank a total of three times, killing everyone onboard each time (including its namesake, Horace Lawson Hunley), before it was lost at sea. It was found again in 1995, and now can be visited at the Old Charleston Naval Base.