Enjoy the Outdoors in South Carolina

You won't have far to trek to enjoy outdoor rec in South Carolina. 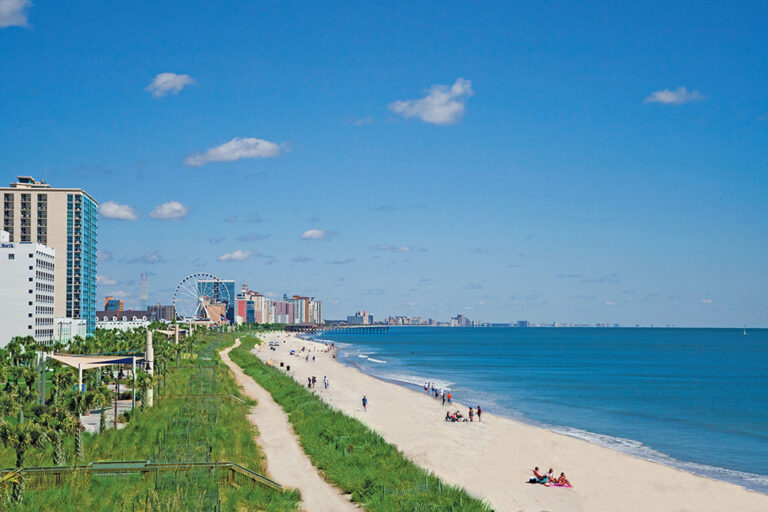 It is a mere 250 miles from the Atlantic Ocean port city of Charleston to Sassafras Mountain at the edge of the Appalachians. Barely a four-hour drive. But you can see numerous forests, lakes, rivers and waterfalls during that distance between sandy beaches and rocky outcrops. You will climb more than 3,500 feet in elevation and seemingly pass about the same number of golf courses. And most impressively, you will never leave the state of South Carolina.

This diverse natural landscape is one of the primary reasons South Carolina is an ideal place to explore the great outdoors. Within a three-day weekend, you can go scuba diving, mountain biking and whitewater rafting. And, once again, do some golfing.

Let’s begin at the water’s edge. South Carolina has 187 gorgeous miles of coastline, stretching from luxurious Hilton Head Island northward to the family-friendly vacation spot of Myrtle Beach. As a result, tourists and locals alike can engage in all manner of boating, kayaking, parasailing, swimming and, perhaps the most popular activity of all, lounging on the beach.

Farther inland, boating and fishing opportunities abound. The state has a collection of major lakes and reservoirs, including Fishing Creek Reservoir, Lake Hartwell and mountain spring-fed Lake Jocassee. Scattered throughout South Carolina are 47 state parks, comprising more than 90,000 acres of land, along with nine national parks, trails or historic sites.

Like the state itself, these parks provide a diverse range of attractions. Along with the pristine white-sand beaches, Hunting Island State Park is known for its historic lighthouse. The lighthouse was built in 1859 and rebuilt in 1875 following the Civil War.

On the opposite side of South Carolina, Table Rock State Park offers picturesque views from Pinnacle Mountain, which at 3,415 feet, is the tallest mountain located entirely within the state (Sassafras Mountain is partially in North Carolina).

In nearby Cleveland, thousands of migrating hawks and other raptors fly through Caesars Head State Park from September through November each year. Or, instead of watching, you can do the flying yourself (sort of) by taking a ride with Eagles Wings Hot Air Balloons in Rock Hill.

The numerous state parks are the literal stomping grounds for one of the most popular outdoor activities in South Carolina: hiking. Favorites include the 77-mile Foothills Trail near the North Carolina border (linking Table Rock with Oconee State Park), Paris Mountain State Park near Greenville (with 15 miles of trails spread across 1,540 acres), the 7,000-acre Croft State Park in Spartanburg, the 10,000-acre Mountain Bridge Wilderness Area in Cleveland, and the easy half-mile hike along the Chattooga River Trail in Sumter National Forest that leads to 50-foot high Spoonauger Falls.

Many of South Carolina’s hiking trails are also accessible to cyclists. In addition, there are several highly regarded mountain biking trails in the state, such as the Forks Area Trail System in the Sumter National Forest near North Augusta.

For road cyclists, Highway 11 has a 4-foot shoulder explicitly designed for bike riding. The Highway is also known as the Cherokee Foothills Scenic Highway. Other notable trails include the 425-mile-long Palmetto Trail, the Florence Rail Trail, the East Coast Greenway (which runs mainly along the Atlantic Coast north of Charleston), the Spanish Moss Rail Trail in Beaufort, the Doodle Trail in Pickens, and the 22-mile Swamp Rabbit Rail Trail in Greenville.

And then, of course, there is the golf. Miles and miles of glorious golf that’s laid out about 7,000 yards at a time. There are more than 350 golf courses throughout the state, nearly one for each day of the year, with approximately a quarter of them located in the Myrtle Beach area alone.

Highlights include Palmetto Golf Club in Aiken (which the club says is the oldest continually operated 18-hole course in the U.S.), Pine Lakes Country Club in Myrtle Beach, Heron Point in Hilton Head, and Kiawah Island’s Ocean Course, which was the site of the 1991 Ryder Cup tournament.