Skip to content
Home > SC > Greenville > Where to Live Now > Give Greenville, SC a Closer Look

Give Greenville, SC a Closer Look

What if there were a place that provided a world-class arts scene, beautiful scenery and plentiful opportunities for career advancement, yet is still affordable? That’s Greenville, South Carolina. 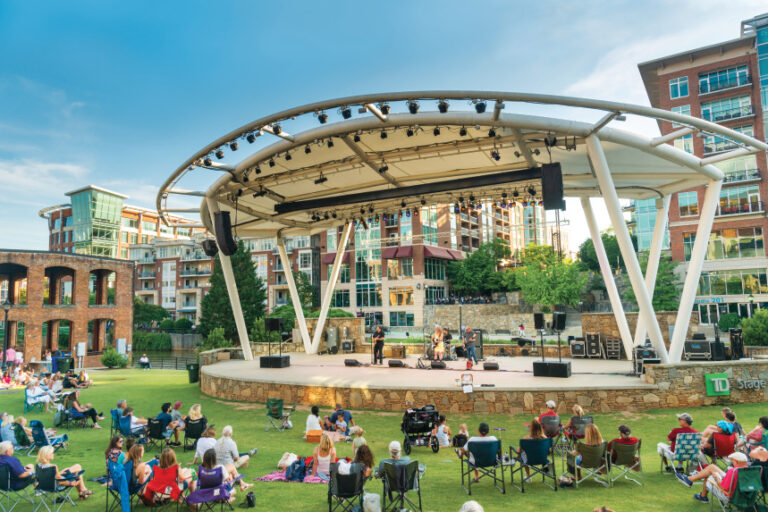 Located about halfway between Atlanta and Charlotte, Greenville has more than enough to make trips to larger places totally unnecessary. With a population of around 523,000 in Greenville County and a median home value of $239,000 as well as short commute times, living in Greenville comes free of the hassles and headaches that would come with living somewhere larger.

It’s easy to get around – and to and from – Greenville. Located along the rapidly growing I-85 corridor, Greenville is just 100 miles from the capital in Columbia and only 200 miles from Charleston. Though it provides ready access to major metros, it does so without the large metro traffic hassles.

Mean commute time is 22 minutes and nearly two-thirds of commuters have a commute of less than 25 minutes. But it’s not just convenience that makes it such a great place to live.

Dr. Marjorie Jenkins moved to Greenville with her husband in summer 2019, and two of her children have already relocated there.

“We love the livability and hospitality of Greenville and the opportunity to participate in so many different activities – the arts, hiking Paris Mountain, walking or biking along the Swamp Rabbit Trail,” she says.

As dean of the University of South Carolina (USC) School of Medicine Greenville and as chief academic officer for Prisma Health-Upstate, Jenkins lauds the region’s innovation and attention to detail when planning development.

“This school itself truly represents how Greenville approaches things. If we need it, we plan for it, build it and support it,” Jenkins says. “Prisma Health and USC worked with the Greenville community to build an awesome medical school in 2012, and each year, we graduate over 100 new doctors.”

Greenville has long been a manufacturing hub for many industries, including Lockheed Martin, but in more recent years, the Upstate region has also become home to financial institutions like Southern First Bank and TD Bank, and globally known companies like Michelin North America, Spectrum and GE Gas Power.

The Peace Center hosts productions of major Broadway musicals, concerts and artist talks, along with music appreciation events, master classes and arts camps. The 2021-22 season of Peace Broadway will bring productions of “Hadestown,” “Oklahoma!,” “Frozen” and “Hamilton” to Greenville audiences right in their own backyards.

“The seasons of the theaters, the Greenville Symphony, the Peace Center, the Greenville Chorale, along with visual arts programming such as First Fridays and Greenville Open Studios, are exciting,” says Alan Ethridge, executive director of Greenville’s Metropolitan Arts Council (MAC). “It will be very interesting to see what artists will create in response to COVID-19.”

In addition to plentiful options for live performances, Greenville is also home to a thriving local arts scene, and thanks to generous grants from the MAC, arts organizations in the area were able to make it through the pandemic ready to participate in events like Downtown Alive, Greenville Open Studios and Artisphere, an annual festival that almost 70,000 people attended in 2019 and that regularly creates millions of dollars in economic impact.

“We love the livability and hospitality of Greenville and the opportunity to participate in so many different activities.”

“For a city its size, Greenville has an amazing array of cultural offerings. Many much larger cities have significantly fewer arts venues and organizations,” Ethridge says. “There is such civic pride that is associated with Greenville’s art scene, along with a city government that is committed to providing public funding for the arts.”

That commitment and excitement for what Greenville is and what it’s becoming shines through and is its own selling point for potential residents, Jenkins says.

“There’s a very sophisticated and metropolitan feel for a city its size. Everyone is so proud of Greenville – from the Uber driver that brought me from the airport to the person who welcomed me at the Poinsett hotel,” she says. “Everybody had appreciation, pride and positive energy about their city.” 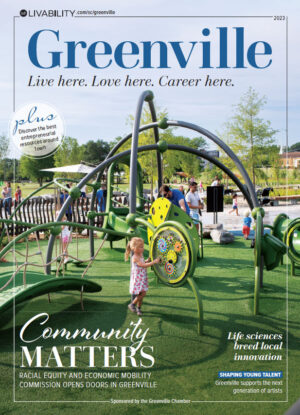