Skip to content
Home > SD > Sioux Falls > Where to Live Now > Why Sioux Falls, SD Is a Best Place to Live

Why Sioux Falls, SD Is a Best Place to Live 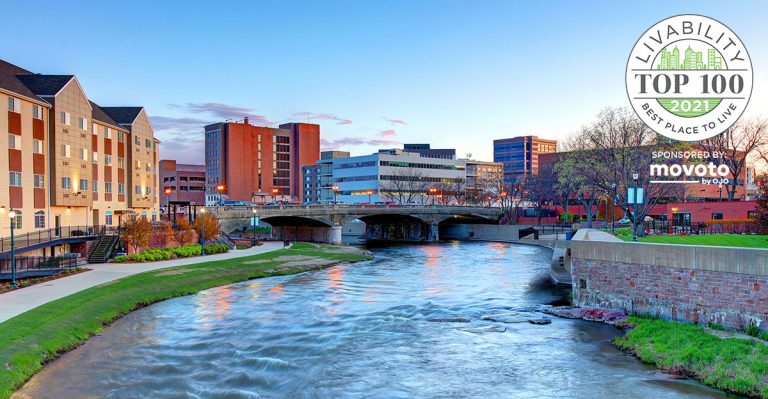 The town of Sioux Falls sits in a place where four states converge, which is fitting because it also sits at the intersection of rural charm and big-city culture. That balance between small-town vibe and urban opportunity is one of the biggest reasons the town is South Dakota’s largest – and one of its most exciting. It’s also what helped earn Sioux Falls a place on our list of the Top 100 Best Places to Live.

It’s undeniable that when people who aren’t from the midwest think about the midwest, they don’t think “arts and culture,â€ generally reserving those adjectives for big cities on the coasts. But driven by the presence of a tremendous academic culture, investments in its artistic community by organizations like the chamber of commerce and local government, and the hard work of nonprofit organizations like the Sioux Falls Arts Council, the city has built itself into a cultural center that residents of any town (even many much bigger ones!) could be proud of.

The town’s culture often spills out of the museums and onto the streets during summer festivals like the downtown area’s First Fridays, a major celebration with live music lining the streets of the center of town, or the annual Sculpture Walk, when exhibits of historical or cultural significance are exhibited. And sometimes it’s not just culture that spills into the streets during the town’s annual St. Patrick’s Day parade. All of this emphasis on the finer artistic things of life has led to the town’s motto of, “The Heart of America.”

Sioux Falls’ industrial makeup matches its eclectic artistic offerings. Health care is its biggest industry resident, but it’s also a center for finance, due at least in part to South Dakota’s lack of a state corporate income tax, and it houses major headquarters for businesses in the agribusiness, grocery and telecom industries.

Because of its relative isolation from other major cities, Sioux Falls has also grown a reputation for being a shopping and entertainment destination. Residents of smaller towns across the region are drawn not just to its art and music-loving culture, but also retail options like the 1.3 million square feet of shopping at the Empire Mall, which has been open since 1975, and boasts over 7 million visitors annually.

If you look at our top 100 places to live in the country, you’ll see most cities have one or two scores that boosted them onto the list. Sioux Falls got there by being consistently great across the board. Their highest score is in housing, with a median home value is $177,293. That means all those health-care executives are getting a great bang for their housing buck. But one of the biggest reasons Sioux Falls cracked the top 50 is that every one of their scores is good. Residents enjoy great home values, a range of employment and career options, solid infrastructure, and a culture that’s worth celebrating in the streets.