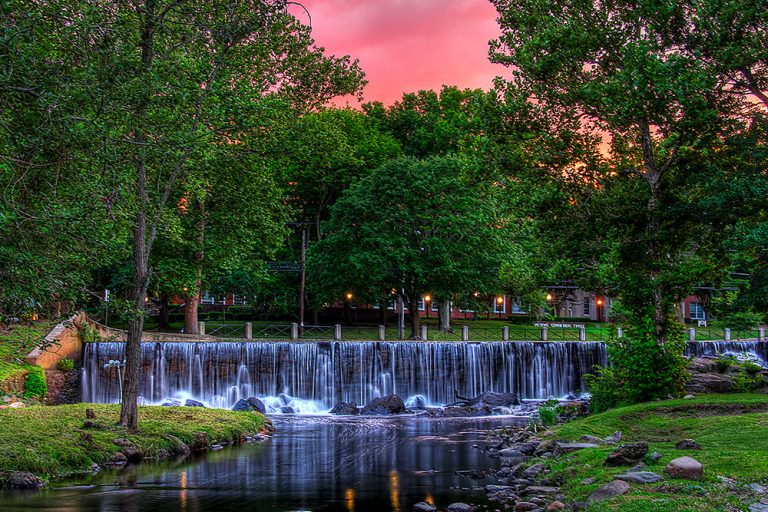 You usually find waterfalls deep in the wilderness, plunging off the side of a mountain or hidden in a forest. But what about the waterfalls that are located right next door to cafes, boutiques and nightlife? They exist, and they’re all the more exciting for being unexpected. We scoured the country to find the best urban waterfalls, and found eight you definitely don’t want to miss.

With at least 150 cascades in and around the city, Ithaca is a waterfall-lover’s paradise. It makes sense then that the city’s namesake waterfall, Ithaca Falls, is one of the easiest to reach. The trail is open year-round, even when others close for winter, and situated right at the edge of downtown, so you can walk there or park in the lot across the street. From the entrance, it’s a short, level path to the base of the falls where you can get close enough to feel the spray from this 175-foot-wide, 150-foot-tall powerful plunge over the cliff.

Spread across 32 acres in downtown Greenville, Falls Park on the Reedy isn’t just a place to snap a quick photo and move on. It’s a destination. Enjoy the free outdoor art, visit the gardens or join in a community event. The centerpiece, the 28-foot Reedy River Falls, makes up in fun what it lacks in stature. Broad rocks welcome sunbathers while Liberty Bridge, suspended above the falls, offers another vantage point to survey the scene. If you can’t get enough of it, stop by one of the nearby restaurants to dine al fresco while enjoying the best view in town.

These 7 Hot Spring Towns Are Actually Worth the Drive

Coming in as the second most powerful waterfall in the nation by volume, Willamette Falls is big enough that it stretches between two downtowns: Oregon City and West Linn. Want to check it out for yourself? Park in Oregon City and ride the Municipal Elevator (the only vertical street in the U.S.) up to the McLoughlin Promenade, an easy half-mile path along the bluff passing scenic overlooks and ending near a stillhouse and free museum. Better yet, if you’re willing to get a little wet, try one of the jet boat tours offered every the summer to experience Willamette Falls up close.

Spokane Falls is much more than one waterfall. Originally called Stluputqu, or “swift water,” by Native Americans, this natural wonder comprises a plethora of cascades, pools and eddies that form the centerpiece of a 100-acre park in downtown Spokane. The effect is stunning. The falls are conveniently laced with several trails and bridges so pedestrians can appreciate their beauty from all angles. After you’ve enjoyed it at ground level by bike or on foot, hop on the Spokane Falls SkyRide for a sweeping, 15-minute journey over the falls.

Not only are the falls of Middlebury in the middle of downtown, they’re almost underneath it. Historic buildings sit at the top of Middlebury Falls where Main Street itself crosses Otter Creek via a triple-arched stone bridge. To enjoy the postcard-perfect view of the falls crowned with Battell Bridge, head to Riverfront Park. From there, you can visit the Marble Works, a historic district facing the falls, or take a footbridge across the creek to the pleasantly walkable downtown filled with galleries, boutiques and eateries.

Thanks to its location at the southern tip of the Finger Lakes Region, the village of Montour Falls is surrounded by scenic cascades, but one of these is impossible to miss for any downtown visitor. The otherwise quiet Main Street runs straight into a small lawn fronting a thunderous, 156-foot waterfall. It’s sometimes called Montour Falls, but you’ll more often hear its Native American name, She-Qua-Ga, meaning tumbling water. A plaque in the park boasts an unusual claim to fame: the likeness of these falls hangs in the Louvre, sketched by none other than the future French king, Louis Philippe, around 1820.

Down the street from the opera house and across from the old blacksmith shop, Clifton Mill stands as a testament to time gone by. One of the relatively few operational grist mills in the country, the building in Clifton serves mainly as a tourist attraction – part restaurant, part country store. But the water-powered mill still turns just above a lovely narrow cascade that descends into the Little Miami River. You can get the best view of it by walking halfway into the covered bridge and peering through one of the windows. Go during the holiday season for a completely different look when the waterfall, bridge and mill twinkle with millions of lights.

If you’re wondering where the city of Sioux Falls got its name, you don’t have to look far. The 100-foot waterfall doesn’t drop all at once but in a series of cascades spread across the 123-acre Falls Park. It’s the city’s top attraction and with good reason. The park boasts an observation tower, museum, cafe, visitors center and the romantic ruins of a mill built to harness the falls’ power. A 29-mile greenway starts in the park and runs along the Big Sioux River into downtown where you’ll find all the urban entertainment you could want, from historic theaters to laid-back pubs to the free SculptureWalk.

These falls aren’t the biggest, and they’re man-made due to a dam, but the Lower Duck Pond Falls, as they are often called, create a picturesque setting in downtown Milford. With the backdrop of a white steepled church and a large lagoon facing the gold-domed town hall, this shallow but wide waterfall presents the classic New England small town tableau. As the name suggests, it’s also a great place to spot wildlife: fish, geese, turtles and plenty of ducks. The bridge over the lagoon, called the “kissing bridgeâ€ by locals, is a popular place for wedding photos.