New Development in Chattanooga Creates Community Along the Riverfront

The Bend is bringing new jobs and community to riverfront industrial property. 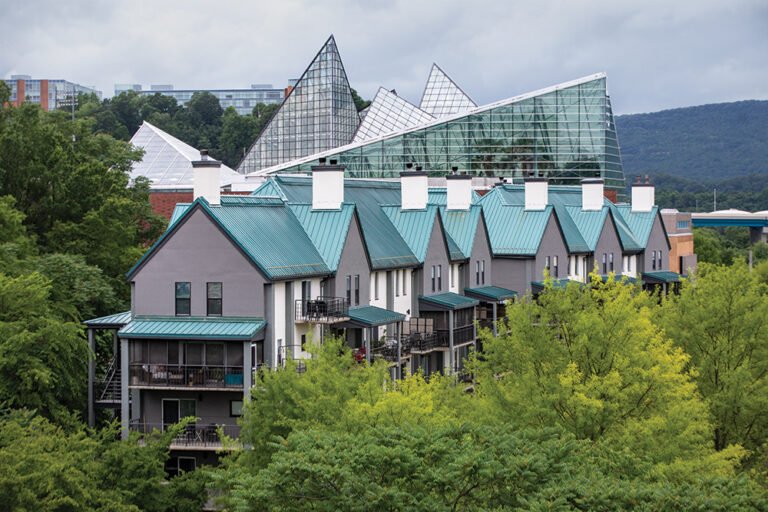 The scope of The Bend plan is enormous, comprehensive and moving very quickly into tangible reality.

White and Desai’s company, Urban Story Ventures, completed its initial land purchase and began marketing in January 2020. Since then, the site has received $500 million in investment and created 750 jobs.

“It was astounding to see that kind of demand,” says White. “It all happened organically over 18 months during the pandemic.”

Chattanooga’s economic boom is largely due to one forward-thinking idea that is years in the making: reconnecting the river to the community. Civic and grassroots efforts to do that began in the 1980s with Ross’s Landing district at the north end of downtown — gradually spreading south and east.

The Bend occupies the western edge of the downtown riverfront connecting Ross’s Landing to the Southside. Just downriver is the 140-acre former U.S. Pipe-Wheland Foundry property that is also being redeveloped.

“For years, the Olgiati Bridge was sort of the end of downtown but not anymore,” says Jim Williamson, vice president of planning and development, River City Co., a private nonprofit founded in 1986 to begin Chattanooga’s riverfront revival. “First, we saw housing creeping in that direction with Cameron Harbor. The Bend is a natural evolution.”

The Bend’s biggest success to date occurred when Australia-based NOVONIX purchased the 400,000-square-foot manufacturing facility that once produced nuclear turbines for Alstom. NOVONIX announced in 2021 that they would invest $160 million and employ 300 workers to become North America’s first manufacturer of synthetic graphite, a critical component in batteries for electric vehicles, which are experiencing explosive growth as car and truck makers shift to EVs.

“NOVONIX is in a great position at the very early end of adoption of electric vehicles,” says Charles Wood, chief economic development officer, Greater Chattanooga Economic Partnership. “The importance of their product for electric vehicles is so critical that Chattanooga has the ability to build a pretty significant industry cluster around the EV sector.”

Just outside The Bend site but in that same western riverfront area, another former industrial site has been repurposed as headquarters for an expanding local company in another significant industry cluster.

“Trident Transport is part of an industry sector that is really driving a lot of growth for the community,” says Wood. “There is a significant amount of talent in this market around freight brokerage, as it ties into the logistics sector. Trident needed to expand to add 150 new jobs.”

The Bend has leased or sold about 1 million square feet of existing space, including NOVONIX, over the course of a 10- to 15-year buildout; White anticipates building another 10 million to 12 million square feet. Starting in the fall and winter of 2022, Main Street and M.L. King Boulevard will extend to the river, with accompanying utilities and other infrastructure. New construction will follow in spring 2023.

“Right now, in the pipeline, we have approaching $800 million to $1 billion worth of projects in the design phase,” says White.

Those projects include multifamily residential, condos, medical offices and three corporate headquarters relocations. In addition, parts of the Riverwalk will be relocated to be closer to the river, which was not possible when the Riverwalk was built years ago.

“Compared to the area around the Aquarium — from the Hunter Museum to Highway 27 and from the riverfront to Fourth Street — our area is twice as large and our riverfront twice as long,” says White. “The impact on our city of that original vision was enormous. The Bend is act two, the completion of that vision. It will impact the city in the same way.”

In the Pipeline: New Industrial Parks are Born

The Bend is one of multiple sites in Greater Chattanooga being retooled for new industrial uses.

In December 2021, Hamilton County purchased the 2,170-acre McDonald Farm in the northern part of the county. New infrastructure, including water, sewer and highway access, will be needed before any commercial or industrial uses. Similar to how the 6,300-acre Volunteer Army Ammunition Plant became both Enterprise South Industrial Park (now home to Volkswagen, Amazon and other companies) and the adjacent Enterprise South Nature Park, the McDonald Farm is likely to see both industrial and recreational uses.

Historic buildings include a Greek Revival style house built in 1868, as well as smaller residences and several barns. Starting in the 1920s, milk, eggs and produce from the farm were sold in the family-owned Home Stores grocery chain. Advertising circulars for the grocery store eventually grew into the daily Chattanooga Free Press newspaper.

Once one of Greater Chattanooga’s largest manufacturing sites, the former DuPont nylon plant in Hixson was purchased in April 2022 by Chattanooga development firm Rise Partners, which plans to build 800,000 square feet of industrial and warehouse space.

At its height, more than 5,000 people worked there. The current owner, Kordsa, continues to operate a nylon-making operation. Plans call for new industrial buildings on 88 acres of former parking lots and land adjacent to the plant.

The site is one of the few in the southeast that can provide 100 megawatts of power because nylon manufacturing uses so much electricity.