Disney has entered the building. 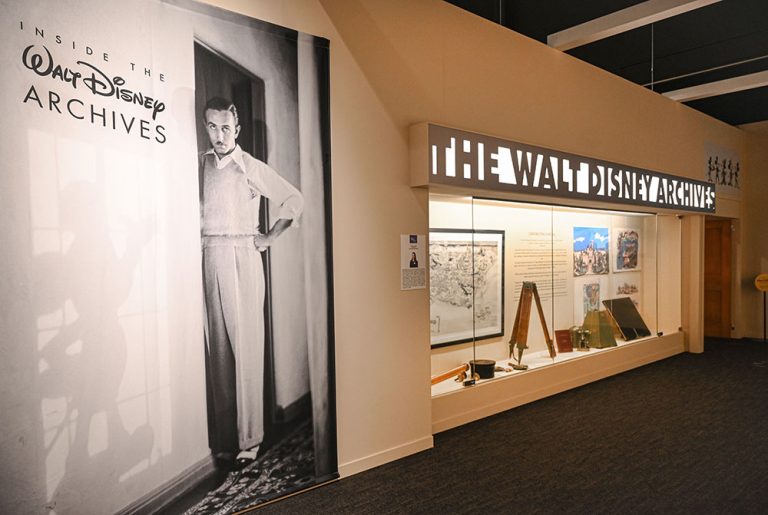 Graceland is celebrating the lifeworks of two legends in the heart of Memphis, TN.

Not only can you admire the life, work and home of the King of Rock ‘n’ Roll, but for a limited time, you can also celebrate the king of animation, Walt Disney.

“When we received the opportunity to work with Disney, we were excited about the partnership, and to be able to bring a brand-new Disney exhibit to Memphis considering the only other places this exhibit has been open was in Japan and California, we couldn’t pass it up,” says Alicia Dean, marketing promotions and events specialist at Graceland.

The exhibition’s story is told through original artworks, costumes and props detailing the magnificent story of The Walt Disney Company and Walt Disney himself.

Visitors may need to beware of hitchhiking ghosts when they visit and immerse themselves in Disney history. Nostalgic classics, like rarely displayed sketches from “Fantasia,” tombstones and hitchhiking ghosts from the Haunted Mansion and a prop storybook from “Snow White and the Seven Dwarfs” tell the Disney story from the beginning. Grim-grinning ghosts from all around will thrill at these Disney originals.

Modern-day favorites showcase the evolution of the Disney company with costumes from “Beauty and the Beast,” a maquette from “Frozen” and a “Wolverine” costume. Visitors can let it go and look for the bare necessities of Disney magic.

Some of the most popular artifacts among visitors include everyone’s favorite nanny, Mary Poppins’ original carpet bag, the beloved Wilson from “Cast Away” (thankfully washing up after that tearful goodbye) and multiple costumes from films, including “Maleficent,” “Pretty Woman” and “Walk the Line.” But, of course, you don’t want to make a “big mistake” like the clerk in Pretty Woman, so travel to Memphis to check out this incredible exhibit, only on exhibition for a limited time.

The Inside the Walt Disney Archives exhibit is displayed in the Graceland Exhibition Center through January 2, 2022. The center, built in 2019, is a state-of-the-art, 80,000-square-foot exhibition space that will be home to an ever-changing line-up of exploration showcases delighting visitors of all ages.

“It’s always an honor and a privilege to work with outside companies when we host different exhibits here at Graceland,” Dean says. “My favorite part of hosting this exhibit would be working side by side with the Disney professionals and learning about their extensive collection along the way. Bringing pieces of Disney history to Graceland is such a dream come true.”

Graceland is offering several events for Disney fans in conjunction with the exhibition, including tea parties, Disney trivia and much more. For a complete list of events, visit graceland.com/walt-disney-archives-events.

Lilo’s dreams have come true as the heritage of her creation is in full admiration, including the family photo of Lilo, Stitch, Nani, and David at Graceland, along with story sketches from the 2002 favorite. The story sketches include the moment Stitch rocks out in the well-known white jumpsuit worn by Elvis.

“The response to having this exhibit at Graceland from visitors has been extremely positive,” Dean says. “We’ve seen a lot of local visitors who came out to our complex for the first time and couldn’t believe how much we have to offer here at Elvis Presley’s Graceland. We’ve received so many compliments overall and also had lots of interest from bloggers, influencers and press from across the country expressing interest in visiting the exhibit.”

This magical exhibit is truly for dreamers of all ages. Everyone is sure to find one of their favorite Disney references in this exhibit with artifacts from such a range of grand Disney moments, including props from the Great Movie Ride, Davy Crockett’s raccoon-skin cap, the sword from “Zorro,” Jack Sparrow’s compass, the Congo Queen Model Boat from Disneyland’s Jungle Cruise, Lumiere and Cogsworth props from the live-action “Beauty and the Beast,” plus so much more.

Disney fanatics are welcome to appreciate all the dreams, memories, and entertainment associated with this collection, from movies to the parks.

Alongside the Disney exhibit, dreamers of all ages can immerse themselves in the life and legacy of Elvis Presley. The 120 acres Graceland comprises is dedicated to the King of Rock ‘n’ Roll’s life and career. From the gold records and jeweled jumpsuits to the classic cars and all-new interactive exhibits, Graceland lets you experience Elvis like never before.

Only steps away from the Graceland Mansion, The Guest House at Graceland welcomes Memphis visitors, music fans, Disney lovers, and guests worldwide with Southern hospitality, royal treatment, and luxurious amenities. You’ll feel like the King of Rock ‘n’ Roll himself when you complete your trip to Graceland with a stay at The Guest House.

Memphis is a city full of history, magic and soul. A road trip to a city with such character is a perfect getaway any time of the year. Now that you can celebrate two American legends, it’s the ideal time to head to West Tennessee and immerse yourself in the life and times of Walt Disney and Elvis Presley.

Remember, all that you’ve been waiting for is waiting for you at Graceland. So, detour to Memphis for one of the most magical exhibits and much more. Special guided tours are available for booking, so that you won’t miss a minute of the magic or rock ‘n’ roll.

Plan your supercalifragilisticexpialidocious trip at graceland.com.