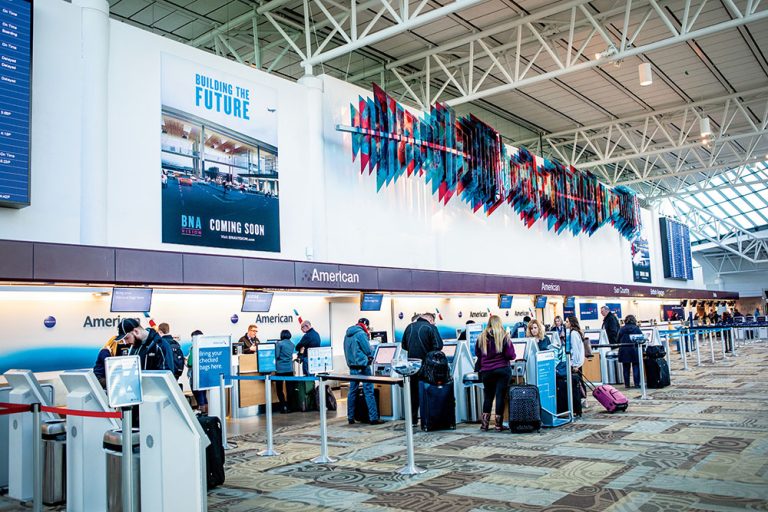 Proximity to Nashville International Airport (BNA) is a huge benefit to air travelers throughout the region, and those from Williamson County account for 20% of the airport’s traffic.

“So for the 16 million passengers we accommodate annually, that’s about 3 million coming out of Williamson alone,â€ says Doug Kreulen, president/ CEO of the Metropolitan Nashville Airport Authority (MNAA).

Kreulen is himself a Williamson County resident living in Franklin, and he says much of his attention these days is focused on a $1.2 billion construction expansion project currently occurring at BNA.

“Our renovation and expansion plan is known as BNA Vision and has many components, with several completed, several underway and others still to come,â€ he says. “Once Vision 1.0 is finished, we’ll move to the next phase of expansion at BNA to accommodate the rapid increase in passenger traffic.”

Kreulen adds that no local tax dollars are used to fund these projects or otherwise operate the airport.

“For the most part, the money comes from the people who use the airport,â€ he says. “If you use BNA to travel, you are paying a small fee on your ticket that goes toward capital projects. Together with revenue collected from the airlines, parking and concessions, we have thus far been able to fund our infrastructure needs.”

Kreulen seems to be an ideal candidate to lead BNA during its expansion project, with much aviation, operations, strategic planning and overall command experience. He joined MNAA in 2012 after four years as director of operations at Huntsville International Airport, and prior to that served 27 years in the U.S. Air Force, earning the rank of colonel.

As for major projects currently under construction, Kreulen says they include an expansion of Concourse D that will give BNA six new gates, plus the airport’s existing Ticketing Lobby and Baggage Claim areas are being enlarged. A new six-level parking garage will also be added with 3,000 parking spots, and the airport’s future administrative offices will be on the top level of that garage.

“Meanwhile, a major project on the horizon will be expanding the center of the airport for more security, a mall area and more international gates and customs,â€ he says. “That is in design now and will soon get underway. We’ll end up closing the middle of the airport for two-plus years, but even though customers are seeing a lot of construction going on, we are striving to make the entire process as smooth as possible. We still want to make flying out of BNA as comfortable an experience as it has always been.”

“BNA is one of the main reasons my company is able to do what we do on a daily basis – it’s our connection to our work and clients,â€ Atema says. “As owner/ CEO, I need to get to lots of destinations, domestically and internationally. I am usually flying somewhere weekly, and I almost take for granted that I can park and be through security in less than 20 minutes. That’s unheard of in most airports.”

Atema says he has an office and warehouse in Las Vegas, so he flies there often.

“But I am also just as likely to go visit our staff in Denver, or a show in Los Angeles, Orlando, Dallas, Seattle, London or the Dominican Republic,â€ he says. “BNA is not only important to my work, but it’s crucial for the majority of our staff and many of our contractors who are flying from there to serve our clients all over the map. BNA contributes to our ability to grow as quickly as we’ve been able to, and it is vital to our success as a global company.”

Flights are available to 65 nonstop markets including:

Williamson County: Cocktails or Coffee, Anyone?