These charming towns — complete with quirky traditions and enthusiastic locals — are a dream come true for 'Gilmore Girls' fans. 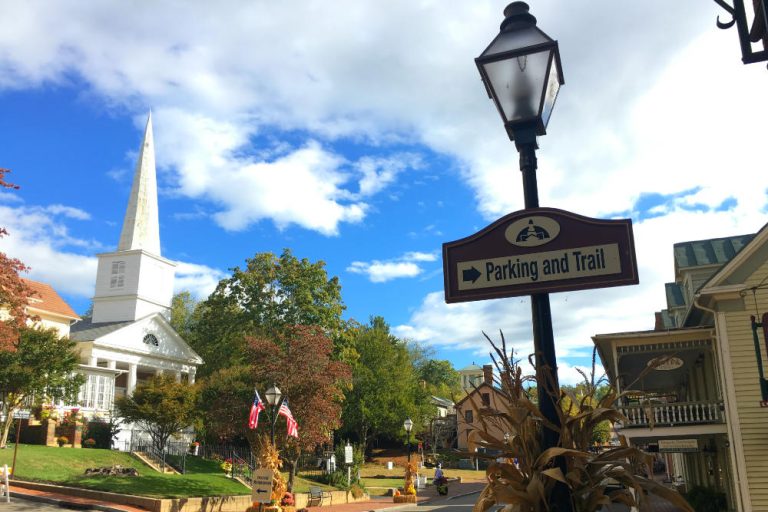 Whenever I get a hankering to watch “Gilmore Girls” again (for the sixth or 600th time), I feel less of an urge to revisit a storyline and more of an urge to revisit a place. Stars Hollow, Connecticut, is the fictional New England town where the show’s heroines live, work and caffeinate. It’s an idyllic community of quirky townspeople, charming businesses, and a shared commitment to eccentricity. (In season two, diner owner Luke Danes rants that Stars Hollow has “twelve stores … devoted entirely to peddling porcelain unicorns.”)

The warmth and magic of this small town is what lures me back to the world of “Gilmore Girls” over and over again. But as much as we wish we could sit in the town square gazebo and gossip with Miss Patty, Stars Hollow remains firmly trapped within the four edges of a screen. Instead, here are five real towns around the country you can visit whenever you need a Stars Hollow-level dose of charm and whimsy.

Jonesborough is the oldest (and possibly cutest) town in Tennessee — founded the same year as Stars Hollow, in fact, in 1779. Their chief claim to fame, in classic Stars Hollow fashion, is the International Storytelling Festival, which consumes the town every October for a week of fall foliage, fried food and folktales. Of course, no Stars Hollow doppelgänger would be complete without a few wacky shops, and Jonesborough has plenty. Pop into the Crafty Peddler, the Sewing Bee, or the Posy Shop while you’re there, but as always, be wary of employees named Kirk.

What Are the 10 Best Small Towns in America? Click Here to Find Out!

If you don’t mind a few palm trees, Winters, California, does a solid West Coast impression of Stars Hollow. From the scarecrow contest to the Winters Salmon Festival, there’s always an eccentric community event going on in this town. Or, if you’re in search of a Sookie and Jackson vibe, check out the holiday tractor parade each December. Local farmers decorate their tractors in Christmas lights and coast down Main Street toward the picturesque downtown square. You can even watch the festivities from (where else?) the Rotary Park gazebo in the center of town.

An hour outside of Austin, you’ll find the unincorporated district of Gruene, Texas (within the city limits of New Braunfels). Think of Gruene as the Stars Hollow of the old west. You can browse 6,500 square feet of antiques at the Gruene Antique Company (which is impressive even by Mrs. Kim’s standards), or host your very own 24-hour dance marathon at Gruene Hall, the oldest dance hall in Texas. The Gruene General Store has been in business since 1925, and it’s still the perfect place to stock up on junk food for a Gilmore-caliber movie marathon. And consider this: if you need to pull a Lorelai Gilmore on laundry day by wearing cut-off shorts and cowboy boots, you’ll fit right in!

Oberlin, Ohio, is Stars Hollow with a Midwestern twist. First of all, this town is Taylor Doose-level obsessed with its history. There’s even a yearly reenactment of one of the town’s foundational stories — but instead of kooky townsfolk standing outside all night in the snow, Oberlin reenacts the story John Price, a fugitive slave who escaped the clutches of slave catchers with the help of Oberlin residents. In the spring, Oberlin hosts a big parade (no, really — it’s called “The Big Parade”) just to celebrate how much people like it there, and anyone in the community can participate. Student groups, local unions and the public library all show up with homemade floats, and the weird and whimsical are heartily praised.

Washington, Connecticut, is probably the most famous Stars Hollow stand-in, because it’s the real town that inspired it! “Gilmore Girls” creator Amy Sherman-Palladino visited Washington during a vacation to Connecticut, and she was so charmed by the small-town magic and camaraderie that she funneled her experience straight into the show. But Stars Hollow doesn’t just mirror Washington with its colonial look and chatty residents. The town is run by a traditional form of New England government that includes volunteer committees, a selectman, and yes, even town meetings. Don’t forget to bring snacks!