5 Royal Items in the US (And Where to Find Them)

From a very famous desk to the home of a future Duchess, we tracked down some royal relics that you don't need a passport to see. 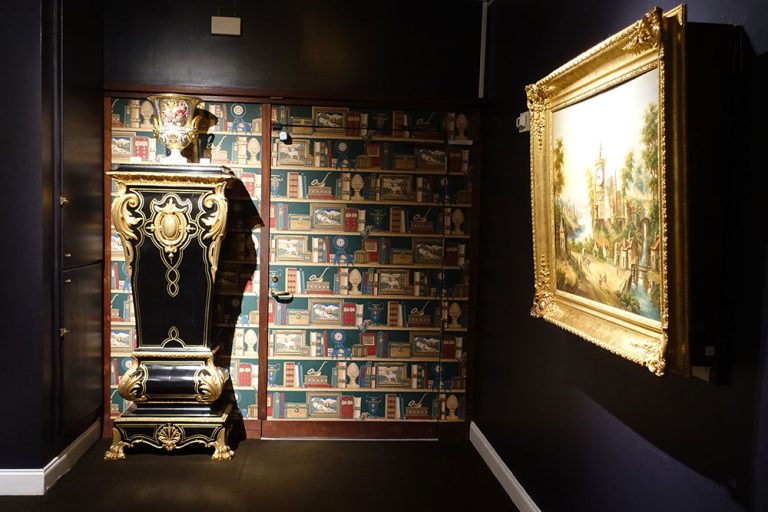 New Orleans / Courtesy of Jeremy Thompson under a CC 2.0 license.

It seems the whole world has been afflicted with royal wedding fever these past few months, and this weekend (finally!), we’ll all tune in to watch American actress Meghan Markle marry Britain’s beloved Prince Harry. All this royal talk got us thinking: what kind of royal memorabilia do we have here in America? While the United States unfortunately doesn’t harbor any of the Crown Jewels of the United Kingdom, we do have some royal relics you can see for yourself – in some surprising places.

Located in East Falls, Philadelphia, the childhood home of Princess Grace of Monaco is now declared a national landmark. The 4,000-square-foot home was built in 1928 by Kelly’s father and Prince Albert II’s grandfather and features six bedrooms. In 2016, Grace Kelly’s only son, Prince Albert II, purchased the landmark for just $754,000 with the hopes of restoring it.

Now, after being out of the family for half a century, the house has been recently restored back to its former glory – and even features a twin bed Kelly herself slept in and height marks on a closet door from when the actress was growing up.

This renovation is important in preserving the culture of the small Philly neighborhood of  East Falls, as being the home of the princess is what the neighborhood is most known for. The house won’t be a full-time museum, but will host tours and various events.

Given by Queen Victoria to President Rutherford B. Hayes in 1880, the historic Resolute desk is housed in Washington D.C. and has been used by every president since, minus Ford, Nixon and Johnson. The desk was crafted from the wood from British ship H.M.S. Resolute. It has made its rounds in the White House, moved from the President’s Study to the Broadcast Room to be used by Eisenhower for radio and television broadcasts. It was first moved to the Oval Office in 1961, where it still sits today.

Needless to say, this desk is an incredible piece of history, given by the Queen to symbolize friendship between the two nations.

The soon-to-be-duchess/actress Meghan Markle grew up in a quaint, one-story, two-bedroom home in Crenshaw, Los Angeles. The home is currently valued at around $700,000, but it’s not for sale, as Markle’s mother, Doria Ragland, still lives there.

Sometimes called the “Black Beverly Hills,â€ Crenshaw is a neighborhood of rich cultural influence and has spawned talent like Tina Turner, Ice Cube and Tom Bradley. The neighborhood is in the midst of a transition, but its incredible views and proximity to a princess’s childhood home have garnered lots of attention.

If you have $88,000 lying around and love the royal family, you could snag these cufflinks. The cufflinks were once owned by the Duke of Windsor himself, Prince Edward, and feature hand-painted portraits of King Edward VII and Queen Alexandria.

After being crowned king the same year, Edward abdicated the throne to marry his love, American socialite Wallis Simpson in 1936. Edward enjoyed these cufflinks among many others from his noteworthy collection until his death in 1972. Now, the cufflinks reside at the historic M.S. Rau Antiques in New Orleans, Louisiana, which has become a staple in New Orleans for high-quality antiques and is a great place to find something truly royal.

Just minutes away from the Baltimore neighborhood where Wallis Simpson, the famous Duchess of Windsor, grew up, Philip Baty and Ron Peltzer’s impressive Wallis Simpson memorabilia museum is comprised of more than 700 objects. While more of a collection than a museum (it doesn’t have hours and isn’t open to the public), the owners used the Baltimore-based space for special events.

The items range from dishes and coronation cups to jewelry, and you can own a slice of history, too. Baty and Peltzer are auctioning off their prized possessions this month in preparation to move – just in time to cash in on the buzz surrounding the royal wedding.