From events that celebrate the city to cultural offerings, there’s almost always a festival happening in Knoxville. 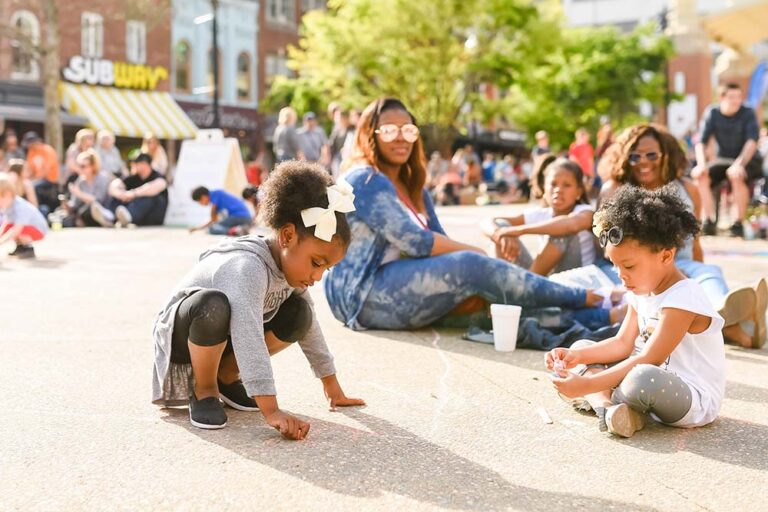 Knoxville, Tennessee, is a creative and diverse city, both of which are traits the community celebrates with festivals throughout the year.

“People don’t normally think of Knoxville as a culturally diverse place with an international feel, but we have a great community here that really rallies and pushes for these different cultural festivals,” says Azsha White, co-founder of the Knox Asian Festival. “People in Knoxville don’t have to travel to New York or Atlanta — if you want to touch a culture, it’s in your backyard all year long.”

From events that celebrate the city like the Dogwood Arts Festival in the spring to cultural offerings such as the HoLa Festival to music fests like Big Ears, there’s almost always a festival happening in the city.

“We have a little bit of everything and something for absolutely everybody to enjoy,” says Kyndra Brewer, Director of the City of Knoxville’s Office of Special Events. “We’re beyond excited to bring back our events — the feedback from the community has been phenomenal.”

Here are 15 Knoxville festivals worth checking out.

This pan-Asian festival is one of the country’s largest, representing Japan, Korea, China, Pakistan, India, Thailand and many other diverse Asian cultures. The event features vendors serving authentic Asian cuisine, a parade with traditional costumes from each country, two stages with drumming, dancing and music, and booths that tell stories of each country and its culture. The event draws more than 65,000 visitors from around the world.

For the past 42 years, lovers of Hellenic culture have gathered at Saint George Greek Orthodox Church over an entire weekend in the fall to enjoy the traditions of Greece. Dancers in embellished garb perform folk and modern dances with a live band, a marketplace offers Greek gifts, jewelry and clothing plus Greek culinary products, and of course, plenty of Greek flavors to sample. Before you know it, you’ll be shouting “Opa!”

Tennessee’s largest festival celebrating Latin American arts and culture and Hispanic Heritage Month, this fiesta is in its 22nd year. The event features food, music and dance performances, and Latin American arts and crafts booths over a weekend in October at the World’s Fair Park Performance Lawn. The event kicks off with fireworks and includes a special day for families with a Parade of Nations.

Featuring 50 hours of entertainment by more than 700 artists on five stages, the Rossini Festival features school choirs, community choruses, orchestras and bands, dancing from ballet to folk to flamenco, ensembles and jazz bands — and most importantly the singers of the Knoxville opera, whose tenors, sopranos, baritones and mezzo sopranos perform arias from famous operas. Spanning several city blocks, the event includes food and drink vendors, artisans and demonstrations.

Taking place since 1989, the Kuumba (‘Creativity’ in Swahili) Festival is a free event presented by African American Appalachian Arts Inc., an organization that focuses on social and community development through cultural programming. Taking place at three locales in Knoxville, the event showcases local African American art and artists alongside vendors from all over the world. The festival includes drum and dance circles, performances of music and spoken word; and traditional clothing, crafts, and food.

Irish Fest on the Hill

For the past 15 years, Mardi Growl has featured hundreds of furry revelers in costume taking to the streets of Knoxville for a costume contest and dog show, followed by an after party. The festivities benefit the Young-Williams Animal Center, a shelter that strives to pair pets with their forever families.

The Queen of Country deserves her own festival, and Dollyfest does not disappoint. Held in Knoxville’s historic Old City, a weekend dedicated to the glory of Dolly Parton is held each year to benefit the star’s nonprofit organization, Imagination Library, which gifts books to children from birth to age 5. The festival features Dolly specials at shops and restaurants, a stage with Dolly-inspired performers and a maker’s market featuring Dolly-themed wares, Dolly karaoke and a Dolly costume contest.

What do you get when you combine an outdoor enthusiast, a dog lover and a craft beer lover? This isn’t a clever one liner – it’s the theme of the Bike, Boat, Brew & Bark Festival, celebrating a few of the things that make Knoxville a great place to live. Knoxville Adventure Collective offers SUP and kayak classes in the Tennessee River, there are walking tours of historic Knoxville, guided group hikes, several breweries offering stops along a cycling brew tour, and a casino boat cruise.

Held each April when the dogwood trees bloom, the Dogwood Arts Festival has been one of the city’s most celebrated annual events for more than 60 years. Taking place in the heart of downtown Knoxville at World’s Fair Park, it features food trucks, live music and of course, art. The gathering of arts vendors includes fiber arts, jewelry makers, mixed media, painting, photography, glass and sculpture.

Like its name suggests, Big Ears is a music festival. But not just any music festival – over four days each spring, more than a dozen unique venues throughout Knoxville, including historic theaters, churches, parks, galleries and intimate performance venues, come alive with music, film, literary gatherings and more. Going strong since 2013, its nearly 200 live performances have stretched into year-round (and virtual) programming, too.

Celebrating Knoxville’s LGBTQ+ community and its allies, this annual festival promotes inclusion and equality. It includes one of the state’s biggest parades, followed by a party at World’s Fair Park that includes local and national celebrities, drag queen performances and the Knoxville Gay Men’s Chorus. Events popping up over the weekend of Pridefest throughout the city help draw some 40,000 attendees annually.

Festival on the 4th

Christmas in the City

Knoxville’s holiday festival, which spans several weeks, is like a Hallmark holiday movie on steroids. It features a Christmas parade with bands, floats, Christmas lights and Santa Claus; a tree-lighting celebration, an outdoor ice-skating rink, a drive-in holiday movie with Santa visits and a traditional holiday craft market and more. The event culminates in a New Year’s Eve party complete with a ball drop.