Live music is plentiful in Knoxville, and you're sure to find local craft brews on tap nearly anywhere you go. 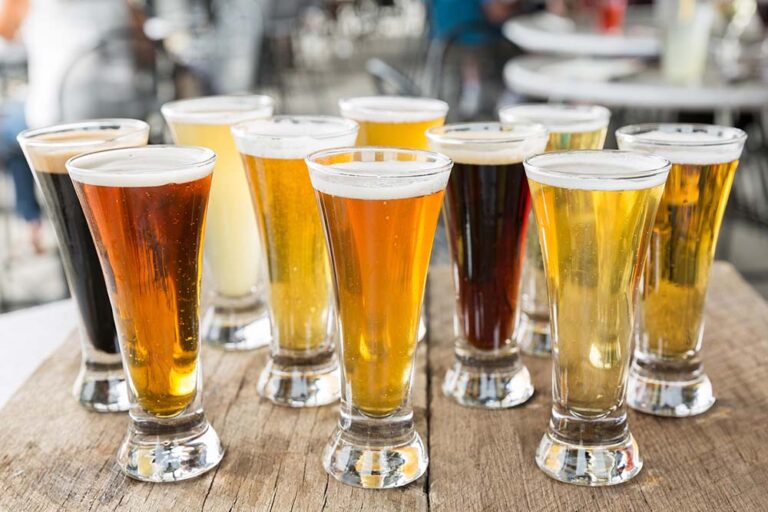 Craft beer and live music go together like peanut butter and jelly, and Knoxville, Tennessee, is the ideal place to find cold brews and cool tunes.

You can find live music pretty much any night of the week, from big-name touring acts to singer-songwriters performing at local watering holes. And there are plenty of places to sample unique beers in the city, including more than 20 craft breweries. So, grab a pint and listen up!

Knoxville’s craft beer scene has exploded from just four craft breweries to more than 20 in just a decade. Knox Brew Tours offers guided tours, including a downtown walking tour, a Brew Bus tour and even a Bike & Brew Tour.

“We’re taking people into spaces in the brewery that you could not go into otherwise,” says Zack Roskop, owner of Knox Brew Tours and president of the Knoxville Area Brewers Association. “We give people all this information — we’re using storytelling, guided tastings, information and education to connect people to our brewery community and to these breweries, make them fans and create a strong relationship.”

Sample Them All on the Knox Ale Trail

To promote local brewers, the Brewers Association created the Knox Ale Trail, a self-guided tour that allows people to go to breweries, get their passports stamped and get prizes.

While visiting the 20+ breweries in the area is a lofty (and fun) goal, the Knox Brew Hub is the perfect stop for those who are in town for a short time and can’t possibly fill their passports. A craft beer bar started by Roskop during the pandemic, the newly renovated space in the heart of downtown serves as a “visitor’s center” for Knoxville beer. It features a map of all the area breweries, a vast collection of brew tap handles and 23 locally made beers on tap.

Over the past eight years, Knox Brew Tours has given nearly 20,000 people a behind-the-scenes peek at Knoxville’s breweries, Roskop says.

“We’re not a party bus — we don’t drop people off. Our tour is very organized, thoughtful and hands-on,” he says. “We offer a guided craft beer experience that is literally a backstage pass, and we are 100% focused on giving our guests full access to the facilities.”

You can catch live performances nightly at a variety of venues in the Old City, a historic district that’s been revitalized. And with national touring acts performing at Thompson-Boling Arena on the University of Tennessee campus to more intimate shows at the Tennessee Theater or the Bijou Theatre, there’s quality as well as quantity.

“We’ve had a lot of top volume shows — we’re within a day’s drive for (nearly two-thirds) of the U.S. population, so bands come through here — plus Tennessee is one of the most beautiful places in the country,” says Garrett Thompson, founder of Born and Raised Productions, a boutique music promotion company.

Because Knoxville is on a circuit with bigger cities like Atlanta, many top acts will make it a stop. Plus, Knoxville’s more affordable cost of living draws many talented musicians who decide to call it home.

Born and Raised Productions creates one-of-a-kind events and music experiences. In 2014, the company started hosting “secret shows” at different venues throughout town that instantly sold out as soon as they were announced.

The company is behind the popular annual music festival Sunset on Central and created The Outpost, a temporary space where in a span of six months it hosted everything from silent disco to local talent to Grammy-winning acts. They’ve also collaborated with Pretentious Brewing Co. to create intimate patio concerts, blending two of Knoxville’s top assets.

Numerous local festivals bring music and beer together in harmony, including the Kill the Lights Festival, Brewer’s Jam and Beerfest.

“What makes Knoxville’s beer-brewing community so special is that they have a shared passion and all came together and faced challenges together and bonded,” says Roskop. “It’s what has made our community so strong. I love that they’re all so different — each has found a unique niche to be themselves.”